Here we get to see all the Cover Art for the entire Wars of Light and Shadow Series by Janny Wurts and we get to talk about the symbolism and meaning of the different images.

With the help of Janny who has provided all this amazing art for our BR, we will talk about each cover and note down what every single detail signifies. (or at least we'll try to! :D)

From Janny:
Side comment, here is some fun for your discussion that you haven't yet broached: cover art.

There is symbolism behind every single element in every single cover art, chapter head, end piece - even in the USA covers that were portrait style and the older style 'landscape' covers done in the UK - every element has a hidden or NOT so hidden meaning.

And the icon artwork too.

All of the details matter not just those set into the words; there is a lot in the images, too.

Please feel free to take part and contribute with suggestions. :)

Note: All the Cover Art on this thread is done by Janny Wurts and Don Maitz.
A big THANK YOU from us Janny, for being allowed to use it in this BR!

The Curse of the Mistwraith 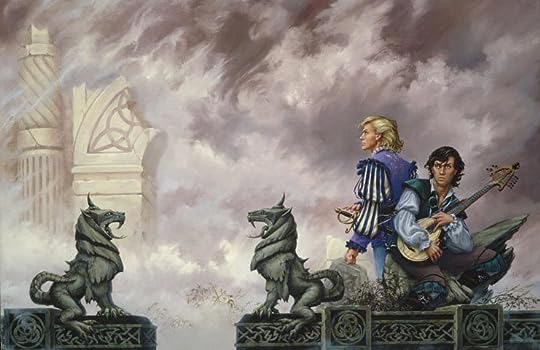 The Gargoyles – represent the Seardluin - a vicious predator that lived on Athera in the First Age, and was rendered extinct in the Second Age, under Fellowship assistance. They were the 'scourge' of Paravian survival - and the 'gateway' formed between the facing statues signifies the ancient historical conflicts, giving way to the new

Lysaer and Arithon
Lysaer is facing AWAY from the viewer/you are following HIS lead/Arithon is facing the viewer - his priority IS that one on one compassion that he cannot turn from by nature.

Character footing Arithon crouches on top of the Paravian-runed wall = the Paravians accept/embrace him?
Lysaer stands behind them, with the wall/runes at his back = he turns away from the Paravian legacy and is also rejected by the Paravians at the same time?

The Mist - seems to recoil from the Paravian runes and form as if to attack from behind, straight in the middle of that destroyed arch. Why? 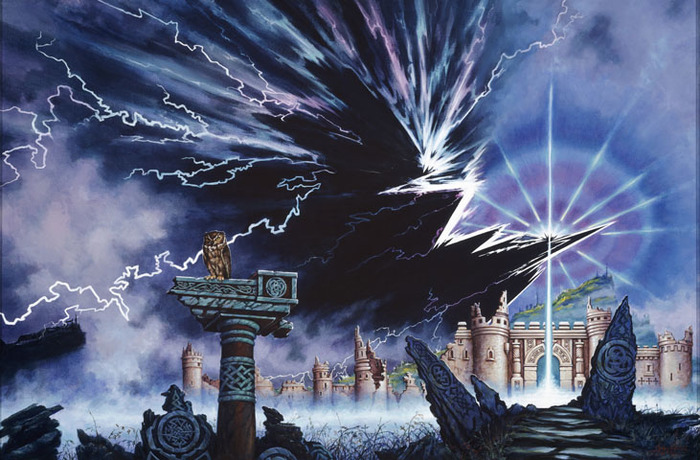 The softer light = energy outside the human sight but well within range of mage-sighted talent. Wards

On the walls/pillars - Paravian runes - directional, six sided figures for safeguard, matched to the cardinal points and vectored above and below; an'alt, the configured symbol for infinity, stamped over and over; as well as the symbol for the Paravian Races

The Lightning - What does it strike and why there? 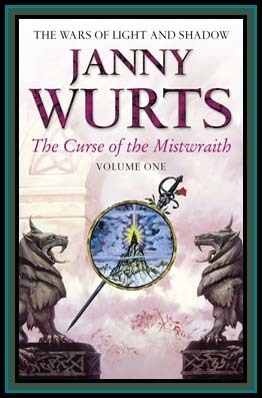 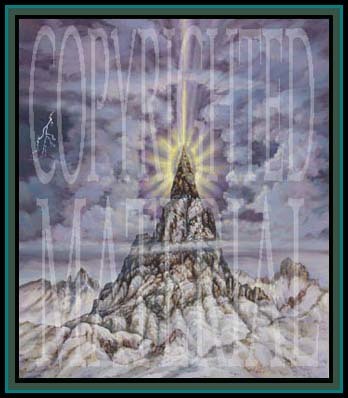 Background - the mountain when the Mistwraith was imprisoned - Rockfell Peak, and what you are seeing 'in the energy' is the Fellowship's working in progress - including the 'interaction' with the clouds. 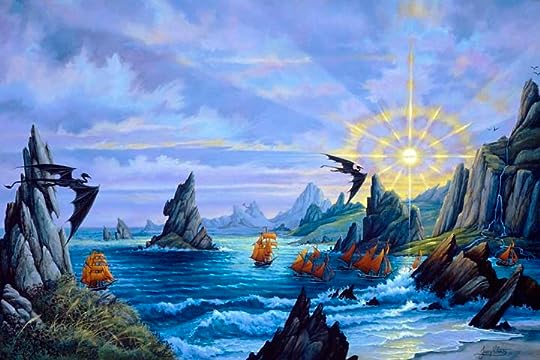 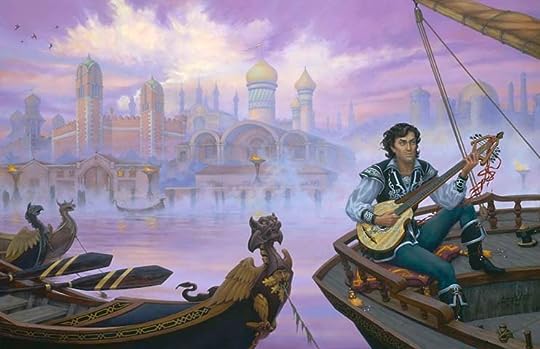 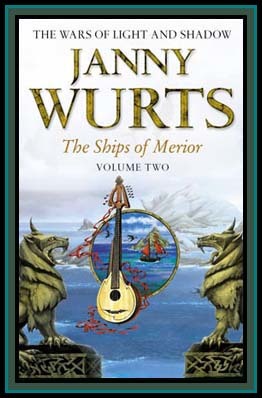 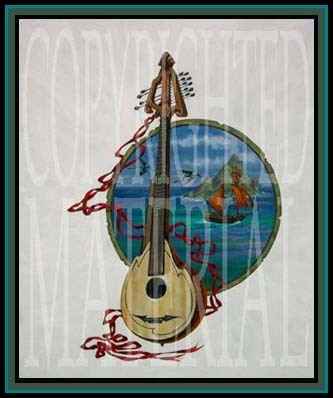 Arithon's Lyrante with the ribbons - the streamer on the sword and on the lyranthe both signify the entanglement with the Mistwraith's Curse and the bloodshed that mires the characters' actions. 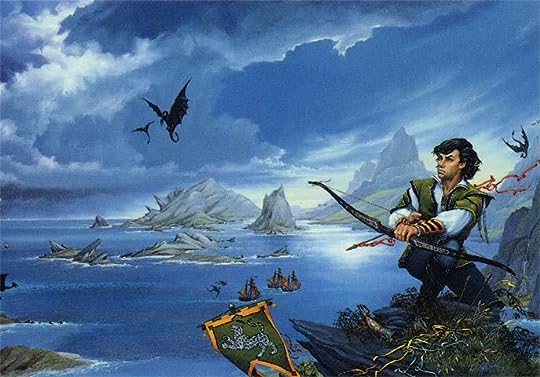 The red ribbons on the arrows are the colors of the signals fired from the cliff to orchestrate the action at the Havens. Red - the killing/Yellow - the fire/White the cease fire and for healing. 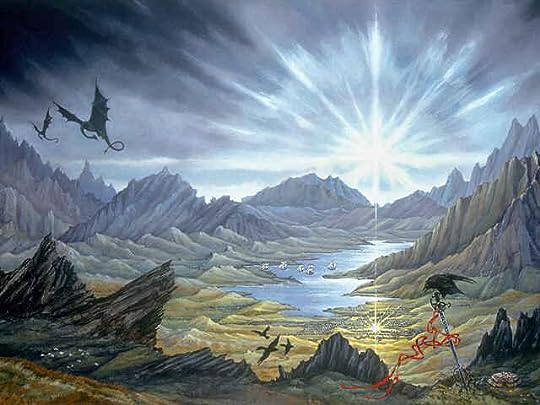 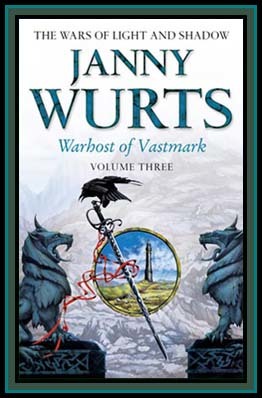 The raven perched on the sword with the red ribbons on the background of Althain Tower - ? 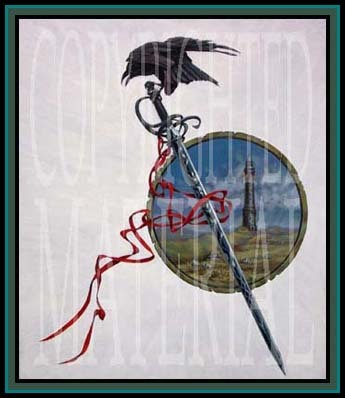 The raven perched on the sword with the red ribbons - ravens have strong connotations with the aftermath of battlefields - it's a smaller reflection of the mythos - and doesn't just signify War, but the crossing over between life and death. The greater meaning - and there is one, relates but is a whole lot bigger than what happens on a battlefield – to watch out for 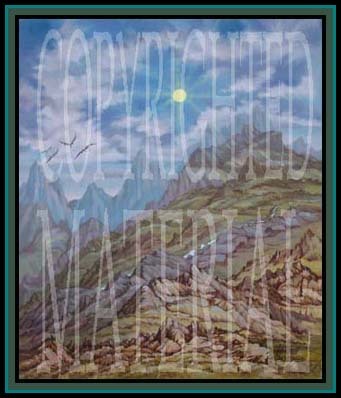 In Curse - Lysaer has the sword, or the advantage, Arithon is in retreat, which is why the sword is pointed to Lysaer's side.
The handle is towards the one who's got an advantage
In Ships the sword is replaced by the Lyranthe that Arithon holds = the stalemate caused by Arithon pursuing the path of the masterbard. It is straight on the background of a ship = Arithon's escape plan causes the stalemate

In Warhost the sword points the other way around = Arithon fights back.

Sword facing left/right = Left side and right side have defined attributes - which?

The Sword is exactly positioned in between the 2 princes if you see both covers. (as if cutting between them) = the conflict, the battle begun 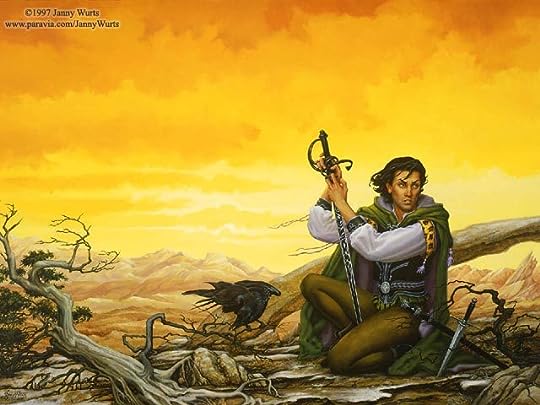 Again The Raven and the Sword - this time sword held by Arithon with the Raven perched beside them - Why?
to watch out for 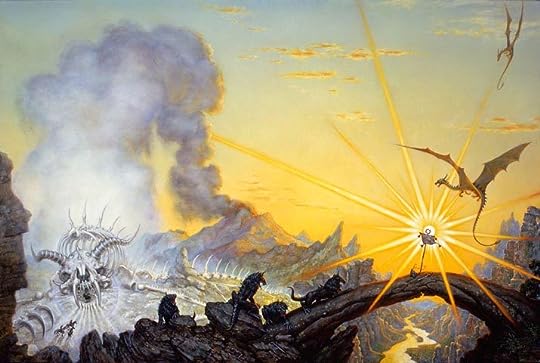 Landscape - the Grimward - Seardluin and Wyvern and again the softer light (energy outside the human sight but well within range of mage-sighted talent. Wards)

Lower left corner - skeleton of a Grand Drake. In between his jaws - Asandir; and riding toward the skeleton's jaws Dakar, Arithon and Felirin 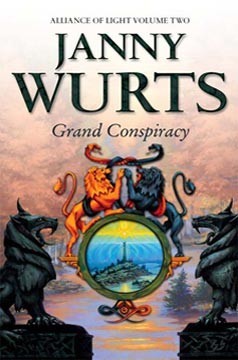 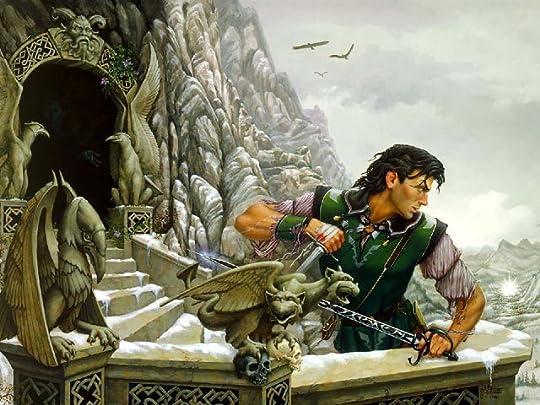 Jieret's vision from Chapter 12. The entrance to Davien's sanctuary? Inside, in the dark, a ghost like appearance is seen. Is that Davien? 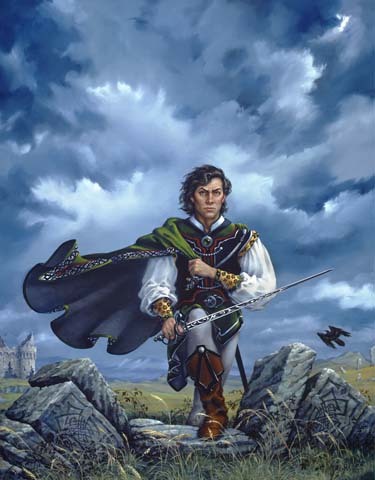 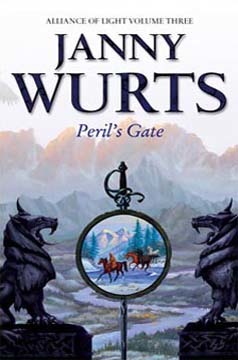 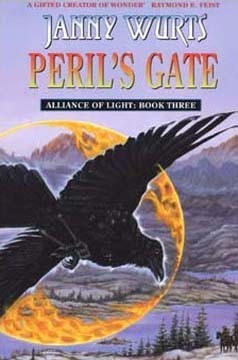 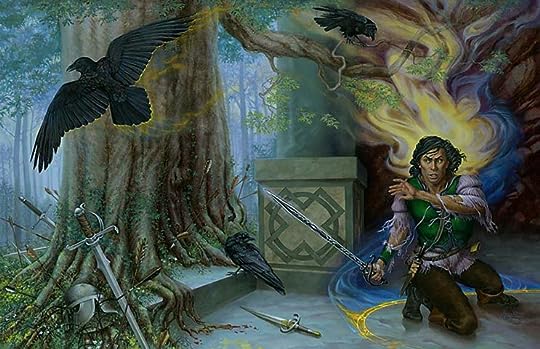 I was not able to find the second photo in bigger format that includes the back cover. This is the hardcover I own and the image continues onto the back side of the book with a landscape. 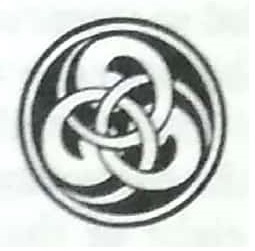 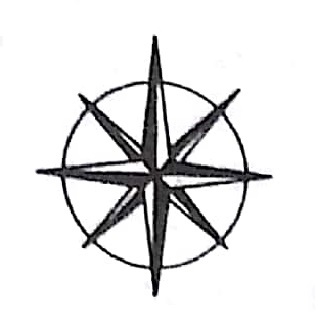 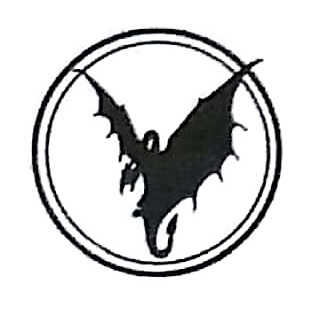 Meaning - The Wyvern - the least of the Drake Spawn 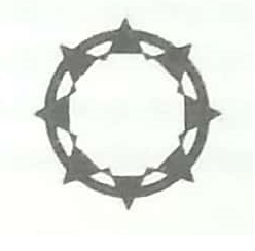 Meaning - The Sunwheel - the symbol of The Alliance of Light

will update the symbols for the next 2 books tonight.

Jieret's vision from Chapter 12. The entrance to Davien's sanctuary? Inside, in the dark, a ghost like appearance is seen. Is that Davien?
"


I don’t see a ghost inside the cave. But Davien is a good guess

Warhost of Vastmark
Meaning - Triaxial pattern based on thirds and spirals that don't just radiate but EXPAND as they center - the 3 Paravian Races with EACH a different fuction +..."

I was not able to find the second photo in bigger format that includes the back cover. This is the hardcover I own and the image continues onto the back side of the b..."

I don’t know what the raven symbolizes here but since it’s Traithe’s buddy I like to think it symbolizes the F7 looking over Arithon.

I never got any notifications of these posts either.....

I don’t know what the raven symbolizes here but since it’s Traithe’s buddy I like to think it symbolizes the F7 looking over Arithon.

I'll add it to the update. It does make sense.
But Janny was telling the Raven means a lot more. So maybe we should keep adding to that as we gate more clues. For now the only thing I can set up there is your idea.

Jieret's vision from Chapter 12. The entrance to Davien's sanctuary? Inside, in the dark, a ghost like appearance is seen. Is that Davien?
"

I don’t see a ghost inside the cave. But Davien is a good guess

So Janny just told us the ghost is a woman. Maybe not dead but discorporate and she didn't confirm that was Davien's hideout. Only Jieret's vision. Is there any such dis-corporate woman appearing in Peril's Gate?

Ravens - there are 3 of them on the last Peril's Gate cover. I wonder why? And then behind Arithon there is that sort of energy/flame circle/flow. Some magic battle is going on there?

And does anyone have any idea what that rune there means?

Bookmarking this for future review!

Id love to hear your thiughts on the images from Traitor’s Knot and forward through Destiny’s Conflict, Laura!! Im open to trying to determine some more of the symbolism.

:) thanks for your thoughts so far on these!