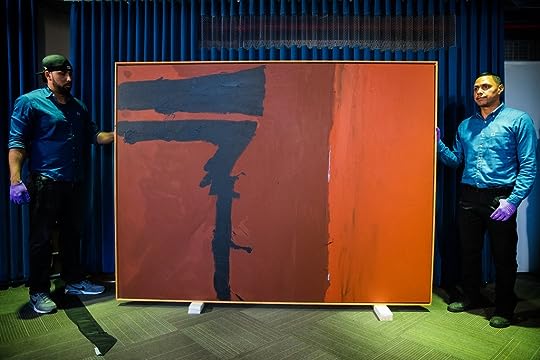 An untitled painting by Robert Motherwell that was returned to the foundation dedicated to preserving his work 40 years after the piece disappeared. (Credit2018 Dedalus Foundation/Licensed by VAGA, New York, NY; Benjamin Norman for The New York Times)

Missing for Four Decades, a Stolen Motherwell Painting Turns Up
by By Amanda Svachula
July 12, 2018

"Sometime in 1978 a huge piece by Robert Motherwell, the modernist painter, went missing from a Manhattan warehouse, one of dozens that were lost and thought stolen when Motherwell hired a moving company to help him switch his works from one storage site to another.

On Thursday, four decades after it had disappeared, the 1967 work, “Untitled,” now valued at $1 million, was returned to the foundation dedicated to preserving Motherwell’s legacy. It was found in a garage in upstate New York by the son of a man who used to work for the movers.

Officials said Thursday that the foundation then contacted the F.B.I., and investigators with its art crimes unit found that the man’s father, who died in the 1990s, had worked at the Manhattan-based moving company at the time the works went missing.

Mr. Berman said: “Today, dozens of works by Motherwell remain missing. We hope that they remain in the same condition as this piece, and that anyone encountering these pieces in the market brings them to the attention of law enforcement.”

The authorities said they do not believe the son knew the work had been stolen, but that it did seem that it had been purposely taken, not simply misplaced. Mr. Flam said there were marks on the back of the painting where warehouse labels had been ripped off.

Mr. Motherwell was a 20th-century American painter, printmaker and editor who played a major role in the Abstract Expressionist movement. He is well known as a member of the New York School, alongside artists including Willem de Kooning, Jackson Pollock, and Mark Rothko. He created abstract paintings and colorful collages made of sheet music, stamps, and tobacco labels, among other items."

It doesn't matter. It's not one of his better ones.

Geoffrey wrote: "It doesn't matter. It's not one of his better ones."