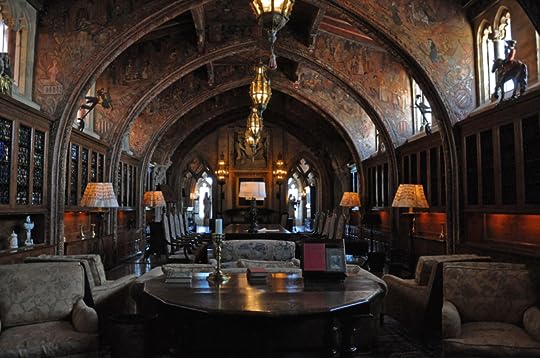 I had always thought it was rather silly for me to be attending an illusions class. Illusions wouldn’t work on me. Being blind and all. And though I could technically ‘see’ though my sensing, it wasn’t like actual seeing. I guess I could sense that if an illusion was being cast. It was a bit difficult to explain to those who didn’t have my disability. But I needed the credit. Plus being able to learn how to use certain illusions for my snakes later if I ever were to be in the Mundane world would be useful. They didn’t quite like being turned into actual hair, but I wouldn’t really have a choice if I didn’t want to be instantly found out and killed. Plus my purple freckles would be noticeable too. I would have to change quite a bit of my appearance to be safe if I were to ever travel across. But I didn’t see that to be a need anytime soon, so thankfully it wouldn’t be needed for some time, if at all.

My thoughts drifted as I entered the classroom. Usually I was the earliest to arrive, and the routine held up today. I sat down at one of the many seats set around the table, and set my bag down between the spaces. One of my snakes slithered around my arm. I smiled and gently let it as it moved on its own. Now all I had to do was wait for the others.

Drew walked tiredly into his Illusions class, his bag messily slouched over his shoulder as he slowly headed to a random seat. He wanted a seat close by the entrance just so he could rest his head sooner than later- and to not be noticed by all the other students that had already arrived. The classroom was pretty packed, and Drew was late as always, only having woken up a few minutes ago. His dormroom was relatively close by this classroom, so he took his sweet time getting there.
He placed his bag on the ground while getting to the nearest seat he could which was directly next to a rather mysterious girl. He plopped down on the seat, letting out a groan, and placed his head on to the table, closing his eyes to sleep. He didn't care about the snakes or anything, he was just too darn tired.

As more time passed, more students began to fill the room. Most people took their usual seats, slowing the rest. Soon the only empty one left was the one next to me. I wondered if anyone would fill it. Usually there was one or two people who didn’t attend due to sickness or some other reason. Of some people just didn’t like snakes. Or were possibly allergic. Though I suppose everyone was allergic to venom. But I didn’t allow my snakes to bite anyone unless they were an obvious threat to my person. Though eventually someone did sit next to me. Albeit a few minutes late. It was a random guy, I’d sensed him a few times in the class before, but he normally sat on the other side of the room. Though I guess beggars can’t be choosers when they’re late. He seemed rather tired, given the fact his bag was left half open and his didn’t even try to stay up for the beginning of class as the teacher started the lecture. I guess I could take notes for him. One of my snakes creeped down and gently pressed against his hair.