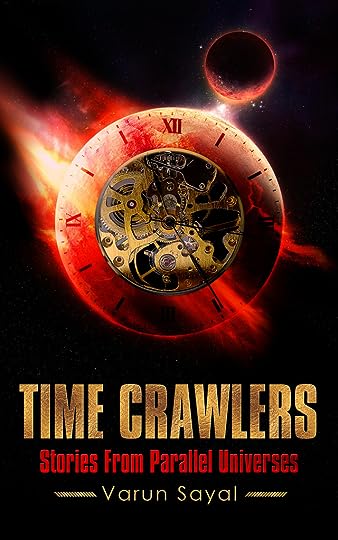 Look Inside the book: http://a.co/aZBGdA1

Quick look at the stories:

** Eclipse: **
No attacks, no blood-shed, yet there was an invasion and a conquest. Who are these shapeshifter aliens being hounded by an eclipse?

** Death by Crowd: **
The dark desires of the masses; darknet websites fueled by a crypto-currency. What lurks in the background – an advanced artificial intelligence?

** Genie: **
He rubbed a lamp alright, but what he got was the shock of his life. An entirely sci-fi take on the djinn myth.

** Time Crawlers: **
There are individuals who existing in multiple time periods at once, and there are those who know about them….

** The Cave: **
The fate of an advanced imperial race hangs in balance as a dark celestial entity meets a legendary protector.

** Nark-astra, The Hell Weapon: **
The weapons he possesses make him the destroyer of worlds, and he burns for revenge. A high-tech take on ancient Indian mythology.

Friends,
I am getting so much love and guidance from everywhere and I have faith in my stories. My book is rising up the rankings: