Mod
Name- Maven Whiterose
Age- 18
Court- Night Court
Gender- female
Species- Illyrian
Social status- norm
Relationship- available
Magic - she has wings and is also very good at fighting
Appearance-Maven has dark brown hair that curls at the end and falls to her waist. She has olive toned skin and bright green eyes. She has a sort of a heart shaped face with a small nose and freckles that dot her nose. She is about 5’6 and is very lean
Personality- she can be very intimidating when you first meet her and can be very cold. She will warm up to you eventually but you have to show her you won’t back down. She’s very nice but only to her friends. In battle she won’t turn her back on anybody that needs help. Her favorite weapons are her hands and lots of daggers
History- her mother was in a Illyrian camp when she met her father. Her mother was a cook in the camp and her father was a Illyrian warrior. Then had her and her brother before her father died in battle. Her mother became very depressed and died because she was no longer eating. Maven was left by herself to take care of her brother. They grew up in the camp and her brother trained to become an Illyrian warrior. Since she was a girl she was prohibited to train so she left camp and joined a group of women Illyrians and trained. They then started their own camp for women Illyrian
Family- Father (deceased) Mother (deceased) Brother- Aaron Whiterose (In Illyrian camp)
Other abilities: really good at singing

Mod
Name-Aaron Whiterose
Age-15
Gender- male
Court- night court
Species- Illyrian
Social status- norm
Relationship- available
Magic- Has wings and is very good at fighting
Appearance- Aaron has dark brown hair with streaks of gold. He is tall and has hazel eyes after his mother. He has no freckles and is also lean.
Personality- Aaron is very friendly and is happy to help new people fit in. He has a very happy go lucky personality. He favored weapons are Illyrian swords.
History- see Mavens
Family- mother and father( deceased) sister- Maven
Other abilities- is good at painting

At age 18, the young pooka fled Hybern and took refuge in the Court of Dreams. A commoner, he is a prankster, clever and quick to flatter against any highborn in return for their favor to shine upon him. Little is known about his past in Hybern, though it is whispered he was a pleasure slave before he learned to be a bard.

As a pooka, he has the ability to shapeshift into whatever animal pleases him, typically a pony, though goats, cats, dogs, ravens, foxes, and hares are also noteworthy. Whatever form a pooka takes, they always have staunch white or perfectly black fur with glowing golden eyes. Samhain knows how to play the panpipes and the harp. His name is pronounced sow-WEN or sow-EEN, though anglicized and bastardized, some pronounce it as it is spelt, sam-HAYN. His nickname therefore is Sow, not Sam. He gets upset when people mispronounce his name. Another variant of the name, which means "Summer's-End," is Shamhna, pronounced shav-nah. In the Gaelic Calendar, Samhain (the midpoint between the Autumn Equinox and the Winter Solstice, though typically rounded to the first of November, or in the modern day, attributed to Halloween) marks the end of the harvest season and the beginning of the 'darker half of the year.'

29 years old, female, pixie noblewoman of the court of summer, pansexual and polyamorous. As a pixie, she has gossamer wings which she can use to fly, the ability to make pixie-lights out of fairy fire to light her way or lead people astray - fairy fire is a phantom will-o'-wisp, it does not give off heat and does not burn. She can also create fairy, or in this case, pixie-dust, a multi-use magical powdered drug, which can be either an aphrodisiac, a sedative, a hallucinogen, or poison.

Like the rest of her race, Trixie is a wild and free spirit but is prone to addiction, obsession, hoarding, and stalking. Pretty ribbons and shiny things she is quick to pocket when no one is looking, and has a strong liking for ale and mead. Trixie is known of her love of a good laugh, and is easy to please. Rarely seen in a bad mood, she is slow to anger or tears, and is usually the one you seek out if you need cheering up. A gentle lady, she is said to never raise her voice or a hand to anyone.

A descendant from the infamous pixies Jack of the Lantern, Joan of the Wad, through their son, Will of the Wisp, (wad and wisp being a bundle of sticks or paper used for a torch), Trixie was of questionably noble birth, and while to some, pixies are nothing more than bothersome lesser fae, she was well respected in the summer court, despite the history involving her family and their attempt to gain control over Prythian via rebellion. The only daughter and last heir to her noble house, she is all that remains of the pixie 'royal' line. 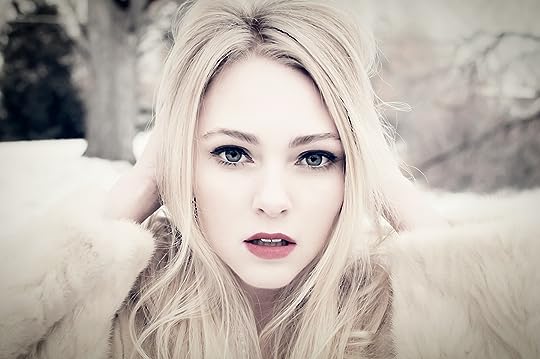 | she is very shy at first, and seems delicate and breakable. Really though, she has a fierce spirit and is very, very loyal and extremely protective. She doesn’t ever want to lose the few things she has again, so she is afraid of getting close to people. She usually keeps herself at a distance from others, leading them to believe she is shy or rude. But really, she’s just trying to protect herself. She can turn deadly in a moment, but usually is peaceful and completely filled with a sense of wonder.

| her magic is more complicated than most; she can produce snow like others, but it’s more difficult and taxing. The snow is usually worth it though; lasting for a long time and falling in great storms. A small snowstorm can pass her out. She can sometimes use her winter-like mind to entice people to do certain things without even speaking words. She can communicate with the winter animals in her court, but only barely.

| she is not currently in a relationship, and has never really been in a stable one.

| she has very blonde hair that falls to her shoulder blades. She usually keeps it down. Her complexion is pale, and in the sun she burns quite easily. Her eyes are strikingly grey, sometimes darker depending on her moods. She has very thick, long eyelashes that shade her eyes from most people. She is 5’4.
she usually wears grey or white simple dresses with fur lining, occasionally with a fur coat on top. She dislikes wearing heavy things, as it prevents her from running. She usually has on fluffy boots underneath her dress, flats, or bare feet. Her magic sometimes protects her from the cold, so on these days she can wear short sleeves.

| eira was born into a crisis. Her parents were fighting, and her father wanted to lose the baby. She was born prematurely, leading to her shortness, so her father didn’t have a chance to kill her before she started. Her mother ran, and left Eira on the winter court’s doorstep. She was raised by a family in the capital from infanthood. She never knew her real parents or where she came from, but she doesn’t let it bother her.

Relationship- only had one relationship that ended badly as his girlfriend cheated on him then left him in a forest after telling him.

appearance- Alex has dark black hair with matching eyes. He has a olive skin tone and is 5’10. His hair falls to just above his ears. He usually wears darker colored clothing with a mace at his side and combat boots

Personality- Alex looks dangerous at first but all the dark clothes is just a shell to protect him from letting anyone too close. He only lets friends see the real him and gives anyone else a cold shoulder. Once you get to know him though he is a real charmer but can shut down when someone gets too close. He enjoys getting people to laugh and have fun.

History- Alex was left outside an Illyrian camp when he was just 5 months old. He was raised as an Illyrian warrior and to fight only and protect others. He has been trying to find his birth parents since he was left. He has figured out that his mother was executed but he doesn’t know why and he doesn’t know anything about his father.

Family- mother ( unknown) father (unknown)
No siblings he knows of