Addicted to YA discussion

Mod
Hello Addicted to YA!

Our July guest for Addicted to YA’s author feature is Clark T. Carlton! Let’s have a warm Addicted to YA welcome for him here on this thread!!


Author Bio: Clark T. Carlton is a novelist, journalist, screen and television writer and an award winning playwright. He was born in the South, grew up in the East, went to school in the North and lives with his family in the West. As a child he spent hours observing ants and their wars and pondered their similarity to human societies. 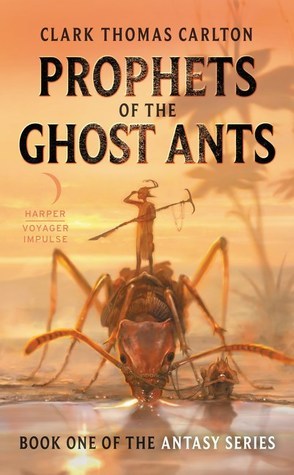 In a savage landscape where humans have evolved to the size of insects, they cannot hope to dominate. Ceaselessly, humans are stalked by night wasps, lair spiders, and marauder fleas. And just as sinister, men are still men. Corrupt elites ruthlessly enforce a rigid caste system. Duplicitous clergymen and power-mongering royalty wage pointless wars for their own glory. Fantasies of a better life and a better world serve only to torment those who dare to dream.

One so tormented is a half-breed slave named Anand, a dung-collector who has known nothing but squalor and abuse. Anand wants to lead his people against a genocidal army who fight atop fearsome, translucent Ghost Ants. But to his horror, Anand learns this merciless enemy is led by someone from his own family: a religious zealot bent on the conversion of all non-believers . . . or their extermination.

A mix of Pierce Brown's Red Rising, Katherine Addison’s The Goblin Emperor, and Phillip Pullman’s Golden Compass, this is a powerful new addition to the genre. 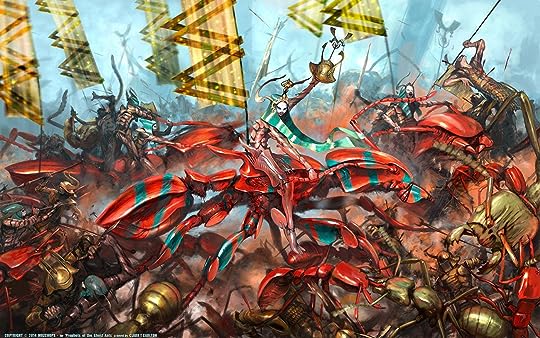 You can check out more amazing illustrations for the book here: https://www.facebook.com/pg/AntasySeries/photos/?tab=album&album_id=1189496024438230

Do you have a Guilty Pleasure book?
The Fountainhead -- a very entertaining book, but I am no fan of Ayn Rand or her philosophy.


What is your favorite movie and why?
The Wizard of Oz . Magical, compelling, frightening and incredibly beautiful.

What is your favorite genre to read? To write?
I like to read and write in all genres except mysteries, romance, crime and detective.

What is the best part about being an author?
I worked as a screenwriter for years in Hollywood, working on other people's projects. When you are an author, you get to write it your own way.

Give us an insight into your main character. What do they do that is so special?
He's a gifted boy and the son of two different tribes. In one of them he is the lowest of the low, a dung worker. In another, he is celebrated as the hero who will alter everyone's destiny. He's angry and hungry for justice and at the same time, infinitely compassionate and determined to change the world.

What was the hardest thing about writing your last book?
Rewriting it. The book was a successful indy book that was in development as a movie. Years later, it was acquired by Harper Collins. Along the way, it was rewritten then rewritten again. But the best writing is a result of rewriting.

Clark.’s Additional Comments: Book two of the Antasy series is out from Harper in March of 2019. My book is not for everyone and it is set in a brutal, complex world, but it definitely has it YA fans as well as science fiction and epic fantasy fans. Thank you for considering!


Catch up with Clark T. Carlton and find out more info at the Links below!
Amazon | Goodreads | Facebook

This month Clark and Addicted to YA are hosting a huge international giveaway for 5 paperback copies of Prophets of the Ghost Ants (Antasy #1) as well as 5 ebook copies!

Below are links to a Paperback giveaway, and a separate ebook giveaway for those who have a preference. You can enter both with the same participation comment. To enter all you have to do is be a member of our group and have participated in this author feature post, here is the link to:

How do you participate?

My favorite movie is The Wizard of Oz too! Dorothy was my number one childhood heroine. 😀

Mod
Slytherpuff wrote: "How do you participate?"

Good Question! Participatory comments/questions for the author is how you participate. In each giveaway, there's a section to drop a link to your comment.

The easiest way for us mods to verify the comment as a genuine Addicted to YA member is if the link submitted to the giveaway is a direct link to your comment, but a link to this thread and your Goodreads Username so we know which one is you is also acceptable!

You can find your direct comment link by right clicking on the time stamp on your comment. For example, I would click on "July 2nd, 2018 8AM" next to my original comment to send that to someone!

Sounds like it would be perfect for a SyFy channel movie. Best wishes with the book, Clark!

Teri wrote: "Sounds like it would be perfect for a SyFy channel movie. Best wishes with the book, Clark!"

Thanks Teri! We're hoping for HBO or Showtime!

It sounds like it will make a great movie, or maybe even mini series? I am looking forward to reading this one, and finding out how our societies might relate to insects!

Chase wrote: "It sounds like it will make a great movie, or maybe even mini series? I am looking forward to reading this one, and finding out how our societies might relate to insects!"

Chase, we hope so! We got it close to being a movie trilogy but the discussion now is more of a cable series.

A new twist in the world of SyFy. Insects have been creepy, yet so intriguing. There are so many insects with many different characteristics. I’m looking forward to reading something so different from most of the YA books I have been reading. Bradbury has been one of my favourite authors. His stories always leave me thinking long after I’ve read them. I’m sure there will be many strong messages in your books as well. Write on!

Donna wrote: "A new twist in the world of SyFy. Insects have been creepy, yet so intriguing. There are so many insects with many different characteristics. I’m looking forward to reading something so different f..."

Donna, I feel that way about insects too. I think they are strangely beautiful but can't really like them -- they're little automatons who aren't warm and furry. But they always get my attention.

This book sounds like it'll be a good read! (LOL pun intended) I've enjoyed a slightly similar book on a dystopian future involving ants. Mort(e) by Robert Repino. I love the idea of insects being a central part of the story. I too spent long hours as a kid looking at ants and how they live and communicate. It's fascinating. Looking forward to reading your book!

Jamie, thank you! I will check out the Repino book. Sounds very interesting.

A lot of the authors that inspired you are my favs too!

Also your book sounds super interesting!
Being interested in Zoology once , this has definitely piqued my interest!

This reminds me of a book called The Metamorphosis but this is more intriguing to me! I can't wait to read this, and it definitely sounds interesting! I'm especially looking forward to the "brutal, complex" world.!

this is more or less the first time i have heard of such a plot! the first thing that came to mind was antman. (haha, i’m a marvel geek) anyway, i’m already intrigued and excited to read this!
(and from reading the blurb, i think it’ll make a good film or netflix series!)

"ANTASY" I Love it. Such a clever 'hook.'
The illustration shown above looks amazing

Interesting idea. There was a big hit in Germany in the 90s about killer ants Ameisen, Die (that should be Die Ameisen), but more along the premise of Du Maurier's The Birds or some 1950s 'mutant monster' flick; no idea if it's ever been translated into English (on the offchance your German's not up to it...). Good luck with the book, and the screen adaptation.