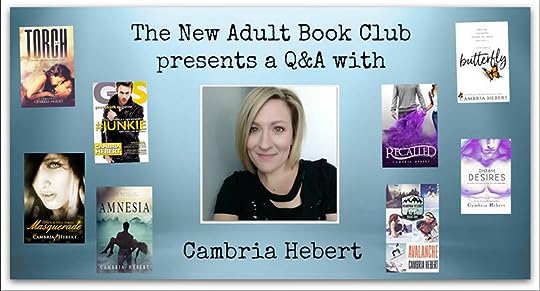 This week we have the incredible Bestselling author Cambria Hebert with us. Cambria is the author of books such as Tempt, Masquerade, #Nerd, Torch, #Junkie and much more. !


Leave your question/s for Cambria below and I will send her the questions next week and post her responses on the bottom of this thread!

What are you working on now?

who are your favorite authors, who do not write the same genre as you?

Were you more studious in school or more about having fun and goofing off?

Do you base your characters and events that happen in your books from real life?

What's the most difficult part of the writing process?

What was your hardest scene to write and from which book?

How did you come up with Braeden's character (Sorry if I spelled his name wrong!)

What story was your favorite to write?

What made you decide to give Romeo a bright green Hellcat?

what do you do for relaxation and fun?

Who has been your favorite character write so far?

Are there going to be more gearshark books?

what was the last 5 star book you read?

Nicole asked, What are you working on now?
Hi Nicole! I’m working on Frostbite, BearPaw Resort #3 😊 After that I have a few books lined up I would like to write.

Emily asked, Who are your favorite authors, who do not write the same genre as you?
Hi Emily! I don’t really know about ones who don’t write in the same genre as me, because I’ve written in a lot of different genres (within romance) and I usually don’t read books that don’t have romance, lol. Some of my favorites are Jennifer Armentrout, Linda Howard, Tijan and Cameo Renae.

Caitlin asked, Were you more studious in school or more about having fun and goofing off?
Hi Caitlin! I had good grades in school, but I don’t really think I was too studious, haha!! I wasn’t really a class clown either, I was sort of the one who sat there with her head in the clouds and daydreamed while the teachers went on and on. School definitely wasn’t one of my favorite things.

S. Shade asked, Do you base your characters and events that happen in your books from real life?
Hey there, S. Shade! I don’t usually base my characters off people in real life that I know… but some have inspired me to write certain characters. The one character I based off someone the most is Violet from Butterfly. I actually based her off me… lol. I don’t necessarily like to base characters off someone because I’m not in their head and I don’t want to say oh such and such is based off this person because in their mind they might not be anything like the way I see them. You know what I mean? I WILL say though that some of my characters do and say things my husband does, or a few have similar characteristics or looks of people I know. I also based Romeo (from the hashtag series) off Paul Walker, who I obviously never met but I loved.

Carolina, What's the most difficult part of the writing process?
Hi Carolina!! There are a lot of difficult things about the writing process… hahaha! I think the most difficult thing changes from time to time based on what I’m doing, lol. Does that make me moody? Ha! I think overall one of the most difficult things is writing itself. Sometimes its hard to get out of my own life and into the lives of the characters I’m writing. It’s sort of like straddling two realities at the same time. And a lot of the time I am convinces that whatever I’m writing is boring, so there will always be this voice in the back of my head telling myself to stop being so boring. I just push on and hope that I’m being paranoid. Writing, I think is something you have be disciplined about. If you don’t put your butt in the chair and write nothing gets done. Its hard sometimes to just sit down and get started.

Karla, What was your hardest scene to write and from which book?
Hey Karla! Asking the tough stuff! There have been a lot of tough scenes for me to write but the one that sticks in my head the most is Zach’s point of view in #Heart. That guy gave me a stomach ache. He was hard to write because he was such a bad character, but at the same time he was human and I wanted to portray that and also show how he became the way he did. Also, Arrow’s backstory (#Blur) was difficult to write. It was dark and upsetting for me, but I also felt it was important to cover because it showed everything he was trying to overcome.

Christa asked, How did you come up with Braeden's character (Sorry if I spelled his name wrong!)
Hi Christa! You spelled it right! Go you! Hmmm, I think B just showed up in my head one day and said “Here I am, write me!” and I did. Ha! He is a fun character and I loved giving Romeo someone to banter with and to have that bond with. I love sarcastic guys and B is totally that.

Ashley asked, What story was your favorite to write?
#Junkie. 😊 Trent and Drew totally stole my heart (which actually surprised me, lol) and it will take a lot to unseat them as kings of my heart.

Kara asked, What made you decide to give Romeo a bright green Hellcat?
It was flashy, noticeable and screamed Romeo to me. I wanted something that everyone would know and recognize as his. Also, a little unknown fact: green was a school color of Romeo’s high school football team.

Michelle asked, What do you do for relaxation and fun?
Hi Michelle! I like to watch movies. Movie nights are my favorite.

Court asked, Who has been your favorite character to write so far?
Hey Court! Trent. Trent is my favorite. He totally snuck up on me like that. He’s in a lot of my books but he really grabbed me in #Junkie and he hasn’t let go.

Tiffanee asked, Are there going to be more gearshark books?
Hey Tiffanee! More GearShark books? Not sure, guess time will tell!

Tiffany asked, what was the last 5 star book you read?
Hi Tiffany! The last five star book I read… hmmm. That’s hard. I actually don’t get to read as much as I would like because I don’t like to influence what I’m writing. Probably Ryan’s Bed by Tijan, Guarding Eden by Cameo Renae and I also recently read Castaways by Tara Brown and I enjoyed that one too!


Thanks so much everyone for taking the time to leave me a question!!
And thank you for reading!