"Realism was an artistic movement that began in France in the 1850s, after the 1848 Revolution.[1] Realists rejected Romanticism, which had dominated French literature and art since the late 18th century. Realism revolted against the exotic subject matter and exaggerated emotionalism and drama of the Romantic movement. Instead it sought to portray real and typical contemporary people and situations with truth and accuracy, and not avoiding unpleasant or sordid aspects of life. Realist works depicted people of all classes in situations that arise in ordinary life, and often reflected the changes wrought by the Industrial and Commercial Revolutions. The popularity of such 'realistic' works grew with the introduction of photography — a new visual source that created a desire for people to produce representations which look objectively real."

Was looking aound the group but didn't find a word about realism, even that there is so much great realistic artists nowadays, and there was alot of them before. Was just interested what people actually think about it. 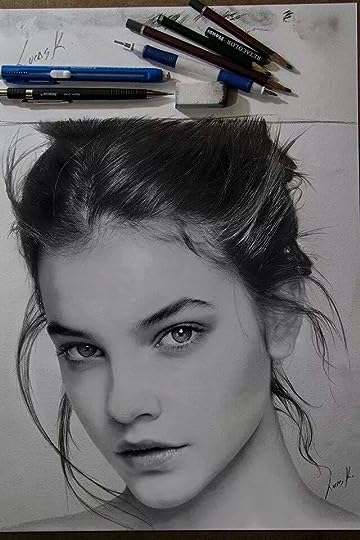 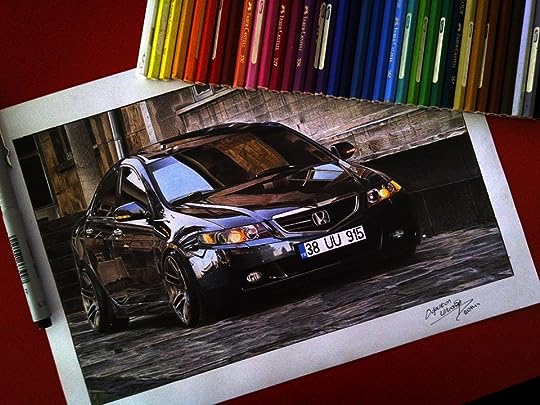 Thank you so much, Locovilly, for introducing this. I know very little about the subject and I'm interested in learning more. I think the Realistic view in art is incredible. For me, it demonstrates talent.

I'm not an artist myself in the least, so for someone to be able to produce works such as those you displayed above, shows his or her ability to recreate the subject in its true form.

Some may say that the works of Realism don't demonstrate creative ingenuity. I look forward to thoughts of others members in addition to yours. 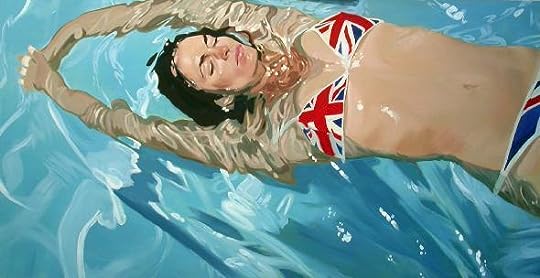 I think water and glass would be two of the most difficult subjects to represent. Also facial features. But for me, it's all difficult! 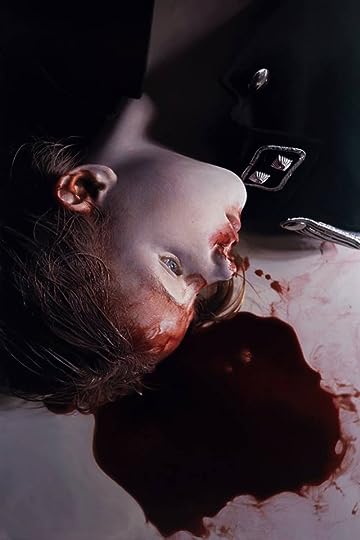 Water and glass are not difficult at all. Forget what you are painting and everything you know about water and glass. Just duplicate all the funny little shapes you see.


""
You should check his gallery, you will find there more disturbing paintings :) 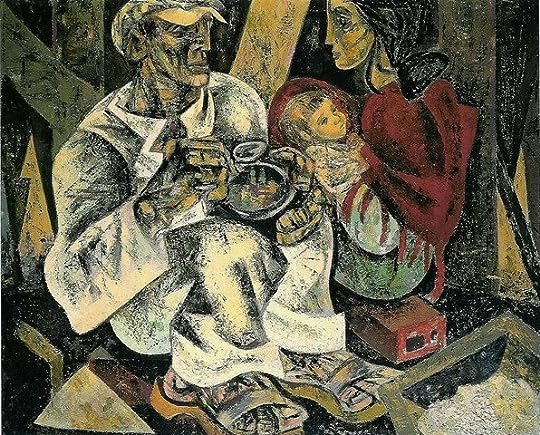 O Almoço do Trolha - Júlio Pomar, 1950 In English, The lunch of the Mason

Heather wrote: "Thank you so much, Locovilly, for introducing this. I know very little about the subject and I'm interested in learning more. I think the Realistic view in art is incredible. For me, it demonstrate..."

I agree with you here, most of people thinks that realism is not more than copying, but hey take a pencil and try to do the same. For me realism is one of the most difficult styles in art. It is a copying in some way but artist still have his own vision, and just imagine how hard it is to recreate emotions and face expression! I know alot young and very talented artists who not ony paints and draws but also making tattoos in realism, which is even more harder.
For example Dmitriy Samohin out of Ukraine : 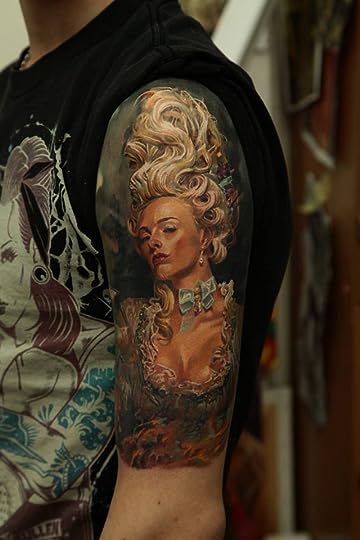 Let's not forget Courbet, who essentially defined the original idea of Realism. "Painting is the representation of visible forms. The essence of realism is its negation of the ideal."
--Gustave Courbet 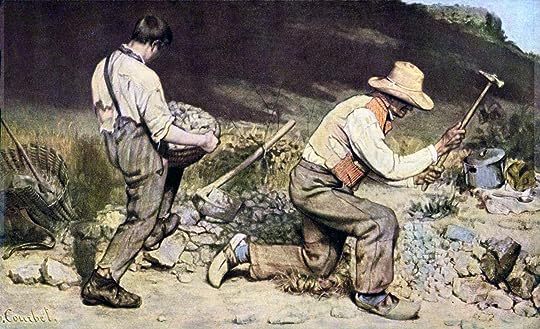 Unlike common usage, Renaissance painting is not "realistic" in that it is idealizing, and imaginative. Courbet was not devoid of imagination, but he wanted to source everything directly from nature. He'd never paint an angel, he said if you want me to paint one, show me one first.

The roots of many of Courbet's ideas come from the traditions of Dutch realism, which in turn got some of its optical emphasis from the Northern Renaissance. 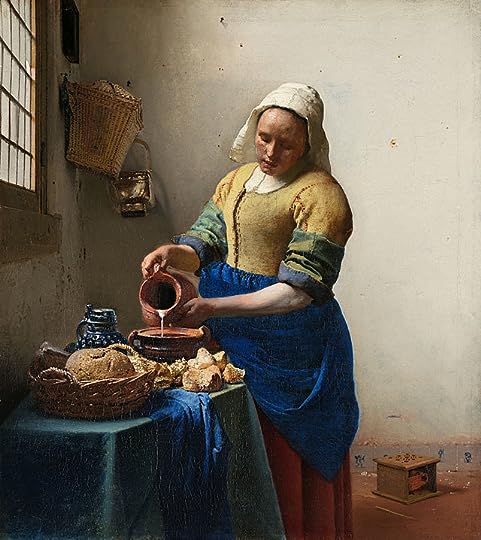 I understand realism to signify the depiction of everyday life without sentimentality. People at the most menial tasks are portrayed without a shred of romantic feeling or pity.

About some art words....

Geoffrey, I think you are more accurate in your use of "realism", in the technical sense. In art and literary criticism, and art history, it means an immediate depiction without stylization or sentiment. Naturalism is closely related but includes underlying cause, which realism ignores.

For example, in that definition, Ingres and Delacroix would NOT be considered realists.

Poly's use of the term is consistent with common usage. That's not how art history usually uses the term. Maybe we should distinguish between "big R" Realism, and "small R" realism. :)

The street term "realism" would correspond to what is more technically called "representationalism". That would encompass much of classical sculpture, renaissance, mannerist, romantic, classicist, realist, academic, and photorealist art.

In common usage, even impressionism is considered realist, but that is very much a stretch, as the idea is to create a visual equivalent of impressions, rather than literal accuracy. A movie taken of Monet painting shows him with his easel actually at 90 degrees from the scene he is painting, he paints by taking quick glances over his shoulder and then paints his impression. It is hard to imagine Courbet doing that.

Continuing on the spectrum of getting less and less realistic is semi abstract, abstract, and finally, non-objective, work. Non-objective work is deliberately constructed to avoid any hint of representation of objects, whereas abstract work may or may not suggest images or subject matter. For example, much of Miro's work is abstract, but not non-objective, whereas Mondrian's later work is classified as non-objective.

While we are on the subject, there's the term figurative. That is a term that encompasses any depiction of the human form, from representational to abstract.

Wow, Ed, you have just educated me in many areas. I've never heard of 'non-objective' or 'representationalism'. And your descriptions and examples are very well presented.

One of the things I remember well, is an English class in high school, where everybody was asked about a book and why they liked it. Everybody said that, among other things, that their chosen work was "realistic". The teacher straightened us out on that score! A work can carry emotional conviction, or be believable without being literally realistic!

I wanted to delve into this one again. We have thus far learned a lot about Realism from the previous posts, what it is, what it isn't (I have deleted some comments that were derogatory toward other member's views)

But, What is Realism to you?

I copied Geoffrey's definition or understanding of realism here, and would like to hear some other opinions, thoughts, understandings from you!

Geoffrey wrote: "I understand realism to signify the depiction of everyday life without sentimentality. People at the most menial tasks are portrayed without a shred of romantic feeling or pity."

I hope we can have some comments, maybe a bit of (tactful and positive) debate, and learn together what other members think of this movement. Go!

1 : concern for fact or reality and rejection of the impractical and visionary
2 a : a doctrine that universals exist outside the mind; specifically : the conception that an abstract term names an independent and unitary reality
b : a theory that objects of sense perception or cognition exist independently of the mind — compare nominalism
3 : the theory or practice of fidelity in art and literature to nature or to real life and to accurate representation without idealization

In a short statement: The opposite of Surrealism!

: the principles, ideals, or practice of producing fantastic or incongruous imagery or effects in art, literature, film, or theater by means of unnatural or irrational juxtapositions and combinations

Heather wrote: "I wanted to delve into this one again. We have thus far learned a lot about Realism from the previous posts, what it is, what it isn't (I have deleted some comments that were derogatory toward othe..."
In my experience sentimentality is a very slippery word. Most people of a critical nature use the word to mean something negative: like maudlin. I feel that sentimental also has an aristocratic sense: something nobel, refined, and sophisticated: having feelings appropriate to the situation.