28 views
Who is your favorite sidekick?

Mod
Who is your favorite sidekick from a comic book or graphic novel? Why?

Mod
I love Rocket Raccoon. He is a visually cool character, I love his banter (when written well), and he is great in a fight. It is always interesting seeing how characters respond to him.

"Hands down, Robin."
Isn't that what Batgirl used to say?

James wrote: ""Hands down, Robin."
Isn't that what Batgirl used to say?"

See this is where GR really needs a like button.

Mod
Wing Kee wrote: "Yes there needs to be a like button. :)"

Honestly, this is such an obvious feature!

Personally Tim cause I grew up with him.

Mod
Wing Kee wrote: "Personally Tim cause I grew up with him."

I really like Damien in Super Sons, Volume 1: When I Grow Up. Have you read that series at all?

My favourite, Dane McGowan (Jack Frost) from The Invisibles. Is he a sidekick? Well he was enlisted by King Mob to the Invisibles in a very Batman and Robin manner, and I'd say he's he's very much the prototype for Damien as Robin, he's mouthy and opinionated, a pain in the arse and openly rebels against his mentor.
I read The Invisibles at a very formative time as a teenager, and I could relate very well to Dane growing up in post Thatcher Britain, Volume 1 of The Invisibles, and Kill Your Boyfriend, were central texts of my teenage experience of the 90's, and even to this day I'm just desperate to discuss these two Grant Morrison works at any opportunity.

I have, top bad they cancelled it...and we only so far have news of. 6 issue miniseries.

it has to be Tim Drake Robin.

there are a lot of cool ones (Including like 6 other Robins) but it has go to be Tim.

It really depends of what Batman you like. Dick would be a more emotionally and hopeful Bats, Jason is just an angry Bats, Tim would be the detective but could also be emotionally distance, Damien the most skilled but also has a dark side.

I grew up believing Dick would be the best one.

Mod
I'm gonna play to my expected answer and go with an X-Men Character: Wolverine's sidekick from the All-New Wolverine series, Honey Badger. 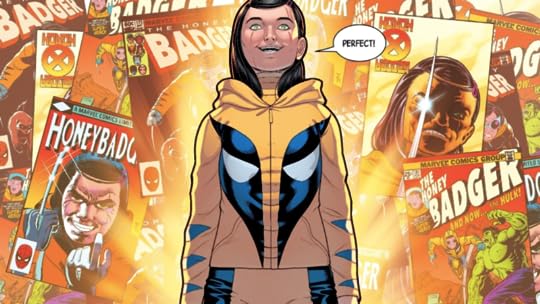 Dude. YES. X-23 is not who Laura is. She is WOLVERINE. She is Laura Kinny. She is so much more than some designation on paper.

As for Gabby, it'll be interesting to see how she plays out in the new series. I see her continuing to be the comedic foil, but she has to grow in some capacity, right?

I need a Gabby and Deadpool (And Jonatha..."

Despite not being a big Deadpool as of late, I would so read this--especially if Tom Taylor wrote it. Even a one-shot would be great.

Danny, you sweet, sweet man. YOU ACT AS IF I HAVEN'T CRIED ABOUT THIS BOOK BEING DONE 100 TIMES OVER.

Hit-Girl (based on Kick-Ass being the title hero even though he is basically her sidekick) and Barbara "Batgirl/Oracle" Gordon. They are both great on their own but provide crucial support to their partner when needed.

Mod
I just finished reading Kick-Ass! I'm not generally into super violent books, but I did love Hit-Girl's snarky commentary and her complete self-confidence. I already knew how violent Kick-Ass was from the movie, and I'm glad I knew that going in. It let me enjoy the characters much more.