The chapter opens with the Bingleys and Darcy discussing discussing Lizzie using their carriage to return home later that day. They discuss the scandal of Lizzie walking so far alone and appearing to be such a mess on arrival. Miss Bingley asks if this image has ruined Darcy's admiration of her “fine eyes” , to which he replies “not at all, they were brightened by the exercise.”.

Mrs Bingley has affection for Jane but feels that due to her family's “low connections” and her mother and father, that she is not good enough for her son. Mr Bingley defends Jane, saying that even if their entire family filled Cheapside, it “would not make them one jot less agreeeable” (awwwwwh)

Later on, when Jane is asleep, Elizabeth goes downstairs to find them all playing cards. Lizzie picks up a book instead and sits alone in the room away from them. They wind up having their first sparring match over the discussion of how many talents an “ideal woman” should have. After an extensive list about languages and posture and crafting and music, Darcy adds

I wonder if he threw that last bit in because she was reading and they had been discussing their family libraries?

Elizabeth decides Jane is too sick to leave her just yet, the Bingleys send for the family apothecary again and Lizzie remains at Netherfield Park. 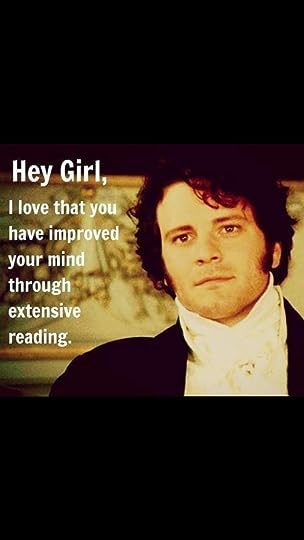 And so begins my desire to slap both Bingley's sisters. I love Darcy's line regarding Elizabeth's eyes because it shows he has a bit of a playful side.

I can't decide if he is being playful or serious when he answers her about the comment he made all the time bit either way it is cute XD. Caroline Bingley is awful!

I was I little behind on my reading, but I'm catching up :)
Oh, gods! Like we really need another reason to love Mr. Darcy... He likes reading. He likes girls who read :D
I forgive you Mr Darcy for calling Lizzie 'just tolerable'. She IS beautiful enough to tempt you HA!
I hate Miss Bingley too! She puts herself on a pedestal, but I think she is actually very rude!
(Oh, wait... I remember something else about her and Darcy. I need to comment on another chapter!)

: D no worries Lore- that's why this read-a-long is going all month, so that nobody feels rushed doing it!

I love seeing Darcy grow and change his opinion of Lizzie- and basically regret ever being rude to her in the first place.

Caroline Bingley is an annoying pain in the backside.