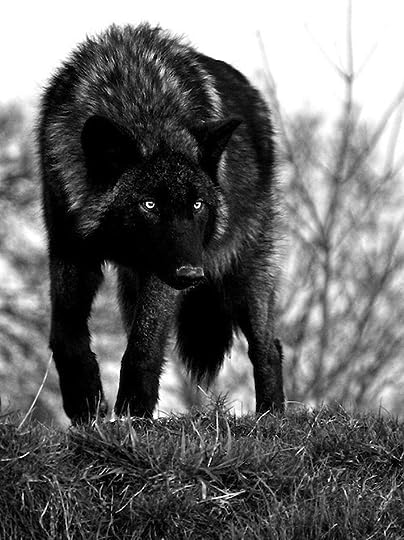 |• She has black fur with silver flecks •|
|• She has silvery white eyes •|
|• She has a lean, muscular build. She is stronger than she looks, but still has an advantage in battle with her agility •|

||•| Personality |•||
Ciar is a ruthless leader. She is cruel and will not hesitate to rip out her enemies throat. However, if she doesn't find that you're worth her time she will spare you. Ciar despite her cruel behavior is also a fair and wise leader. She has an ever changing personality and it is very difficult to know when she will either attack you or smile at you.

||•| History |•||
Ciar was born and raised with her sister, Scythe. She and her sister together destroyed their first pack, though according to Scythe, Ciar wasn't much of help. Once their pack was completely destroyed Ciar showed up at ShadowWalkers. They were originally were going to use her as a sacrifice, but she defended herself refusing to allow them to kill her. She killed two wolves that day, the beta and a warrior, both of whom where much bigger and stronger than she was. The Alpha at the time was impressed and spared her life grudgingly. By the time Ciar was 2 1/2, she had become the Beta. Though the Alpha had grown weak and she was aware that half of the pack were going to betray both her and him. Refusing to give up her dominance, she challenged the Alpha and won. She banished him from the pack and has been Alpha since then. She and her sister have a good (meaning they aren't at each other's throats all the time) relationship with each other and their packs are at a mutual agreement at the moment.

||•| Other |•||
Ciar leads with fear mostly, but a lot of her pack mates respect her and her decisions.