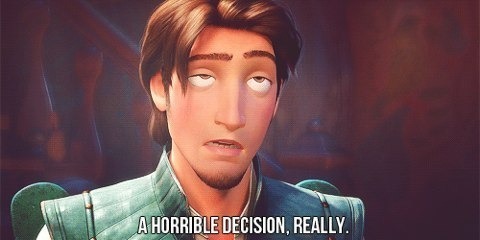 At first Flynn comes off as cocky, arrogant and a little bit self-centered. He is overly concerned about money, wealth and the tiara he wishes to regain from Rapunzel. However, when one gets to know him, he is sensitive, laid back and good-hearted. As an experienced thief, he is skilled in escaping the authorities, hiding out and stealing right from under people's noses. Thus, he is agile, strong and quick-witted. Flynn's talents also include fencing, horseback riding, scaling and maneuvering over high walls and towers and "superhuman good looks", which unfortunately have no effect on Rapunzel. For the first part of the film, he is solely focused on thieving and increasing his personal bank, aspiring to bask in his wealth one day on his own private island. However, as he begins to fall in love with Rapunzel, he transforms into a more compassionate, chivalrous and trustworthy person, and changes his priorities. He even willingly gives the tiara to the Stabbington Brothers to keep them off their back, (although he never quite loses his initial cockiness and tendency to cause mischief.) Flynn loses sight of the importance of becoming rich as he fights to be with Rapunzel. By the end of the film, Flynn's love for her has grown to the point where he is willing to die so that she can be free. In the ending narration, he claims to have given up thieving.

Okay what should we rp about with tangled?

Maybe since the storyline of the movie is already written out and stuff. Why don't we write about their struggles after the fact?

Sure, why don't yu go first?

Repunzel was sleeping beside her husband feeling very happy that they were finally getting some peace and quiet. She smiled waking up as early as she usually did. She let her feet touch the soft purple carpet and walked a little ways to the wardrobe. She quickly got dressed and brushed her now short brown hair."Eugene." She whispered to him attempting to wake him up. "It's time to go downstairs for breakfast."She added.

"Just a few mintues," He muttered under his breath. He had disheveled brown hair from sleep. He rolled over onto his side tired still and put the pillow over his head. He didn't need Pascal putting his tongue in his ear it was weird and disgusting the last four or three times that it had happened. His adventure to save Repunzel had been morbid at a certain point, but it was a happy ending. She met her real parents which didn't stab him like her other fake mother. Getting stabbed had been bad, but the worse was never to see Repunzel or have to look for when she was kidnapped by her fake mother. Without a real thought, he had cut her hair making it a short brown. The fake mother died and he had been healed. After a long time she kept asking if he would marry her, finally he said yes. Well, actually he had asked her to marry him and so they did.

"Okay honey but don't be long.I have news that I need to tell you and my parents together." She said and kissed him gently on his forehead. She walked out of the room leaving Pascal in the room with Flynn. The little lizard kept nudging him knowing that he didn't like when he tongued him in the ear. Pascal also knew that something different was going on with Repuzel.

"Okay," He yawned as he laid there in the bed. He kept feeling a small push from his backside. "Pascal!" He groaned trying to push the lizard away and got back into a comfortable sleeping position. The horse, Maximus walked in through the castle. He was a strange horse and didn't like to listen very well. He pushed Eugene off the bed, "Hey, how did this horse come? I don't want to know," He sighed getting up.

Rapunzel sat down in the dinning room waiting patiently as servants came out and set the table and put food at the table. This is going to be very gut warming. She thought to herself feeling very excited just knowing that she was expecting a baby was the most wonderful thing in the world.