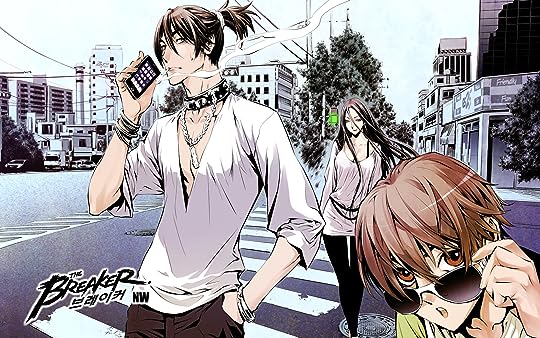 Is there an anime version?
No

The story follows Shiwoon Yi, a timid high school student who becomes the disciple to Chunwoo Han, a martial artist who is an enemy to the secret martial arts society known as the Murim.

I've read this manhwa over 3 times, maybe more. It's just so addicting. I have gotten use to manhwas with storyline revolving the Murim or something of the sorts.

The Breaker starts of like many other mangas/ manhwas - "A student picked on and the arrival of a new mysterious teacher. Student witnesses teacher dominate a fight with ease and pleads/ blackmails said teacher to train him. The secret martial arts world is looking for the mysterious teacher and his student is now at risk." A cliché in my books but I still love it. The first chapters are a bit slow, but it gives you a good background on Shiwon and his interactions with his entourage. As the story progresses, you start to understand what is going on, who Chunwoo is, and the effect he has on the world due to past actions.

The storyline evolves as the chapters progress and the characters evolve has it goes. The artwork improves with time, so do the fight scenes (the are pretty great).

The end made me sad and was left with huge open doors, but the author had already planned for a sequel (I read it and now am waiting for the final arc season 3 of this series). But its not as bad as it sounds. I do recommend this to friends, and I only hope that there would be an anime based on it.

Do I recommend it: