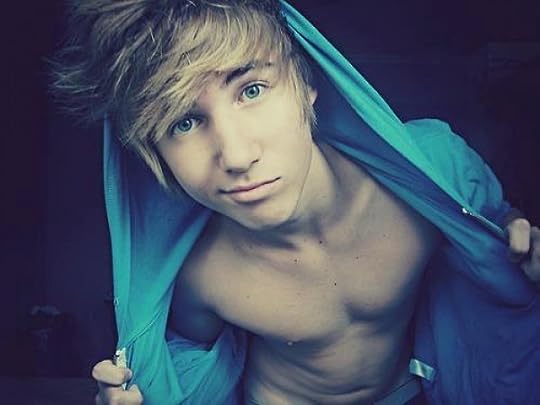 Written Description:
Hair Color: Dirty Blonde
Eye Color: Pale Blue
Height: 5'5
Weight: 134 lbs
SkinTone: White
Distinguishable Marking
Birthmark on the back of his neck, and has a scar on his chin, from a bus accident the Erudite covered up, tattoos up both sides of his body.

Personality: Jason is a very smart 18 year old, with archery skills that are the bomb (guns too) and has a strong spirit. Jason is athletic, stays focused. Talking is his main pass-time though, he likes being able to go to a different world for a while and forget about his life. He is a well balanced, talented, Dauntless member, but he also likes excitement and thrills. He is a very nice boy, always kind, always a bit goofy, but he is very charming and romantic when he is on a date. He craves excitement, in the faction Dauntless.


History:
Jason's mom died in a classified bus accident, he doesn't know what really happened, but the driver said they blew a gasket. But Jason knew it wasn't any gasket... The way the "BOOM" surrounded the bus, and the way the bus stopped with no warning, all at once, which is hardly possible, and shot everyone up in the air and lurching forward. His mother hit her head on the top of the bus, landed (gut) on the back of a metal chair, and died from internal bleeding that night. He was lucky and hit his head on the chair in front of him, and blacked out. After a while he started to regain his old self, and when he was back to a smiling teenage boy, numerous girls asked him for a date, the few he said "Yes" to, he accidentally blew it by staying quiet, because he didn't have any interest in the girls anyways. Despite his failure to have a successful relationship, he wished to find his true love, just like in the stories he read as a child.

- Chocolate
- People gawking at him
- Jeanine

-Mentioning of bus accident.
-Mentioning his helping Jeanine
-The Chasm

Weapon of Choice: Bow and arrow, better usage of heights.

Faction they are in: Dauntless.

Faction They chose at ceremony: Dauntless.

Other: Jason prefers to be called Jay, or J.T. if you don't know him well, but prefers Jay. Hates when people refer to him as "The Leader of Our Future". Becomes very intrigued if a girl talks about true love, or would be if any girl had ever talked about it.

The picture works if you tap the arrow I the top right corner of the screen twice.

Okay, he will be older

No prob. Tell me once that's done

Edit the personality because it still says 16

It does? Ok sorry!

Again not a prob

Im looking for a boyfriend for my person Bella Foix. Do you think maybe we could get them together? I think Jason would go pretty well with Bella.

Bella is in Dauntless. He profile it's in the initiate's.

I mean, her profile. Ugh I'm on the app.

Wait,doesn't he have to go to the Full Members folder then if he is 18?

I signed up for initiates too late, so I had to edit the stuff aswell, so it's under initiates, and he had to be over 16...

I'll tell you when Bella is free. Next time maybe.