Are they good at their job?:

Personality: outgoing, bold yet cautious, and prefers to be alone.

History: lived in a rough neighborhood and learned to defend himself. An agent was in the neighborhood one day and watched him. He and two other agents came and offered him a chance to get out of there and help save lives, so he took the offer and went with them.

Likes: when he completes a mission, when he gets assigned to a case by himself, sunsets.

Dislikes: not finding the bad guy or girl, when he doesn't get a mission.

Are they good at their job?: Very good

Personality: Griffin is outgoing and very observant, even if people don’t return the characteristic. He is goofy and spontaneous, and notices things that others tend not to. He sometimes gets focused on small things. He has a kind side and is loyal and steady. When he falls in love, he falls deeply and hardly ever comes out without scars. It takes him a while to learn to trust you, however innocent he seems. He’s clumsy and can hurt himself easily, despite his training.

History: Griffin was born in a neighborhood full of kids in Britain, including his crush. He watched her day after day, making sure she got home safe, until she went missing, and he freaked out and ran away looking for her (he was 14). He never found her, of course, but while he was living on his own he learned to steal and spy. There was never anything at home for him anyways. An agent found him in the woods and brought him in, then moved him to the institution in America. 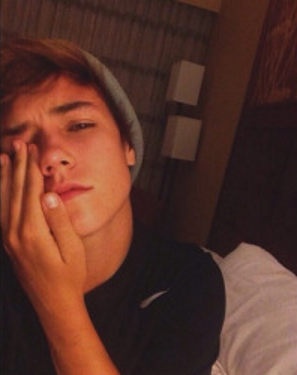 Dislikes: being alone for extended periods of time, the dark, crowns for some reason, anything sharp

Mod
Both are approved

Personality: Sam is very self-conscious and cares what other people think of him. At least, he used to. He is just kind of a robot, uncaring and separated from reality. He acts like he doesn’t feel anything, but inside he yearns for any kind of physical or mental support or contact. He notices the little things and is a bit of a dreamer, and will sacrifice anything for the people who make him feel worth it. Namely, no one.

History: Sam lived in an unstable situation at home, where his mom was a prostitute for money (they were very poor) and his dad was constantly drunk. Everyone would make fun of him for it, and his brother would hurt him for not helping them out, even when he was only eight. He always hated his brother and dad, but he loved his mom more than anything. He knew that she was only doing it because she had to, and she was giving herself away for them. He hated that she had to do it, but admired her bravery and selflessness. Then, one night, she didn’t come home, and Sam’s dad got angry and drank all night long. She wasn’t back by the morning, and so he started to prey on Sam, calling him nasty things and hitting him. Sam just ignored that, already upset enough over his mother, but the phrase that broke him was ‘your mother would have been ashamed’, straight from his father’s mouth. He ran away and was taken in by foster care, and he would train and practice and punch and kick and hit to get out his feelings. Eventually he was found by an agent and taken in, but he has never been the same.

Likes: he actually loves cats, and dark rooms, and thinking, and warm baths

Mod
((I'm struggling right now. I have no idea what to make him look like..))

Personality:Aryan seems very quiet, but that's only because he's focusing on absorbing all the information around him. He is very slow to trust but if you get to a point with him, he will begin to trust you. Slowly, but it's there. Aryan can be quite stubborn at times even without meaning to. He thinks he has a strong idea of who he is, but in reality he has no idea who he is inside.

History:Aryan doesn't remember his parents. He doesn't remember his first 5 foster parents either. He's been told it's his thirteenth set of foster parents but he really can't be sure. He would have stayed with one family if he wasn't such a 'difficult child'. As he's grown older, he's adapted more and spent more and more time with each family. However, when he was 17, he decided to live on his own and moved out happily into a small apartment. The same day he moved in, the building was blown up by a local gang. Aryan and one other made it out alive and he began to hunt the gang down. After that was felt with, an agent found him and he was recruited

Likes:
-Chocolate
-peace and quiet
-although he won't admit it; someone who understands him

Are they good at their job?:Yes, yes he is

Personality: Jules is a sweet boy at heart. He has been through a lot and uses pranking and joking to feel better, though he never goes too far. He loves chocolate, bubble tea, and egg waffles as they are his comfort food and he eats them all the time. He likes sneaking around and is quite cunning and sneaky when he wants to be. He will try his best at things, but when he fails, he tries again and again. He is quite stubborn about his opinions and won't usually give in. He appreciates art very well. He likes sleeping in strange spaces, they give him more comfort than a normal bed in a normal room.

History: His parents never wanted him. He was an accident and was sent to a foster home right after birth because they didn't believe in killing babies. He was raised by the nasty orphanage owner and never had the chance to do anything he wanted unless he was sneaky about it. And that was what he excelled in. He had an inventor roommate who spent more time in their machines then caring about him, but they were friends. They were sorta close. He snuck out to art museums and places and one day he bumped into a secret agent on his way out of the orphanage for a nice jog at the park, the agent recruited him.

Are they good at their job?: When he wants to

Other: He misses his inventor friend, just a tad.

Mod
Name: Kyle Mitchell
Age: 15
Personality: Kyle is often bouncing off of different moods. He is mostly very sensitive and can be hurt very easily, though he doesn’t let his sensitivities get the best of him. He got into the habit of changing moods quicklyafter he figured out her got hurt so easily. Sometimes his moods are kind of like a new character/a different person.
History: Kyle lived a with a loving family who took care of him and loved him to the moon and back. On Kyles birthday, his parents always make him a special breakfast. Kyle waited in his bed for them to call him down but they never did. He got up to loud noises coming from the kitchen and went downstairs to find his parents gone. Every day he would try his best to figure out what happened to them, and when an agent saw how good he was at getting
hard-to-find clues, she recruited him.
Appearance: https://pm1.narvii.com/6322/a61857f7e...
Likes: solving mysteries, changing hair color, switching moods
Dislikes: Too much violence, yellow, sad emotions
Are they good st their job?: not the best, but not the worst

Name: Tavis (not Travis but Tavis)
Age: 20
Personality: he is a very calm and collected agent. He is a huge softy, loyal to his work and possibly if he head a significant other. He loves children and is a very sweet and compelling man. He warms up every room he enters with his element yet flirty smile and really loves his job. When he gets into a tiff though he can become very cold and closed off to other people. But he never means to hurt another's feelings unless they deserve it.
History: he grew up in South Carolina with his single mom and brother gene. He was a kid genius and finished university at the age of twelve and got his first job and fifteen. He the joined the army she he was 18 and trained in every single type of self defence and combat there is all over the world. Nothing tragic ever happened inbuilt life he just wanted to become an agent. He is a huge people person and can't wait to get started!
Appearance: born with dirty blond hair, has emerald green eyes, a very pale skin tone, but a very mudculsr build and great personality.
Liked: dating but I'd looking for a solid relationship, competition, and people, and solving murders.
Dislikes: cats, cold, church and porn

Mod
Are they good at their job?

He was the top of his class and loves his job

Sorry I meant for Travis to be nineteen