I laughed when I realized while listening to the podcast that the threads would all have ME in them. :P

Mod
terpkristin wrote: "I laughed when I realized while listening to the podcast that the threads would all have ME in them. :P"

Haha. I didn't even think about that when I made the thread.

I did a brief double-take after puting 'mortal engines' into the Goodreads search bar. The top result is by Stanislaw Lem - and I thought that might be a bad omen in this group!

The teaser trailer for the movie is basically just the first paragraph of the book.

Just goes to show how expensive and involved it is to bring our sci-fi and fantasy worlds to life.

" Children's Steampunk ! " at least that is the description. Maybe I can convince the younger twigs in the family tree to do a Summer read before the extended family get together. The kindle price is
$4.99 so that is sweet.

Great choice! I've read it before but will probably read it again.

Read this ages ago and loved it so I think I will re-read along with the group. (I already own the paperback so no excuses there!) The steampunk post-apocalyptic world of this book is batshit crazy but highly entertaining.

I Googled that to see what Reeve meant by the term and was amused, (and aghast), to see that in the book (view spoiler)[their god is called Thatcher (presumably after Margaret Thatcher).

Which probably means the US Municipal Darwinist god in this universe would be called Reagan ;-) (hide spoiler)]

I Googled that to see what Reeve meant by the term and was amused, (and aghast), to see that i..."

I Googled that to see what Reeve meant by the term and was amused, (and aghast), to see that i..."

Except that the British version is a pun. (view spoiler)[A thatcher is a machine that does to straw and wheat what the cities do to smaller towns. (hide spoiler)]

Mod
Trike wrote: "Except that the British version is a pun. "

Like (view spoiler)[what Thatcher did to the coal miners in Britain. It may be a double pun. (hide spoiler)]

Yeah, that’s why it works.

(view spoiler)[The closest we’ve come to a pun for Reagan was turning it into “ray gun”, and George Lucas taking a potshot with Nute Gunray from Phantom Menace, a combo of Newt Gingrich and Reagan. (hide spoiler)]

'Bout time I give this one a reread, I suppose...

"Jason Werner I saw that the audiobook is available through hoopla, if that’s your thing."
Thanks for pointing this out! I'll return my Audible copy.

I haven't read a book with the Sword and Laser group yet, so I just picked this one up on Kindle.

Started a day early... all this time listening to the podcast and this is the first book I’m reading along to. Woo!

In the middle of moving into a new city. I was concerned I would be too busy to read along, but the audiobook option on Hoopla means I'm unexpectedly about 60% of the way through. It also distracts me from the 31° heat.

Anyway, the tiered nature of London reminds me of the Matilda from An Unkindness of Ghosts.

This series is honestly one of my favorites. I think it only gets better with each book as well. Excited to see what everyone thinks!

Mod
I'm enjoying it so far.

I'm glad I watched the trailers for the movie. It really helps with the mental images while reading it.

This is the least spoilery trailer. Just a lot of traction city eye candy :-)
https://www.youtube.com/watch?v=fupYI...

I'm glad I watched the trailers for the movie. It really helps with the mental images while reading it.

This is the least spoilery trailer. Just a lot of traction city eye..."

Thanks for posting the link. I'm shooting through the book as I'm finding it good fun. The trailers are pretty similar to my imagined versions except (view spoiler)[Hester's face seems a lot less injured in the film version. As Peavey might put it "She's got a nose and everyfink!" (hide spoiler)] .

I'm glad we're reading this book, it's been on my list of books to get round to for quite a while.

As I got a copy of the book from the library, I was amused to see that Stanislaw Lem also has a book titled Mortal Engines. I can only imagine Veronica’s dismay are accidentally getting that book instead. 😂

OMG!! We only have today to read Mortal Engines 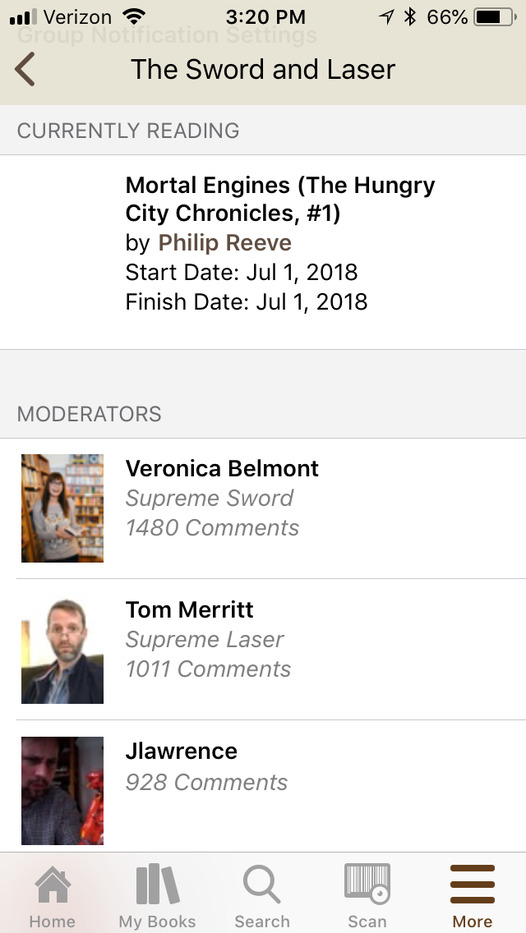 Well, I've got 13 minutes left to read the remaining 53%... I guess I should feel lucky that I had a long train ride today.

Welp, this'll be another book I finish late, then. :P

Seriously, though, I finished Circe today so onto Mortal Engines it will be!

I literally just discovered Sword and Laser podcast about a week ago and absolutely love it. Jumping on the book of the month bandwagon with this as my first book :)

Aw man! I was planning to go to bed early.

Mod
It was set as Starting and Finishing on the 1st of July when the books was initially added to the bookshelf. But I fixed that as soon as I noticed. (Same day it was added)

Obviously the Goodreads app didn't get the message ;-)

Also no moderator love for Rob or I on the App :-(

Mod
Yeah, I checked the end date was correct on the website, so I figured either the app was just completely wrong or that the end date had been updated.

Yet another reason not to use the Goodreads app. I pretty much only use it to make book status updates and nothing else.

For everything else I use Chrome in "Full Site" mode. It's a bit annoying to have to do that, but better than stuff being wrong/not working.

Tassie Dave wrote: "Also no moderator love for Rob or I on the App :-("

I use an iphone 5s with a tiny screen, otherwise you and Rob would have been there too.

The Goodreads app seems to have many flaws.

I just finished Mortal Engines while flying into London. Quite an amazing/creepy feeling to be flying past St Paul's (view spoiler)[exactly as Tom launches his rockets and things kick off in/around St Paul's dome (hide spoiler)].

No sweat, I finished it 3 days ago!

Is this technically a YA book? I went in completely blind (I didn't even read the Patreon book briefing) and the first chapter felt...young. Not that I'm complaining, just curious.

terpkristin wrote: "Is this technically a YA book? I went in completely blind (I didn't even read the Patreon book briefing) and the first chapter felt...young. Not that I'm complaining, just curious."

A graphic novel set in the same universe was proposed but never realized. There is some artwork for the comic at DeviantArt

As per the Wikipedia article for the book:

The original drafts were intended to be an adult novel, but after several rejections Scholastic said they might be interested in Mortal Engines as a children's story. In the refactoring the story was simplified, removing several characters and much content Reeve thought would not be interesting to children (city politics).

Having read this series a few times, one of the things I really like is there is a large time jump between book 2 and 3 which allows certain characters to return as adults, and I feel the books become heavier and darker in theme as the series progresses.

Ah well, one less book to read (I sometimes enjoy YA targeted at teens etc. Not kids books.)

Ah well, one less book to read (I sometimes enjoy YA targeted at teens etc. Not kids books.)"

Ah well, one less book to read (I sometimes enjoy YA targeted at teens etc. Not kids books.)"

This does not feel like a kid's book at all. I've finished the book and while the way some of the characters are introduced early on felt a little kid-booky, that changed very quickly. Most of the later scenes felt OK for teens at the least, and a few moments were rather shocking even for that.

While it's overall a fun adventure book, it does not shy away from some very serious themes, has some rather cold death scenes and contains some pretty gruesome moments.

I would not suggest giving this to your average 11 year old (and I've worked in a school library).

Interesting to see the different takes. I think I'm still going to pass since I've got about 50 books in the virtual TBR pile. I don't really get the attraction of reading young YA stuff and from this thread and some of the reviews this just doesn't attract. Thanks for the feedback, though, everyone.

I'm about 20% percent into the book and really enjoying it. I will say that even though I mostly read adult fantasy I have to read quite a bit of YA for work. The book does have elements of YA in it, but it is backed by some very good writing and a great sense of adventure so far.

In the first chapter Tom spouts a "That's not fair!" I was thinking this guy is acting like a 10 year old. I wasn't that far off. Before starting I didn't realize the protagonist was a young teen. It does clearly feel like YA to me. Maybe middle grade, but I'm enjoying it.

Imaginative world and character development. The story has kept me interested enough.

To me this reads like the novelization of a badly-written comic book. The story and characters simply aren't compelling. It's clear that the author gave no real thought to the actual science and engineering of the things he described. On the other hand, if I had read this while I was a young teenager, then I would probably have loved it.

Just started it. Yeah, YA feel with the 15 year old protagonist, plus his first issues are work drudgery / mean boss plus a bully. So YA. But the premise isn't any sillier than many other books I've read. I think I'll wind up enjoying this. In a bit of a drought on the TBR side, could read the others in the series.