This topic is about The President Is Missing
16 views
The Weird, Fun, & Miscellaneous > Clinton-Patterson novel sells 250,000 copies its first week

Since we're being political this month, here's an interesting politics/literature crossover. No matter what your politics are, or what you might think of Bill Clinton (and I have plenty of thoughts on either of those things) I would suggest that it should give anyone pause that he's now working with the champion of mediocrity James Patterson.

NEW YORK (AP) — Bill Clinton’s debut novel had the year’s biggest opening so far for a work of fiction.

“The President is Missing,” the thriller he co-wrote with James Patterson, sold 250,000 copies its first week. Alfred A. Knopf and Little, Brown and Co., the book’s co-publishers, announced Wednesday that the number includes hardcover, e-book and audio sales. NPD BookScan, which tracks around 85 percent of print sales, reported sales of 152,000 copies. That’s BookScan’s top-selling fiction debut since the latest “Diary of a Wimpy Kid,” which came out last fall, and biggest first week for adult fiction since Harper Lee’s “Go Set a Watchman” sold more than 700,000 hardcover copies in 2015.

“The President is Missing” was published June 4 and spent much of last week at No. 1 on Amazon.com and elsewhere despite some awkward and contentious moments in interviews with the former president. Clinton responded defensively to questions from NBC’s Craig Melvin about the #MeToo movement and whether he owes an apology to former White House intern Monica Lewinsky. Clinton’s affair with Lewinsky helped lead to his impeachment.

Ooooh, I've been waiting for this book for months, I'm glad it's out already.
The premise seemed interesting but now this part makes me want to start reading it right now :

The novel begins with a president facing impeachment, for supporting terrorism, and tells of his efforts to thwart a potentially apocalyptic cyberattack.

Gary wrote: "Since we're being political this month, here's an interesting politics/literature crossover. No matter what your politics are, or what you might think of Bill Clinton (and I have plenty of thoughts on either of those things) I would suggest that it should give anyone pause that he's now working with the champion of mediocrity James Patterson."

I've never read James Patterson before, please tell me more about this "champion of mediocrity" title.

I've read four or five. Most of them years ago, but here's the review of one I read a while back: https://www.goodreads.com/review/show...

There's an awful lot of low word count, high page count kind of stuff that goes on in his work, and price tags that seem geared for folks with more money than time, but still want that sensation of reading and finishing a book, so he winds up writing these novellas, selling them for $30-40 and banking an awful lot on the kind of effort that a lot of people sell for a tenth of the price.

I haven't read this particular book, but I'm leery enough of his work that a Bill Clinton novel effectively ghosted by Patterson (who might very well at this point be farming stuff out to graduate students) makes me skeptical. Aside from the word/page count Patterson engages in an awful lot of shoddy, obvious plotting, and his characters tend to be wish fulfillment and self-righteous, or would be if they weren't set up so cartoonishly to be actually in the right all the time.

So, I'll steer clear unless I start seeing some particularly erudite reviews that rave about the thing. Who knows, maybe he's suddenly taken over by the spirit of Dashiell Hammett in this particular effort? I'll let others test the water, though.

Oh yikes, I read your review, seems worse than I thought.

I'm not going to lie, I usually enjoy these "light reads", I call them popcorn type of books. For me it's like watching a Fast and Furious movie. I'm not expecting [insert_award_winning_movie_here], but I enjoy them, because I enjoy watching people driving fast (at least during the first few movies, now it's mostly explosions and bad jokes).

I was thinking about how this collaboration might have worked and I imagined something like Bill Clinton telling James Patterson at an event they both attended "you know, I've always wanted to write a novel, imagine a US president about to be impeached... because of...terrorism. And then there's this stuff cyberstuff..." and then James Patterson said "we'll write it together". And based on that premise Patterson wrote a book and said it was co-written with Clinton, because it would make great marketing, and of course he wouldn't want Clinton telling the world it was his idea.

Or maybe it was the other way around? So many possibilities!

I'm sure I"ll read it soon. Initially I wasn't expecting much, but now based on your review of that other book, I've lowered my expectations even more. I wanted to get the audio version which has several actors, one of them is Dennis Quaid but his performance sounds a bit too much. I'll go with the ebook version.

I'd be pleasantly surprised if there were any pleasant surprises. Let us know what you think.

Just so's we're clear: there's nothing wrong with a little light reading. I don't think it should cost $30-40 (or $17.99 in this case...) and Patterson seems to want to pass himself off as something more than a bubble gum level writer whose work engages in an awful lot of what we might want to classify as "fake rage" these days or manufactured indignation for the masses, if you will, with just a dash of xenophobia and late middle-age decline anxiety for flavor since that's his target demographic.

Still, if I get really bored I might pick this one up just to see what the current thinking is in pablum for self-esteem deprived. It's usually of interest in a meta way, and not much of a commitment time-wise.

So, Gary, I went and read the book and I was entertained and couldn’t put the book down. The plot was kind of simple and predictable, the characters paper thin. The characters I found to be more interesting didn’t show up so much in the book. The phrase “champion of mediocrity” kept floating in my mind while I was reading it.

I came in with low expectations based on what you had told me, and I think that helped a lot. I don’t know how much of this was Bill Clinton or how much was James Patterson, but the book has 128 chapters, so I guess we know who to “thank” for that. There’s a computer virus, and of course they wrote some silly things about that virus. I get that they’re not technical people but I'm sure there are consultants that could have probably helped with that part of the story to make it seem a bit less silly.
But like I said, I was entertained, this book was more “popcorn” than I was expecting.

I decided to listen to the audiobook and while Dennis Quaid’s performance felt a little over the top on the first couple of chapters, I either got used to it or he toned it down and I was enjoying his narration.

This was my first James Patterson book, and I don’t think this would be my last, but I don’t think I’ll be rushing to pick up the next one :)

Thanks for the review. 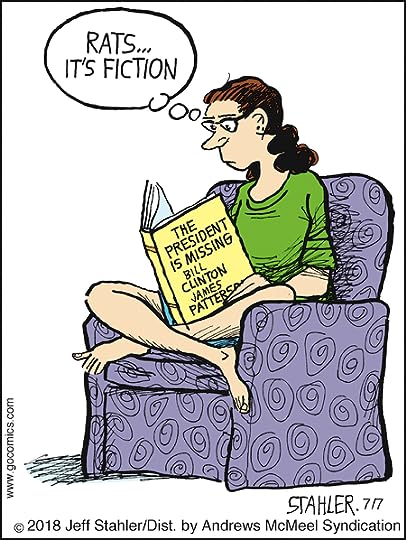