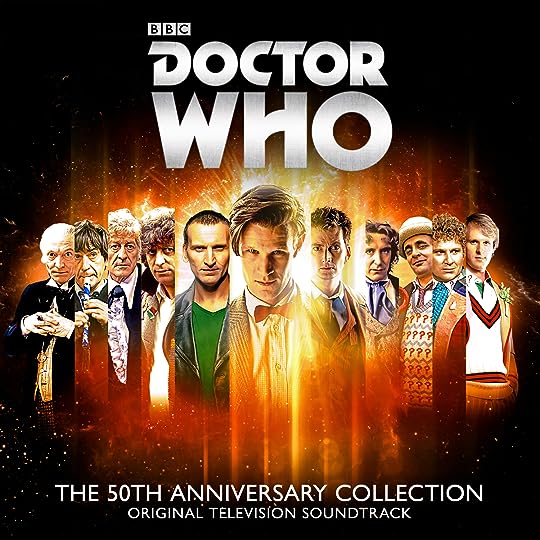 Julia,
Found this on Etsy and had to share with you: 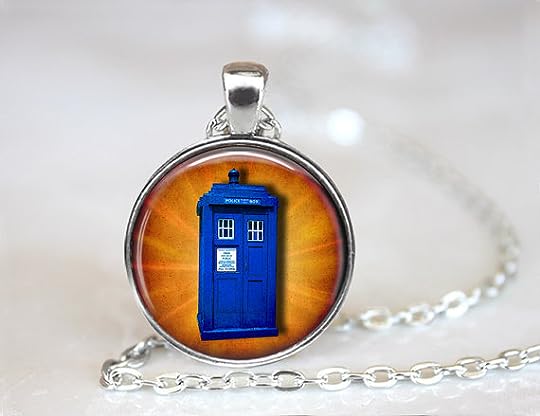 Who is your favourite Doctor?

The Ninth Doctor is my favorite played by Christopher Eccleston :)

Which Doctor is your favorite, Eugenia?

Jen ƸӜƷ wrote: "Julia,
Found this on Etsy and had to share with you:

Thanks, Jen--my daughter got me this one from Etsy last Christmas :-) 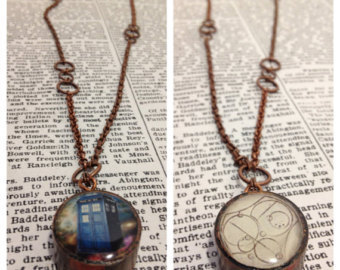 David Tennant is my favorite doctor! 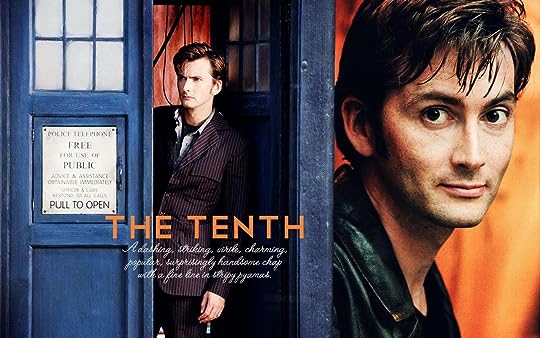 Julia wrote: "Jen ƸӜƷ wrote: "Julia,
Found this on Etsy and had to share with you:

Eccleston and Tennant are great actors, but I have a weakness for the 11th Doctor. He was funny and yet deep, and the Amelia Pond / River Song story was just wonderful! I was terribly sad to see Matt Smith go, it won't be the same without him. 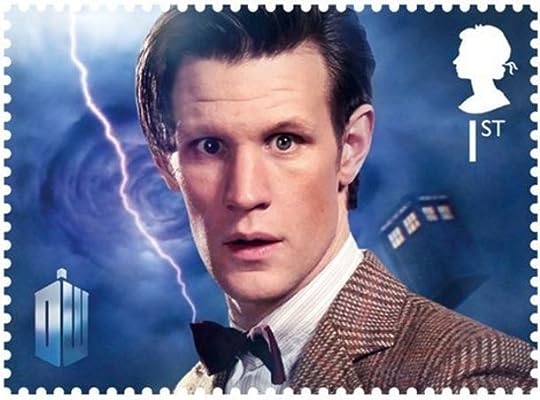 Eugenia wrote: "I want one of those! I wonder if they ship to Argentina... ;.)

Eccleston and Tennant are great actors, but I have a weakness for the 11th Doctor. He was funny and yet deep, and the Amelia Pond / R..."

I love Dr Who as well. Overall, I think David Tennant was my favorite overall, but I also quite liked Matt Smith, particularly in the first season he did. That made the switch a little easier. :)

What was everyone's favorite episodes?

There are several top ones for me, but I love "Gridlock" (the one about the never ending traffic jam). 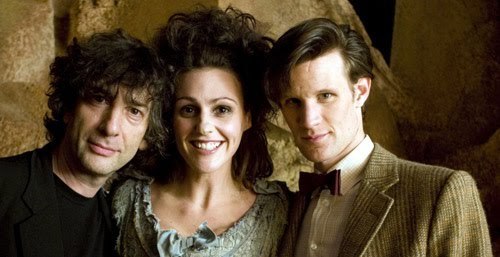 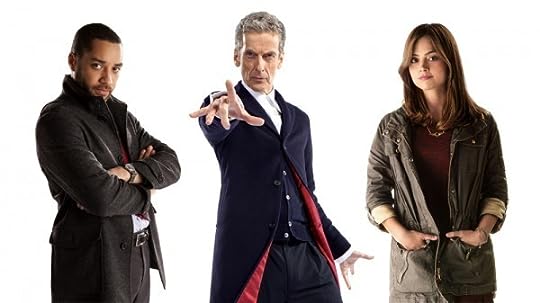 The show itself is at 8 pm on BBC tomorrow (Aug. 23rd)--since I don't have cable, I'm hoping to find it SOMEWHERE online. I think Capaldi will be an interesting choice for the new Doctor--a move away from the young handsome versions of Tennant and Smith.

So I just paid Amazon their $5.99 for the first Capaldi episode, "Deep Breath", and it's worth every penny. He's funny and crazy and cranky and wrinkly and I really like the new dynamic with Clara. Feels more like the Christopher Eccleston doctor, since Tennant and Smith have been sort of heart-throbby. Time for a new Tardis captain, and I'm happy to go along for the ride!! :-)

I loved this picture of when Clara finally accepts him and hugs him--and he says he doesn't think he does this anymore! 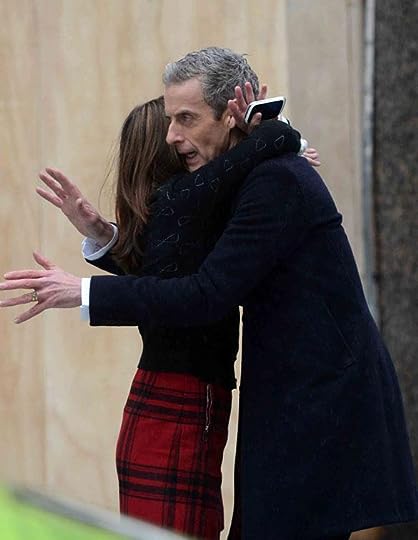 Julia wrote: "So I just paid Amazon their $5.99 for the first Capaldi episode, "Deep Breath", and it's worth every penny. He's funny and crazy and cranky and wrinkly and I really like the new dynamic with Clara...."

I think I felt mostly like Clara along the story, I still cannot accept a new doctor just like that, especially after Matt Smith (sigh...)

That being said, I liked the episode overall. I loved the way the Paternoster Gang gave the Doctor a hand, as well as the writing in general, and I'll keep on watching!

Julia wrote: "So I just paid Amazon their $5.99 for the first Capaldi episode, "Deep Breath", and it's worth every penny. He's funny and crazy and cranky and wrinkly and I really like the new dynamic with Clara...."

Ooh! I know what I'm watching on Amazon tonight!

Oh, and I actually found Christopher Eccleston to be quite attractive ;)

We should create threads for each Doctor :)

And for our favorite companions! I loved Sarah Jane, who would up with her own series: http://en.wikipedia.org/wiki/The_Sara... 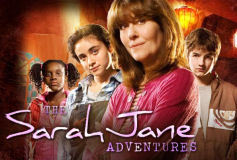 Elisabeth Sladen played Sarah Jane, who "was an investigative journalist who travelled with the Doctor in his third and fourth incarnations. She reunited with him in his tenth incarnation and had adventures with him and his eleventh incarnation. Sarah Jane met nine of the Doctor's incarnations in total: those already mentioned and the First, Second, Fifth, Seventh, and Eighth. Due to her experiences with the Doctor, she was entrusted with the task of protecting Earth from hostile extraterrestrials and helping peaceful aliens. She shared these adventures with her young companions/surrogate family in her own series." http://tardis.wikia.com/wiki/Sarah_Ja...

Here she is with Tom Baker, the fourth Doctor, and she reminds me a bit of Clara :-) 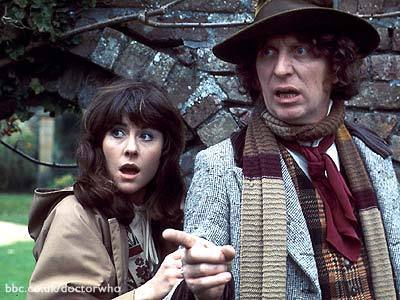 And here she reunites with the 10th Doctor (Tennant), who fixes K-9 for her. 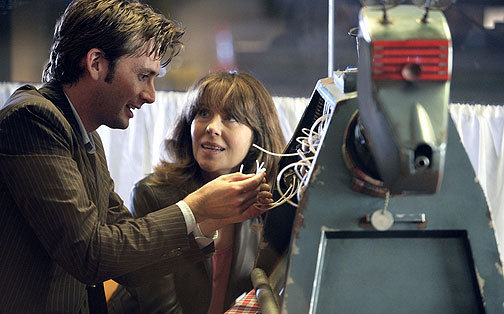 Sladen was wonderful when she asked why he hadn't come back for her--and also wonderful when she let him go with Rose. This 3 minute video clip is so good, especially the bickering between Sarah Jane and Rose!
https://www.youtube.com/watch?v=RAszj...

Elisabeth Sladen died on April 19, 2011. She was 63 years old. Her death brought an end to the Sarah Jane Adventures series, which ran for five seasons.

Here is David Tennant's tribute to her: https://www.youtube.com/watch?v=7wNDu...

One of my friends, a big Dr. Who fan, is hoping that the companion will be a non Brit at some point.

You're most welcome, Jamie Lynn--my daughter let me know that Sladen's husband, Brian Miller, was in this first episode of Capaldi's new Doctor, playing the tramp he meets as he's bewailing his wrinkled face: 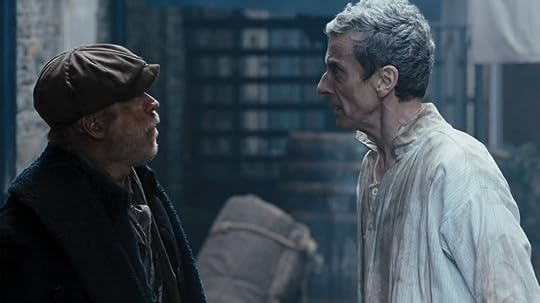 Oops! I said it wrong--Brian Miller is the late Sladen's husband (I fixed the post). My daughter just let me know the connection--both of us are Whovians :-)

Hmmm--I just watched the second episode of this season online, and while I'm liking this new Doctor a great deal, he's talking so fast that I'm missing some of the dialogue! Also, far too much of the episode was blowing things up, imho. Capaldi is a good actor and I'm liking Clara with him--but hopefully the dialogue can slow down a bit!

Julia,
I typically set my Amazon Prime with subtitles to catch things I might miss, maybe this will help?

Proof of my favorite Doctor: 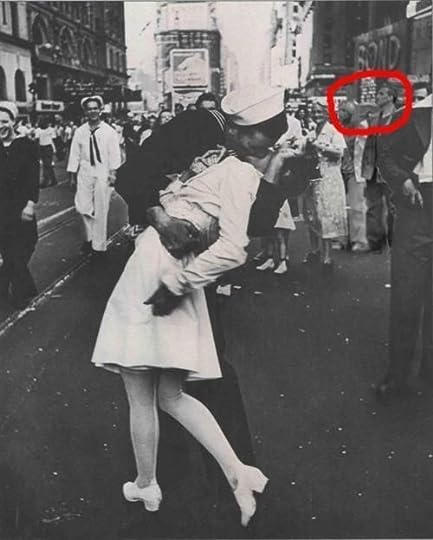 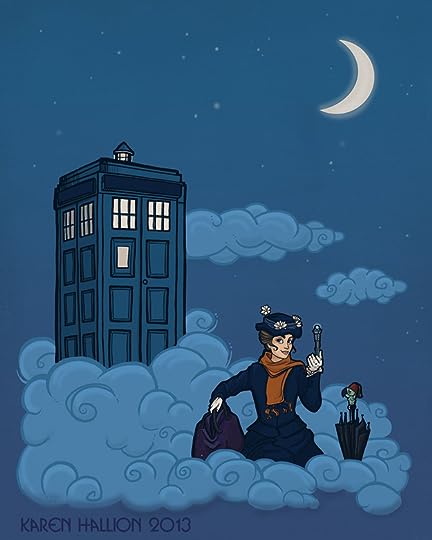 Jamie, the "some html is ok" link just above the line gives instructions--but a friend told me this way, which seems easier to me :-)

Start with the symbol made by capitalizing the comma key: <

After that, type "img src="

Then copy and paste the url of your picture, and close by capitalizing the period key:> 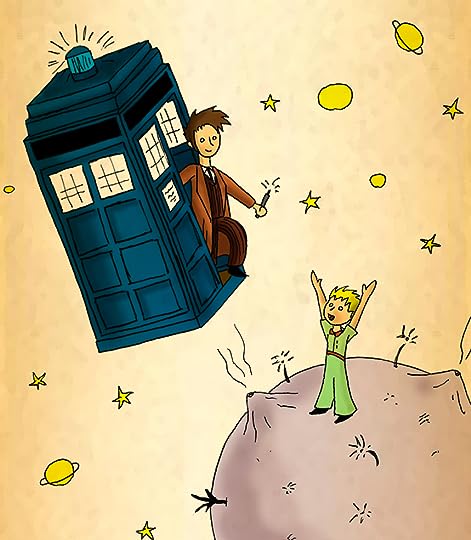 The Doctor and the Little Prince are two of my favorite other-worldly characters ever! 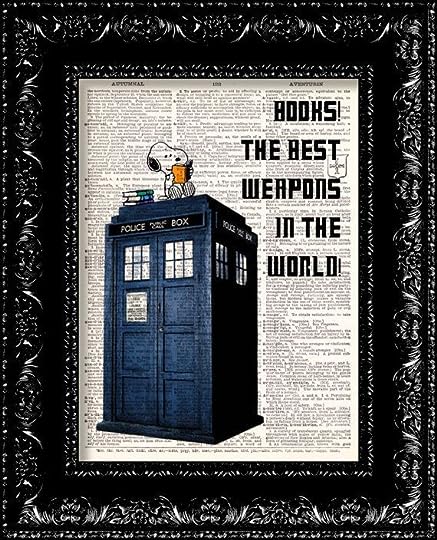 Now THAT'S a combination! Snoopy, the Doctor, and books! Thanks, Jen--definitely going in my smile book :-)

:) I found tons more, I'll post a few Snoopy with Doctor Who tomorrow :)

I just watched the 4th episode of season 8 with Capaldi, and it's one of my favorites ever. It's called "Listen", and his short monologue at the beginning shows just how good an actor he is. The nuances on that face of his are brilliant imho. 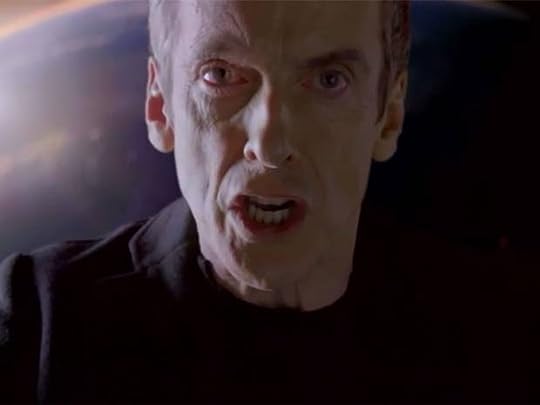 Mod
I can see graphics on my goodreads app now !!!

Is this a new thing? I've never seen graphics on my app, will have to check! :)

Forget Doctor Who. What I mean is, this is my attitude towards the show at this point. For me, its one of the worst cases of a series which drags on way past its timeliness and poignancy; well into the stage of "annoyance". What is the appeal of these types of never-ending series and franchises? Why is this such a 'big thing' these days? A similar show but much better conceived and handled (imho) is "Blake's Seven" . Same creator, (Terry Nation). The thing about B7 is that it had a definite end-point. Makes DW seem trite and childish. A firm ending simply makes better drama.

Mod
I found this link on gift ideas for Dr. Who fans!

Thanks so much, Laura--my daughter and I already have our sonic screwdrivers, but that site has links to things I haven't seen :-) You just helped me with my shopping!

I loved the scene between Captain Jack and Doctor 9 regarding their choice of weapons.

Mary wrote: "I never heard of Blake's Seven until I looked it up. It only lasted 3 yrs. Doctor Who could go on forever and people would still love it. Although after this doctor it has to end. The doctor can on..."

As long as the series remains popular the writers and producers will find ways around the regeneration quagmire.

I'm rather liking Capaldi. They should bring back Captain Jack for a few visits.

Mary wrote: "My son showed me this. It'll make you grin!

Mary wrote: "My son showed me this. It'll make you grin!

I can't WAIT to send this to my daughter! What a delight--haven't seen Tennent have that much fun ever!!! Thanks so much :-)

Mary, I've sent that link to all my fellow Who fans. And the writers of the song, The Proclaimers, are in the video :-)

Learned this on Wikipedia:

"​At the end of the fourth series of Doctor Who, a video of the cast and crew of the show (as well as The Proclaimers themselves) singing and dancing along to the song was released, as a farewell to David Tennant, Russell T. Davies, and other key players in the show's development; hailing the shift into the Steven Moffat era of the show."

I have been enjoying Tennant as The Doctor, wasn't sure how I'd do with the transition from my favorite, Eccleston.

I posted this in the "Anything for a Laugh" thread, but it makes me smile so much I'm putting it here too :-) 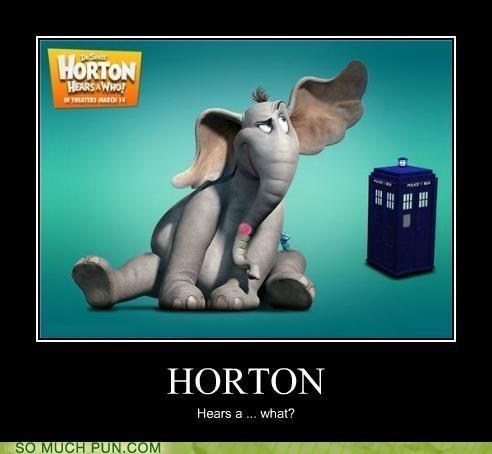 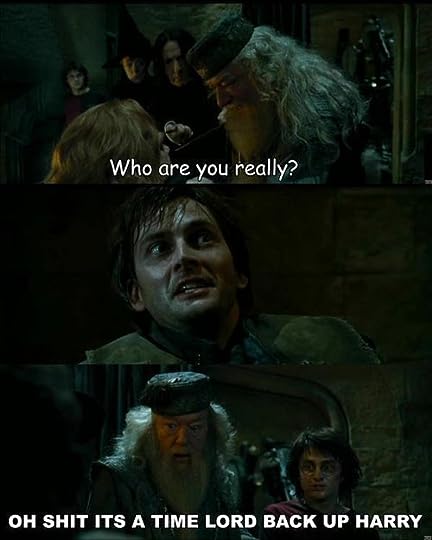 I just watched the 7th and 8th episodes of Season 8, "Kill the Moon" and "Mummy on the Orient Express". I am LOVING Peter Capaldi, and totally agreed with Clara--both when she became so angry with him AND when she decided to stay with him. 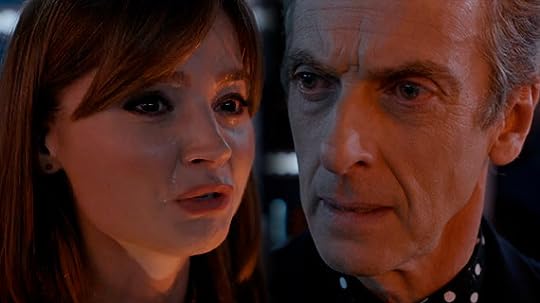 This is NOT the Matt Smith goofy doctor--Capaldi still has elements of humor, but he carries a darker burden of all his memories. I'm really curious if they are going to bring Gallifrey into the series, after it was brought back into existence in the amazing 50th anniversary special THE DAY OF THE DOCTOR. 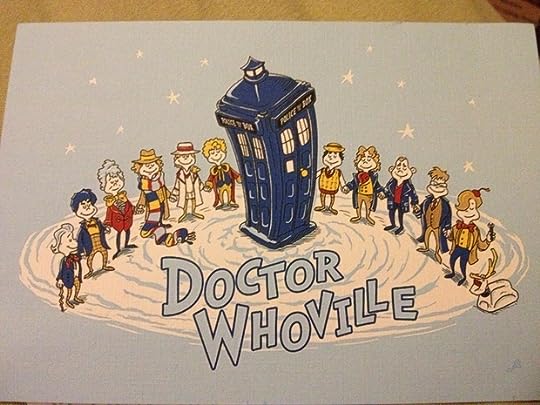