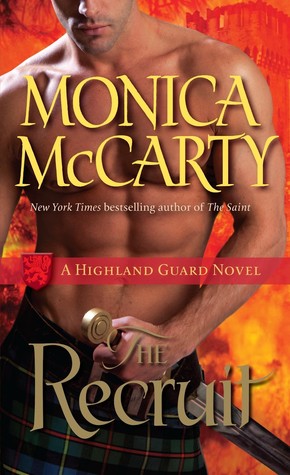 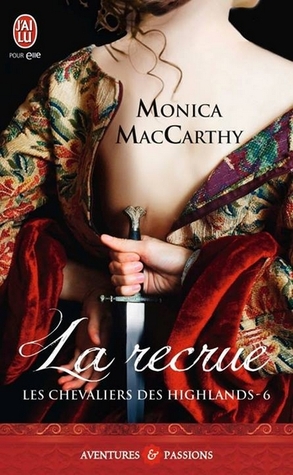 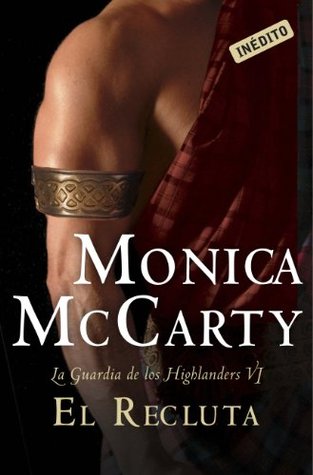 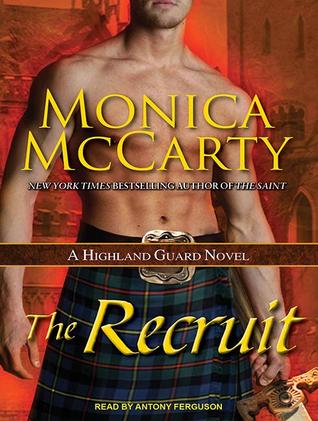 The Recruit, by Monica McCarty

Scotland’s King Robert the Bruce is retaking his kingdom from the invading English. To win, he’ll need all the grit and courage of his elite band of warriors, the Highland Guard, men who fight without fear and love without limits.

Fiery, aggressive, and bold, Kenneth Sutherland is a true champion—skilled with any weapon and driven to win. Now Kenneth is ready for his greatest challenge: joining Robert the Bruce’s secret army to fight among the elite. Kenneth’s best chance to attain that honor is by winning the Highland Games. Focused and prepared for victory, he is caught off guard by a lovely wisp of a woman—and a stolen moment of wicked seduction. Her innocent arousal and her shameless hunger fire his blood. He will win his place in the guard—and in Mary of Mar’s bed.

The ruggedly handsome hero-in-the-making stirs a heart that should know better. Mary vows that her surrender will be sport only—no promises, no heartbreak, just one night of incredible passion. Nothing, she swears, will persuade her to give up her hard-wrought independence and put her fate in the hands of another powerful man. But with every gentle touch and heart-pounding kiss, Kenneth makes her want more. Now Mary wants his heart. But is this determined champion willing to surrender everything for love?

Please join us, or just stop in and say, "Hi!" or tell us which cover you prefer. But...

Who's ready for this?

Yes. And it reminds me of something Japaneses!It doesn't look like a medieval cover !

ShoSho wrote: "Yes. And it reminds me of something Japaneses!It doesn't look like a medieval cover !"

I agree. I thought the same thing when I first saw it.

How is everyone doing with this series? Is the interest still there for next month? Or do we move on to something else?

I am really enjoying this series. McCarty can write a love scene like nobody's business!
I have to go back and read the first three because I jumped in on The Viper.
I vote to keep going.

Glad you're enjoying it, Claudia. ☺

Finished! Loved this one! I think this is my favorite to date. Looking forward to the next one.

Ah! Loyal Claudia. GTK this one was the best. :o)

This was my first McCarty book and I was pretty blown away by it. It is so rich in history yet still has a lovely romance. When the hero and heroine first met (view spoiler)[and he was having sex with another woman (hide spoiler)] I almost put the book down in disgust but after awhile I was able to move past it and enjoy it immensely. Here is the review I wrote almost 2 years ago.

Oh, yeah. There would be a good possibility I would put the book down after that, too, Christina. I've done it before with Notorious Pleasures - and it took me ages to finally read it, even though I love that series.

I did enjoy your review, especially the "my inner Gloria Steinem" part. LOL!

I enjoy Elizabeth Hoyt also but just hate some of her characters. Notorious Pleasures is one I've been putting off for awhile even though I enjoyed the 4th book a lot in the series (I have read them out of order).

Yes, EH has become one of my favorite writers.

The little fairy tales at the beginning of each chapter? Yeah. Very clever.