Where is this person going? Why the choice of shoes? Tell us the story in poem, flash fiction, short story - whatever you're inspired to write. Just keep it YA and LGBTQ. Use more than one box if needed. Please mark the end of your writing with a symbol (####) or "the end". And have fun! This prompt will be up for June and July, and remember you can write for older prompts too. 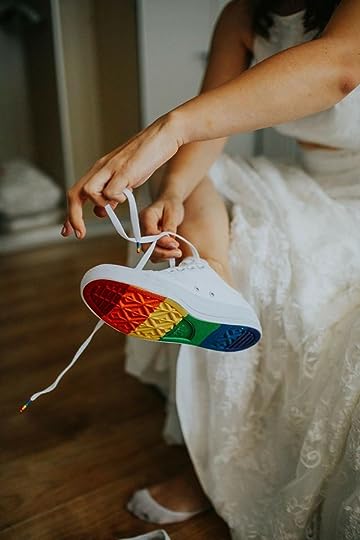 The color white is the rainbow compressed into one space, all the colors sharing a room. That's what I told myself when Mom said I had to wear white for my confirmation. Not that it's not already ridiculous that I'm having a confirmation because I'm sixteen and anyway, I don't really believe, not the way she and Dad want me to. Not like Nana does, so caught up in this new rush of Christ-holiness and joy that she sheds it around her like a dog shaking water from their coat and making everyone else wet.

We've never been religious like this but Nana is dying, and it pleases her. I do want to make her happy, in the time she has left. I do. And yet...

This church is okay. If she had to set her eyes on the next world, and decide to get right with God by way of prayer and holy-rolling, then at least she picked a church that wouldn't stone me out the door for being a lesbian. They wouldn't be happy about it, and there are churches that would, but perhaps those were all too big of a stretch for her, as she heads back toward the comforts of her childhood. This one loves the sinner and shakes their head sadly and whispers about the sin, little splinters of disapproval that aren't hate, but sting like a hailstorm, cold and sharp on the skin.

I was going to be good. Really I was. I went to all the classes and learned by rote the things they wanted to teach me. Some good, and some boring, and a few that have been used to tell kids like me that we're not good enough, not quite right with God, and should ponder our sins. Not that I mind pondering some of my sins... I stocked up on extra ones to ponder over at Brianna's house yesterday. Mom at least didn't stop me, just pretended she didn't know where I was going, and I can live with that forever, if it would keep Nana with us. But it won't.

I was good when I went shopping with Mom and didn't resist when she bought me this dress that is fancier than I'd pick for a wedding. Plus little half-sock things to go under these pumps that look like ballet shoes and are as far from my usual Doc Martens as a shoe can get. Although no heels. Blessings on no heels, as the pastor would say, unless that's too blasphemous and secular. Sometimes I'm not sure.

I was going to be good today. But I know that out there in the pews will be Nic, watching his little brother be confirmed, wearing a skirt and tights because his mom would be shocked and take to her bed with a heart attack if he came out to her, so he's hiding as his body changes around him. He's waiting till college and escape and I can't blame him, given who his dad is. And there's Jason that I saw kissing a boy I don't know, back by the lockers at school, and I don't know if he's out to his family or not, but still in this place of stained glass and hushed voices and good works of a very narrow sort, I have no doubt he's stood under that hailstorm a time or two, battered by people who have no idea who he really is or why he turns and walks away.

So I gave the pumps to my dog to chew on, and I'm wearing these. When Mom sees, it will be too late, and after all, they're the only other white shoes I have and better than my ruby-red Docs, right? Better than black high-tops with rubber toe caps. And when I kneel, and the soles show, it will just be the light of the whiteness scattered in a rainbow, like God does after a rain, and the little kids will think it's pretty and the adults may scowl but I bet they pretend not to notice.

I'm going to fly my colors. And believe in my heart that the real God won't care.

Wow, Mika, just wow! That was so good, so powerful!! Thank you for sharing it!

What Sammy said. A superb piece of writing...and all from the sole of a shoe. Your creativity is quite marvelous.

Hey Mika, I was stuck thinking wedding dress - cool that you found a different possibility and created something with that emotional impact to it.

Late August, a new place--
far away from where he was born
(but not too far)
a place where a cross didn't hang over his
bed
a whole new world, all to himself

The boxes were unpacked, set aside, his things were few
and Mother cried, said, "I'll miss you."
he nodded his head and promised to call, to write
when they were gone, pulled out a box, with shoes
of pure white,
and on the bottom, Noah's colors.
Slipped them on, like new skin,
and waited for his life to begin.

It's 2:00 AM so I shouldn't be writing anything, least of all poetry, so I apologize for that if it sucks.

I wouldn't be so hard, Xander - I think it's pretty good! Very evocative.

Xander I really liked your poem. It says so much—conveys a story that intrigued me. Thank you for sharing it with us.

That was lovely and subtle. An emotional punch in there with just a few words.

Xander wrote: "Late August, a new place--
far away from where he was born
(but not too far)
a place where a cross didn't hang over his
bed
a whole new world, all to himself

The boxes were unpacked, set aside, h..."

What a great poem!