Mod
This shop not only serves over 5,000 different kinds of candy, making it the largest candy store on Earth. With its' crazy colourful pop up installations and giant displays, you will easily feel like Willy Wonka might have had a hand in the design. 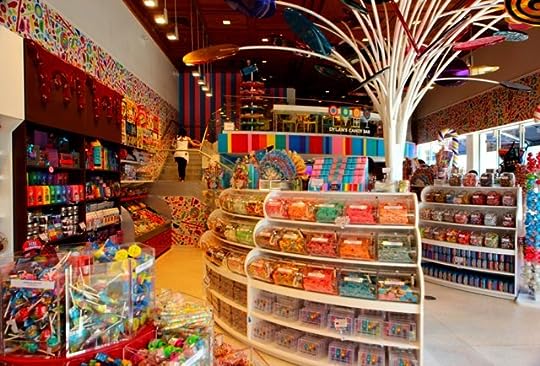 Isadora had been having the worst day ever. She had gotten her AP Chemistry test grade back, and her grade had been a horrifying 82%. It put her GPA, which her scholarship depended on, at jeopardy, and if she slipped up like this again, she could sacrifice her chance of getting into Berkeley on a full ride and being stuck in New York City for the rest of her pitiful life. She had also spilt some bright yellow mustard from her hot dog at lunch on her Constance uniform, which was incredibly mortifying once she arrived back at school. And then, when she came home, like the cherry on top, her step-sisters had thrown out her makeup, just out of spite, so she had to dig through the trash like a raccoon to retrieve it.

Isadora had been working a load of odd jobs too- pet-sitting for the apartment above her, babysitting a couple toddlers, mopping the floors of a bodega at night, just so she could keep up appearances. She had spent nearly all her savings on a second hand iPhone X with a badly cracked screen that she didn’t even have a data plan for, just to act like having a thousand dollar phone was so casual. She couldn’t wait for college, when she wouldn’t have to worry about keeping up the charade. And now, all she had to her name were a measly twenty three dollars, just enough for a sugar rampage at Dylan’s, that would hopefully soothe her spirits.

Eliza never needed an excuse to go to Dylan's and after running errands with her mom after a long day of lectures and too much drama, she was thankful for the credit card nestled in her bag. And perhaps a little surprised. Before Ellie had turned fifteen, her mom wouldn't have ever even thought about letting her leave the house with unchaperoned with a credit card. She was too scatterbrained, too excitable and therefore liable to forget or lose something. Ellie couldn't really blame her mom, either, which made the warm feeling in her belly feel all the better. Maybe her mom was finally recognizing her as an adult, as someone worthy of responsibility. It made her beam with pride and pleasure as she entered the candy-shop, her sweet-tooth aching.

A smile spread across Ellie's face as she glanced around the store, excitement bubbling within her. It was impossible not to feel light and bubbly inside of Dylan's with it's rainbow colored walls advertising every goodie that Ellie could think of and promising a sugar rush later. She began loading up on chocolate balls and lollipops and gummy's of every shape, hardly paying attention to where she was going as she wandered through row after row, barely containing her peals of glee.

There was always a certain child-like wonder with Ellie, a quality that was only further amplified when she was in places like Dylan's. Even her purple dress seemed like it had been made for such an excursion. She had just added yet another chocolate bar to her growing mountain of goodies when she brushed up against a girl who she was certain she'd seen around Constance. "Hey!" She said, turning to look fully at the girl. "I've seen you around Constance, haven't I? Isadora?"