Mod
Daniel and Harlee are starting a buddy read for

soon. Everyone is welcome to join!

There are no set chapters per day, we just read at our own paces and start each post with how far along you are, i.e., Chapter #, %, using spoilers where needed. Have fun!

Thanks for setting this up Karen!

I'll start this either tonight or tomorrow.

I started it and I'm on page 20. (6%)
I'm not sure yet how I feel about the writing, which is very unique. I'm also not sure how I feel yet about the two characters. I'll have to keep reading to find out, but I'll wait for you to start before going any further.

Mod
I had a hard time with the writing too, Daniel. Some people love it, but I didn't like the style. I found it so distracting. I did like the storyline though.

I stopped at 20 also. I do feel the mechanical writing style you mentioned. I think it's because she's institutionalized. It's weird for me seeing numbers in sentences instead of them being written out. Also, some of her sentences seem to be missing commas and it's throwing me off a bit.

Yeah, there's lots of choppy phrases just stuck together. Lots of run on sentences, too. She sounds more like a robot than a person.

Right now, yeah. I'm wondering why Adam walked in and immediately was a jerk to her. Also, this place they're in sounds scary and interesting!

I'm intrigued by the world for sure.
I can't quite figure out Adam. Comes in, immediately takes her bed, suddenly acts nice, gives her a blankie, and then apologizes for being an ass. Huh?

Right?? I think once he realized he might need her to help him out, he needs to play nice lol I wanna learn more about him though. What did he do to get put there?

I guess... That's a sudden change, though. I prefer nice guys rather than jerks. The likes of Liam from TDM, Sam from Gone, Percy from, well you know... I find those guys easier to root for.
And yeah, I want to find out more about him.

I'm getting sidetracked, but if you liked Percy you'll also like Sam from Gone. Both have similar traits- kick butt, kind, funny, and loyal.
I'll continue Shatter Me tomorrow.

Yay! Yupp, me too! I need some sleep lol

How are you imagining the characters?
For me, Juliette kind of looks like this. 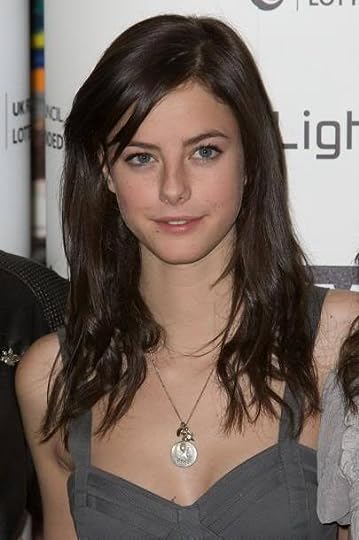 Except maybe sklightly darker hair and brown eyes. (And of course a somber expression.)
Adam looks like this:

But with blue eyes and different hair.

On page 42.
(view spoiler)[ They've known each other before. Which begs the question, why don't they remember?
Also, at least Adam's earlier actions were explained.
Oh, and this is getting very romancy very quickly. Not sure how I feel about that. (hide spoiler)]

Page 90. Lots of thoughts running through my head, I'll wait until you get there.

:) this is fun, I really liked this series a lot!

Oh also, Adam reminds me a lot of Four from Divergent, but the thing is he's only supposed to be around 17.

I'm on page 38 right now. I'm hoping I can get further tonight. I agree with your image of Juliette, but a bit skinnier because of how under fed they are. But Adam I picture as being a bit tougher looking.

I feel like the author is describing him as older than he is. He's only 17, but it feels like he's 22.
And I know my picture of Adam is way off, but that's how I WANT to imagine him. I don't want to imagine him as another Four.

Page 142.
Still blah. I'm still struggling with the appearance of Adam, and I'm not connecting with Juliette at all.
Hoping it gets better. I'll continue tomorrow.

I'm stopping at 96 for the night. I'm still having some trouble connecting with this book too. I'm liking seeing some backbone from Juliette but I need to know how she knows Adam! I liked seeing her power, finally knowing how it works. This world is confusing me a bit, I'm hoping it starts making more sense to me. Lastly, Warner seems like a good villain type, but, just like Adam, there seems to be something about Juliette that makes them go soft and it kind of bugs me.

Oh, and the run on sentences are getting on my nerves a bit...

Mod
If I remember right, the strange writing style eases off. And it does all come together!

Yeah, there are definitely a lot of things I need to know.
Why Juliette likes Adam, the history they have, the things he's hiding from her, etc.
Also, I have no idea what the political or environmental context is yet, so I don't understand any of the characters' positions and motivations.
If this gets cleared up I may be able to connect more with this book.

p 190.
(view spoiler)[ Still no idea what the political circumstances are. Still can't connect to the characters. Still can't get a feel for what Adam looks like. Still can't appreciate the writing. p 148: "Once, twice, a hundred times his lips taste the nape of my neck and I wonder if it's possible to die of euphoria." *snorts and rolls eyes*
Saving grace is the complicated dynamic between Warner, Juliette, and Adam. (hide spoiler)]

(view spoiler)[Daniel wrote: "p 190.
Still no idea what the political circumstances are. Still can't connect to the characters. Still can't get a feel for what Adam looks like. Still can't appreciate the writing. p 148: "Once,..." (hide spoiler)]

I'm leaving for a trip tomorrow, so I won't be able to get much reading in. Should give you some time to catch up and pull ahead.

Yes! I've been a bit busier than I expected this weekend. I'm hoping I can catch up to you tonight and tomorrow! Hope you have a nice trip! :)

pg 99 I like that she just caught Warner completely off guard like that. I wanna know why...

"Go to hell." He works his jaw. Walks to the door. "I'm working on it." I love statements like this that make you pause and think, 'Dang, this guy is bad.'

I'm not that big on Adam, for whatever reason.
It kind of seems like Juliette's going,
"Holy crap, he touched me.
Holy crap, his shirt's STILL off.
Holy crap, his lips.
Holy crap, his arms.
Holy crap, his torso.
Holy crap, I FEEL stuff.
Holy crap, holy crap. holy crap." aaaaand repeat.
I'm exaggerating, but still. That's what it feels like. And that's not really helping me like him more. Or her, for that matter.
Warner's the best character so far- complex, evil, powerful, and secretive. I really like the relationship between him, Adam, and Juliette.

Sorry, I saw you were reading this and had to jump in XD

Yes, she is wayyy too gaga for Adam lol

No worries Natalie! You're welcome to jump in!
I agree, Warner's the best developed character so far.

I kind of love him. I'm a sucker for bad guys and I want to know more about him!

When I read this book I liked Adam, but I felt I only knew him on a physical level because Juliette just describes his body as being god-like. Not that I don't appreciate it ;) But Warner, like you said, was better developed because we focus more on what he says instead of what he looks like.

You hit the nail on the head, Natalie.
We get to see a lot of Warner- what he stands for, what he values, and what kinds of things make react in certain ways. In that way, he's far more interesting as a person.
With Adam, all you get to know is his body. There are many who I'm sure would be OK with that, but I want more.
Because I'm a guy who is attracted to girls, it takes way more than a "hot body" to get me to like male characters. I admire characters who are physically tough, but for me, personality trumps physicality. Some of my favorite fictional characters don't have amazing bodies, but they have likable personalities. Sam from Gone, Liam from TDM, and Percy Jackson are a few examples. And I haven't gotten to know Adam yet on a personal level, which is a bummer.

for some reason in the first book I really liked Adam

Shatter Me (other topics)