Mod
Polls are up! https://www.goodreads.com/poll/list/1...

The dirtiest book of all is the expurgated book. ~Walt Whitman

Welcome to our September selection where we will read a book that has been banned or challenged. Oh, how taboo!

Just make a selection from our Banned Bookshelf and nominate your choice here.

Please refer to our Books Already Read shelf so that we don't nominate previous selections.

Nominations end on the 10th at which point the poll goes up.

I have read many of these already, great books all, but I prefer to nominate one I haven't read before. I always enjoy fresh reads! With that in mind, I nominate July's People. I've heard lots of good stuff about it, and the story looks interesting, a modern classic.

One of my favorites from my youth!

The Wonderful Wizard of Oz by L Frank Baum

I'm with Greg--I'd like to read something I've not read before, and also a book that has been challenged in the 21st century. The Absolutely True Diary of a Part-Time Indian by Sherman Alexie was challenged in 2010, 2011, 2012, and 2013. It won the 2007 U.S. National Book Award for Young People's Literature.

"Sherman Alexie tells the story of Junior, a budding cartoonist growing up on the Spokane Indian Reservation. Determined to take his future into his own hands, Junior leaves his troubled school on the rez to attend an all-white farm town high school where the only other Indian is the school mascot. Heartbreaking, funny, and beautifully written, The Absolutely True Diary of a Part-Time Indian, which is based on the author's own experiences, coupled with poignant drawings that reflect the character's art, chronicles the contemporary adolescence of one Native American boy as he attempts to break away from the life he thought he was destined to live."

Alexie was born with hydrocephalus, a condition that occurs when there is an abnormally large amount of cerebral fluid in the cranial cavity. He had to have brain surgery when he was six months old. He was not expected to survive, or, if he did so, was expected to suffer mental disabilities. However, Alexie's surgery was successful and he survived with no damage to his mental faculties. The protagonist of the book, Arnold Spirit, has the same condition.

I'd like us to read a work by a member of the First Nations. 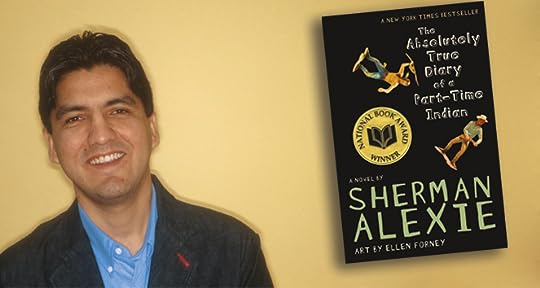 (Laura, can you add this one to the banned books shelf, please? 226 pages)

Mod
will do! thank you Julia!

Interesting Julia, a blast from the past! I haven't read Alexie yet either, but I did see the movie Smoke Signals that he wrote the screenplay for (loosely based on one of his short stories). I saw the movie in theaters when it came out in 1998, and I remember it being alternately hilarious and deeply moving, delightful. It was one of my favorite movies back then. I'd definitely enjoy reading a book he wrote! Good choice!!

Info on the movie: 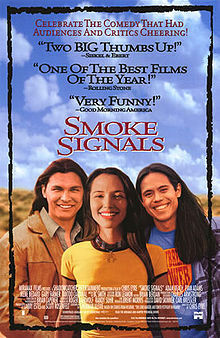 I'd also like to read "Harriet the Spy." That's one that I think I could get my children to read with me. I wonder what they'd say to learned that it was a banned/challenged book.

Seriously, I'd love to read this book!

Paulina makes a good point--Laura, could everyone just choose a "banned book" for themselves and then we could all share our reactions? I'd be really interested to hear about more than one "banned book", since there are so many!

One of my f2f book clubs is doing that with Steinbeck--instead of all of us reading the same book, each of us can choose which Steinbeck we want to read and then share with the group.

Mod
Julia wrote: "Paulina makes a good point--Laura, could everyone just choose a "banned book" for themselves and then we could all share our reactions? I'd be really interested to hear about more than one "banned ..."

I like that idea. How about we do a hybrid...We will have one group read that wins the poll. At the same time, everyone may chose their own banned book and start a thread (or individual threads) for discussion from anyone who wants to join in.

For my part, I think that sounds like a good compromise Laura! I actually like it when several read the same book because it generates more back and forth dialogue, which is one of the things I really like about GR, getting many opinions and insights into the same piece.
But with what you suggest we can allow divergence for people who want to read something else and find out about other books as well.

Mod
Thanks Greg! good idea, Julia. sounds like a plan for September!

Julia wrote: "Paulina makes a good point--Laura, could everyone just choose a "banned book" for themselves and then we could all share our reactions? I'd be really interested to hear about more than one "banned ..."

Great compromise, Laura--that way we'll be able to have some good insights on WHY books are banned, especially based on the year(s) they were on the list.

They also have a page called "Top Ten Challenged Books Lists by Year: 2001-2013", so there certainly are plenty of choices out there!
http://www.ala.org/bbooks/frequentlyc...

This is the shirt I found online for Banned Books week, although I wear it other times as well :-) 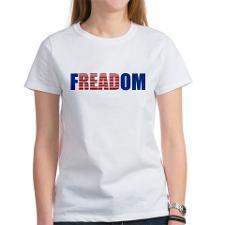 Mod
oh thank you, Julia! you are such a wealth of information!!

Some books on the list are very weird in terms of reason to be banned. Bridge to Terabithia, for instance, for occult/Satanism? I can't figure how someone managed to read that into it.

Mod
I agree, Greg. It is like people are looking for reasons to ban a book! if you look hard enough, you will find it!

Maybe it's those same people who find the face of Mary in potato chips? ;)

A decade-old toasted cheese sandwich said to bear an image of the Virgin Mary has sold on the eBay auction website for $28,000. An internet casino confirmed it had purchased the sandwich, saying it had become a "part of pop culture"."
http://news.bbc.co.uk/2/hi/americas/4... 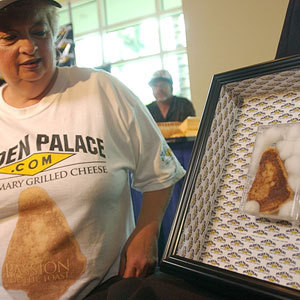 Pretty obvious that people see what they want to see, whether in toast or chips or banned books!

Mod
Polls are up! https://www.goodreads.com/poll/list/1...

Laura, it looks like you missed a couple of the nominations - July's People and Brave New World.

Mod
oooops thanks Greg! I fixed it now! good catch and thank you for letting me know :)

Great Laura - thanks for fixing it so quick :)