Alias (only for high ranks in guilds):

Guild: knights of the blood oath

History: Meka was a carer for her Nan for 5 years when her Nan suddenly died she wanted to escape reality she did but then she was locked in a death game

Personality: Meka is a kind girl who’d do anything for the ones she loved

Weapons: a red and black sword

Familiar (optional since not many people have them):

♬ ❀ ♕ || Moonlet Tiberias || Moonwatcher || Chara Dreemurr || ᏇℐℕTℰℛᏇᎯTℂℋℰℛ || * Humans are trash, especially me || ♕ ❀ ♬ wrote: "Approved but there are no Knights of the Blood Oath and could you add her level?"

Name (in game): Zander
Age: 17
Gender: Male
Sexuality: Pansexual
Alias : Light in shining Darkness
Guild: Knights of the New Order
Level: 27
Appearance: Dirty blonde hair that he keeps regularly shaven to only about an inch. He works out daily with a simple seven minute workout routine to keep his body lean and ready for his life. He often wears dark clothes because he feels at home in them. He doesn’t consider himself a goth but he does hang out with a few goths.
History: Zander grew up in the United States in the state of Arkansas. Though he grew up in the “Natural State” he tends to prefer to spend most of his time inside and in some video game chat room. While going thru elementary school Zander was picked on and made fun of for his love of video games. This drove him even farther into video games to the point that he went full antisocial and closing the world around him to almost everyone he didn’t consider worth his time. Due to being bullied for the first part of his life Zander adopted a high sense of honor and justice. He vowed to himself that he would never turn out like the people that picked on him. When he was fourteen he got his first real gaming system. Although it wasn’t anything modern it was better than his old computer. He quickly hopped into online games and began to have the most fun he had ever head. Unfortunately at the same time he let his grades slip and when he realized how bad it was he began to sink more and more into the online gaming community. Until one day when he was sixteen he got put into a challenge program and achieved his GED inside it. From that day forward he vowed to do better and he was trying his best. He put a lot of effort into getting a job and only gamed on the side as a stress reliever. Eventually he heard about SAO being the first fully immersive VR game on the market. He got so intrigued that he started to save up for a NerveGear. When he finally had enough he purchased one and waited for the game to be released for the public. Unfortunately he wasn’t picked for the Alpha or Beta testings but he was one of the first to buy the hard copy of the game and he quickly ran home to play the game he’d heard so much about. He logged in and quickly went around learning as much as he could. He was about to start his first quest when he remembered he’d have to wake up for work in the morning so he went to log out. That was when he found out that he was trapped.
Personality: Zander has a high sense of honor, justice, loyalty, and bravery to the point that he’s gotten in trouble for it. He believes that everyone deserves a chance and a second one if they really tried to fix their mistake. He’s the guy who’d rush in with the main force then retreat once the healers started to get attacked. He still believes in chivalry and makes it a way of life.
Weapons: One handed sword with a heavy shield
Equipment: Knight inspired medium armor
Skills and Stats:
Skills: Blocking, Attack, Speech, Barter, and Movement
Stats: 654
Familiar (optional since not many people have them): Black cat

He was a soldier in the Air force MP. Sent to Japan so can that work?

Until he would of been sent somewhere else yes.

But now he's a bit stuck. So he will probably wake up in Japan just like everyone else.

History: Yuki's story is rather simple. Her parents didn't want a baby, but it was to late to get an abortion, so when she was born, they abandoned her and placed her in an orphanage. She was bullied there and never made many friends. She had made one eventually, but she had cancer and died, leaving Yuki alone once again. After her friend died, she had a panic attack, most likely caused by her seperation anxiety, and was hospitalized for a few months. She got into VR games in hopes of escaping her everyday life. That is how she found SAO.


Personality: She's sweet, kind, gentle, and extremely energetic. She gets annoyed easily, but gets over it just as quickly. She has severe seperation anxiety, which is why she always has her familiar with her. She gets attached easily, so she mostly avoids speaking to people.

Weapons: She carries two swords, yet hardly uses them. She uses two daggers as her main weapon
Equipment: She refuses to wear armor, however, she does wear a white cloak
Skills: Cooking, Combat, agility, speed, and angering her target.
Stats: 556
Familiar (optional since not many people have them): A small white kitten. (Because cats are awesome and i can't have Yuki as a Neko.)

Sorry if it's a bit short, i'll elaborate on it later if need be. I gtg. 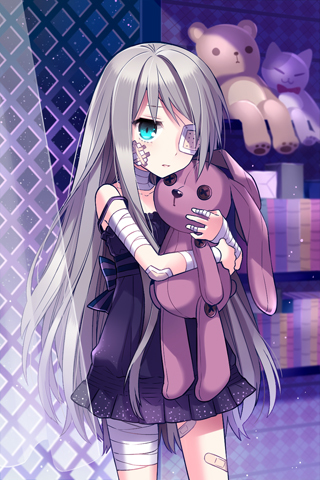 All her clothes are scarlet red, including the cloak she wears. She always wears these Scarlet red bunny ears as well, along with the eye patch in the given picture.

History: Ari's parents died while she was still fairly young. She and her elder sister were sent to live with their aunt and uncle. When Aria was 6, she was introduced to VR Games. She used the VR games as a way to escape her boring life. However, when she was 11, she got sick and her uncle came to pick her up from school. That's when the accident happened. Her uncle lost his life in the car crash and Ari lost her right eye. Ari had lost consciousness and was hospitalized for about a month before she woke up from her small coma. Incidentally, she had no memory of anyghing that happened the month of the crash. After Ari was released, Her elder sister, Katsumi, asked Ari to introduce her to VR. Ari and Katsumi played VR games together since then. Eventually they found themselves stuck In SAO.

Personality: Aria might look like an innocent loli, but she can be completely cruel time to time. She's generally sweet and still acts like a child. (Not the wild ones, but the calm sleepy ones) She refuses to sleep without her bunny, and hardly ever leaves her sisters side. Things like the Dark and monsters under the bed still terrify her.

Weapons: Ari has multiple daggers and a small light sword.
Equipment: Whenever she goes into the dungeon, she always wears this military like helmet and pretends to be An army general.
Skills: Agility, Speed, Sword fighting, and she's great at fighting bigger enemies. (Not really a skill but whatevs)
Stats: 613
Familiar (optional since not many people have them): A small red fethered dragon. (Like Silca's it can heal)

Thanks! I'll create her sister later: I gtg, ttyl 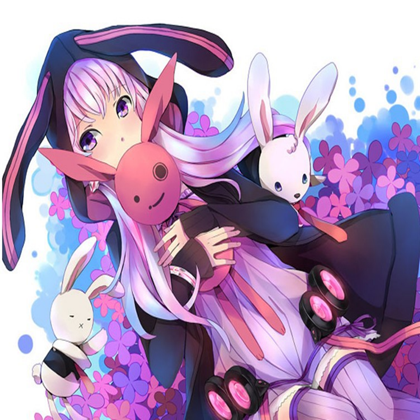 The outfit she's wearing is much like the one she wears in public. Except, much like her sister, her outfit consists of only one color, navy blue. Her outfit also consists of a witch hat (of course it has little bunny ear holes)

History: Katsu and Ari's parents died when they were really young, so they lived with their Aunt and Uncle. Katsu wasn't really interested in most things, but she did her best to act so she wouldn't worry them. One day, while Katsu was at school, she got a call from the hospital saying Ari was in the hospital and her uncle was dead. Katsu got permission to leave school and called a friend to pick her up. She rushed to the hospital to see her sister. Katsu would visit the hospital everyday, and sometimes would sleep there. Incidentally, she had no memory of anyghing that happened the month of the crash. After Ari was released, Katsumi, asked Ari to introduce her to VR, she thought because it was a way for Ari to escape reality, it might help her. Ari and Katsumi played VR games together since then. Eventually they found themselves stuck In SAO.
Personality: Katsu is extremely friendly and caring. She can be scary at times according to Ari, but no one ever believed it, mainly because Katsu only seems to get mad at Aria. Katsu's always smiling and it takes a lot to break her smile. Katsu is the more responsible one out of the two sisters and is always looking for a better outcome.
Weapons: A bow and a few knives, she also has a sword or two in her inventory, but she hardly uses it.
Equipment: She, much like her sister, wears a helmet when in dungeons, being her sister's second in command.
Skills: Agility, Speed, Great Aim, Cooking
Stats: 609
Familiar: A small black wolf (Tamed Monster) It's abilities are to heal and fight, however, like most Tamed monsters, it's stats are pretty low.
Quote: "A Witch always looks for the better outcome for herself."

Question: Were there guns in SAO? I don't really remember.

Oh you do that too?

Yuki~ "Sometimes you just have to learn to be brave and face your fears. And other times you just have to leave those fears be because they are there wrote: "Name (in game): Katsumi Navy
Age: 15
Gender: female
Sexuality: Straight.
Alias (only for high ranks in guilds): The Witch of the Crusades
Guild: The Fluffy Crusaders
Level: 30
Appearance: The outf..."