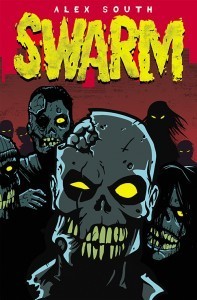 John has a dead-end job, doesn't see enough of his friends, and struggles to find meaning in his life. These everyday concerns vanish on the night he’s jerked awake by screams.

Frenzied figures roam the streets. A helpless onlooker, John tells himself that this isn't like the films. This is real life, with real people.

He and his neighbours band together over a small supply of food. Tensions brew, and a difficult choice arises. Risk starvation, or attempt escape? Conflicted over the cause and scope of the apocalypse, the group struggles to work together.

At first John clings to logic. The zombies do not drink or eat. Organic matter cannot sustain itself under these conditions, but things grow more complicated as the behaviour of the infected makes a drastic and inexplicable change.

I would like reviews on Goodreads and Amazon. Book link: http://www.amazon.com/Swarm-Zombie-Th...

I would love to read and review! If you could send a mobi file to tmb@tristaborgwardt.com I would appreciate it! Thank you!

I would love to read and review your book!
I would prefer the mobi format
My email address is gibsonmalissa@yahoo.com
Thank you!

i would like to R2R your book can you send me a pdf version of your book to michaelowen_jeffries@yahoo.co.uk

I would love to read and review your book Swarm. I love Zombie stories!My email address is amantedeborah@yahoo.com

Hi, Alex. I would love to review your book. My email is PrincessAreo1@gmail.com

Thanks guys :) I really appreciate it. I've sent 'Swarm' out to all the people above me. If it doesn't appear in your inbox let me know and I'll send it again.

Hi Alex,
I have finished reading Swarm and have posted my review! It is posted on Amazon, Goodreads and on my website http://tristaborgwardt.com/review-of-...

It was a great read! Thank you,
Trista

Hi Alex,
If you still have any copies to read and review would love to.

Thank you Trista :) It's great that you enjoyed it.

Yes Heather I still need more reviews. I will send you a pm.

I have accounts on here and Amazon. I would like to read and review your book if you need more reviews. Let me know. Need EPUB file if you can please. bbarr@hzelectric.com