Round 9 themes now closed, now taking new themes for Round 10. Please add your new themes nominations to the list on the other thread, thank you.

What gorgeous weather we're having currently! 'twas 22C degrees today, that the little tube of mercury was telling me, for my little part of sunny Wales. Me sister and bf, who'd been staying with us for the last couple of weeks, have now gone back home, so status quo has once again been resumed...hoorah! I love my sister, but visiting relatives, can stick around for too long sometimes! lol!

Got me pre op assessment date, for the 16th June, for my other eye....looks (pardon the pun!) like, I might get the second op booked before the summer break...so fingers crossed for that....as i'm useless atm. So bored of sitting around waiting for things to happen, especially with the fine weather we're getting atm. Hey ho..nothing for it, but to wait patiently.

Right...enuff waffling, it's Brass Neck turn, with his theme: -

'Toys, general or specified, in the title or artist's name'.

Nominations in by the usual time, Wednesday 10pm, thank you.

And...er...at the risk of sounding like a stuck record, cos I keep saying this....... have a wonderful, lovely, joyful, week! Summer is nearly here..woohoo! :)

Sorry folks... I put this one up a day early..cos I thought it was Sunday evening! Been a whirlwind of activity these last coupla weeks, with me sister & her BF visiting..i've kinda lost track of time atm!

But i'll leave this thread up, folks can nom from tonight, if folks wish to.

Right, first cab off the rank and I hope BN approves this ('cos I love it!)

The Life Is The Red Wagon - Jane Siberry

I'm easy (ooer) but could you elaborate on how this fits the toy angle please Val?

https://www.theguardian.com/music/201...
http://www.songfacts.com/category-son... (although how Rudolph the Red-Nosed Reindeer is a toy escapes me).

There are oodles of songs about merry go rounds or balloons which would be OK in my book and if you're really, really, really stuck there's always Barbie Girl.

Brass Neck wrote: "I'm easy (ooer) but could you elaborate on how this fits the toy angle please Val?" 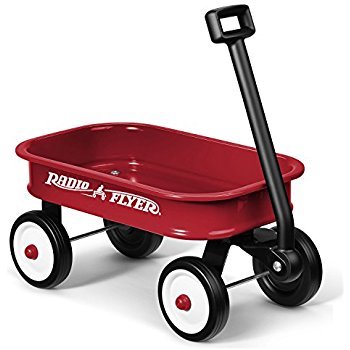 The lyrics are about a train wagon? I'd call the thing in the image a trolley maybe?

More evidence. The chorus is:

Happy to change BN but if Red Lorry Yellow Lorry is in then I think "red wagon" deserves a guernsey. I think these wagons are more of an American icon. I give you Willie Nelson's song:

Hold tight till we come to the hilltop
Going to coast down the hill, you and me
Won't you ride in my little red wagon
For you are my sweetheart to be

I read Jane Siberry's lyrics as being about taking turns, first I pull you then you pull me. I can't see "when the feet are dragging" being about a train wagon.

The term Toy could open up a whole can of the wriggly ones, cos..what about 'boy's toys', or ..dare I say it..sex toys! Okay..neither would be the kind of play things a wee kiddie ought be mucking around with...but as DIYer...I see toys in a completely different light...love using my power drivers & chop saws, and whilst many may consider them as tools..for me, I get a lot pleasure playing with them!!!!!! Even a ride on mower could be considered as a 'boy's toy' not that i'm discrediting women, cos I know one neighbour who's got one, and takes every opportunity to get it of her shed, and go for spin on it!!! :)

Bugger it, (almost) anything goes, it is about the music after all. Just awaiting 'adult' toys.

Watch out for other tricky ones - bikes? guns? bows and arrows? snakes and ladders? When is it a toy?

Don't you just love it when you put forward a theme that is quite clear in your head only to find other posters read all sorts of different things into it?

Val wrote: "Watch out for other tricky ones - bikes? guns? bows and arrows? snakes and ladders? When is it a toy?

Don't you just love it when you put forward a theme that is quite clear in your head only to f..."

Well..i ain't nominating Andy Kane's (Handy Andy from Changing Room) If I Had A 'ammer...nope.....rather... this nice number..

BN - are board games allowed?

That'd be better as a theme all on its own? Not what I was shooting for really Lez.

Brass Neck wrote: "That'd be better as a theme all on its own? Not what I was shooting for really Lez."

I thought so. It was only in case I got stuck!

I may be a wee bit late getting round to this tonight so I'll leave the playlist here and update later if necessary. Its looking good, some unusual noms in there, great stuff:

Okay doke..as Spacepig says, looks like a good one folks!

17 songs for your pleasure, giving us 5 votes apiece to spread as thinly as you can across all these lovely songs! :)

You can tell i'm a jovial mood tonight, and for absolutely no reason at all..i just am! :)

Many, many, thanks as ever to our most excellent playlist compiler Spacepig...but as you'll no doubt have noticed, Might take a wee while for Rob's nom to added...otherwise just click on his link till then:

Dunno how many of you have had a look on this week's FA round, but things have reached a bit of a crisis point with the thread, due to lack of support it's getting currently....& I'm afraid I went off on one in there as well, as I think something needs to be done to keep it going. FA is a marvellous thread, so it would be a shame to see it go. So, after the Coltrane voting has played out...anybody that would like to put their views across or suggestions as to how it can be improved, would be most welcomed to do so.

Right onwards with this thread...voting closes on Sunday 27th 10pm...and may this glorious sunshine we're getting (well..i am here anyway) continue! TTFN

Kicking off the voting ...

This playlist was much more my style.

Lots to like on this playlist & thus I found it very hard to pick my top 5. 10 songs merited points, and the remaining still listenable. So...in keeping with the current voting system rules, I've decided from now on, I'm going to list all the songs I like (my nom obviously not included - which I can't believe is as old as I am!), but just putting points to the top 5....so here's mine..

Uncle Acid & The Deadbeats - 5 (Easily wins hands down)
Tindersticks - 4 (Not heard of this band before)
Red Lorry Yellow Lorry - 3 (deserves more though, but I like the top two more)
Small Faces - 2 (Evergreen classic)
Admiral Fallow - 1 (Not normally given to folk music, but this is hard to not like)

And in no particular order:

The only two I wasn't taken by was SFAs (okay but not one of their better tracks) & Springsteen, which I don't like, as nearly all of his stuff has been a bit meh to me & ego driven! Born In The USA? Ach.... purlease! :-)