Hanna's section of the room/suite: 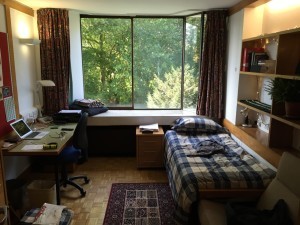 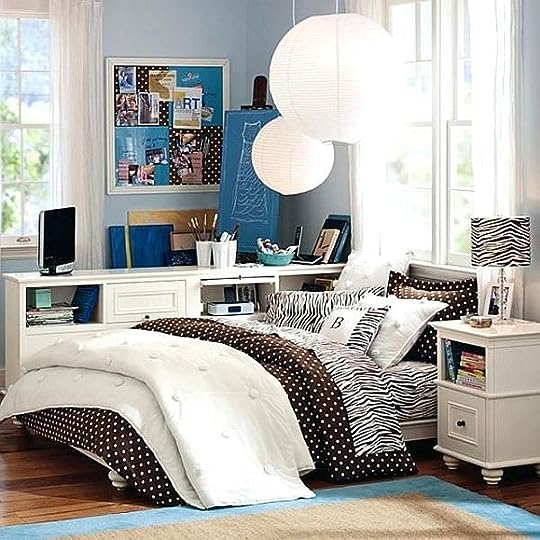 Basically this except the sheet and the lamp match this 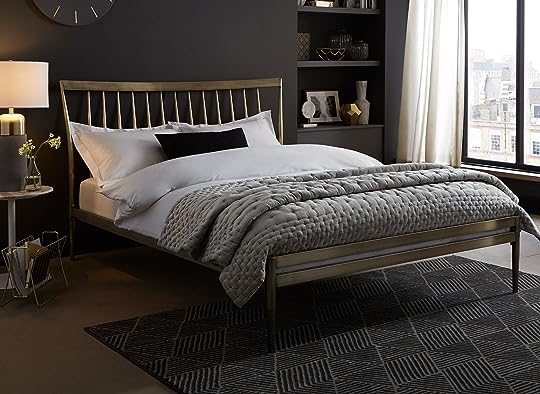 (backdating to maybe a month ago, Hanna's arrival to the academy)

Hanna spun her Oregon Ducks lanyard around her arm, looking over her barely-unpacked room. What was she even doing? She was only 16, and her parents were an ocean and a half away, while she was here being- maybe a god? ...The world was rull fuckt up. She let out a heavy sigh, kicking the largest of the cadre of cardboard boxes that had bravely made the trip, knowing it contained almost the entirety of her wardrobe.

She hadn’t even had a run-in with her roommate yet -- well, suitemate, really, with the wall that split their dorm into two bedrooms. She’d only been able to sneak a peek at the other girl’s room, and had winced at the- the decor. Hanna, on the other hand, was a simple soul. She had her old plaid comforter, no throw pillows, and her only “art” (if you could call it that) was an Oregon Ducks pennant and a couple posters she’d stick up once she’d gotten the rest figured out. No string lights, no inspirational quotes… It was boring. Was she boring?

She had no clue how long she would be here.

She had no clue how she could leave.

And she was 90% sure that someone was opening her suite door. 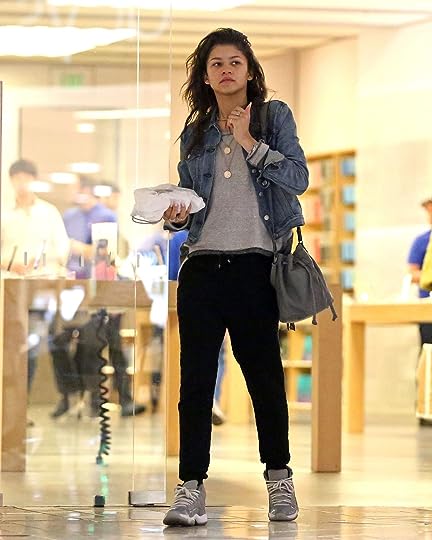 Alex fished for her keys as she approached the door to her room, being careful not to topple the carefully stacked textbooks in her other hand. She paused outside the door grinning in triumph as she finally wrapped her fingers around her keys. She carefully inserted the key into the slot and attempted to open the door; however it didn't budge. She twisted the key again and this time the door slid open. She carefully made her way inside, if this was someone's idea of a prank they were going to pay for it.

Nothing looked out of place from where she’d left it this morning; however she did notice that her door was fully closed when she could’ve sworn she’d left it open. Alex set her bag and books on the coffee table quietly waking over and opening her door. Nothing inside seemed to have been moved so that was good, she was starting to think she was crazy and that she’d left the room unlocked. Just to be sure there wasn’t anyone still in her dorm she’d check the other room just to be sure.

Alex pushed open the door taking in all of the new decor, eyes finally landing on a girl who couldn't be any older than seventeen, what a shame she'd been hoping her roommate would be someone older. "I'm sorry hun for bargin in unannounced. I wasn't aware there was anyone moving in today." She apologized taking another quick glance at the room. She noted the lack of personal touch; although that could be because she wasn't fully unpacked. "I'm Alex and if you hadn't already guessed I'm your roommate."

As she stopped her motion in sudden surprise, Hanna’s lanyard wrapped quickly around her wrist. “Oh.”

Oh? That’s all you have to say?

This school was… not what she’d expected. Not informing people of new arrivals, even if they’d be roommates? It made Hanna’s fingers twitch anxiously, feeling like an intruder, and she glanced to her hands. Admittedly, seeing her roommate dressed in normal clothes was kind of a relief. She’d been worried, based on the decor, that she was stuck with some ultra-femme girly-girl -- not that there was anything wrong with that, totally, freedom of expression and all that… But she was still glad to see the girl dressed casually.

Wait- “Alex?” She looked back to the girl, brow creasing. “I thought my roommate was named Catherine.” This school -- honestly, this school. She couldn’t figure it out.

Alex already thought her roommate was a bit odd, of course, she supposed she couldn't make any judgments. She didn't even know her name for God's sake it'd be unfair of her to pass judgment so soon. The poor girl was probably just anxious especially since she'd just barged in unannounced. It probably would've been a very different first encounter if the school had bothered to tell her someone was moving in; then Alex remembered something and it was as if a lightbulb flickered above her. She had a nasty habit of not reading emails she received from the school. It was entirely possible that they'd sent her an email and she just hadn't noticed. Well, she supposed that meant this awkward encounter was entirely her fault. She was just about to turn and leave the other girl to her own devices because it was obvious she didn't want to converse at this time.

"Oh, that's easy ta explain," She said, leaning against the door frame making herself comfortable as she could against the rough wood. "Not much to really tell ya, Catherine reminds me too much of home, so I go by Alex. Well, that and Catherine just sounds like a snob's name and I am not a snob." She laughed, hoping to put the other girl somewhat at ease with the situation they'd found themselves in. "Anyways, I've told you my name, so now I believe this is the point where you introduce yourself. At least I believe that's how things like this usually occur."

Hanna ran a finger over the temple of her glasses, steadying herself from the surprise, trying to remain nonchalant even as she looked the girl over again. The girl - Alex - looked so… poised. Older than Hanna by at least a few years. Her lips curved slightly in amusement at the ‘I am not a snob’— well yeah, no one would say they were a snob. But her own slight smugness at the comment helped Hanna relax a bit, lifting her chin.

“Yeah, that’s generally how introductions work,” she agreed with a slight smirk. “Hanna.” She held out a hand with renewed confidence.

Alex grinned, shaking Hanna's hand firmly, before withdrawing her hand. "Good, I swear some days you'll forget technology is even a thing around here. Most of the teachers are at least half a century old. If it wasn't for Athena and a couple other staff members, I swear we'd be using lanterns and candles instead of light bulbs or fountain pens instead of- well you get what I mean." She said with a small apologetic smile. She could sometimes get carried away with how behind the times some of these people could get. She swore when she rediscovered who she was; she wasn't going to have kids yelling at her because she didn't know how to enlarge a hologram.

Half a century was only fifty years, but Hanna stopped herself from pointing that out just in time. She was barely aware of her mouth popping open slightly just a moment later, eyebrows raised in surprise. “Athena like-” she shook her head, closing her eyes and nodding as she processed that information, her voice becoming sarcastic. “Obviously, right, of course.” Her shrug was a bit exaggerated. “Totally normal god stuff.” She huffed a laugh, almost scoffing as she turned back to her stuff, looking it over.

“So… what’s the deal? Do you guys have like… clubs? Or is it like, god-cliquey?” Hanna was still trying to figure out the whole system of the academy. The people who’d explained it hadn’t been particularly verbose. They’d left her feeling a whole lot of vague. Vaguely informed, vaguely excited, vaguely intimidated. And now she was feeling vaguely anxious. She’d gotten a weekly schedule, but then she’d gotten a list of non-general ed classes that seemed to cover an odd variety of subjects, and there was a lot of encouragement to go try new things -- which was cool and all, but hurghh. Social anxiety.