The Perks Of Being A Book Addict discussion

CONTEST OVER, Thanks for entering!

Oh, and check out my cover! 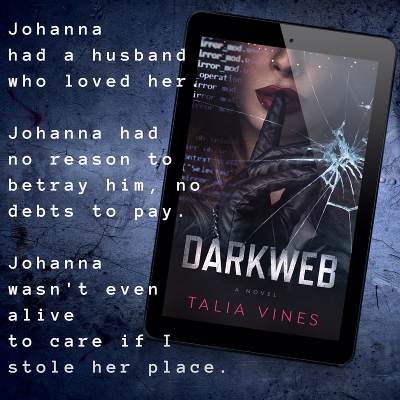 Someone’s framing her, everyone’s lying to her, and it all leads back to Johanna’s death.

Trauma survivor Wren Bower has learned the hard way that the only escape from pain is to feel nothing. But she has something the FBI needs— the perfect face to bring down Mark Donahue.

Mark’s the criminal mastermind behind DarkWeb, an underworld market rife with drugs, hitmen, and worse. His only vulnerability is the memory of his beloved deceased wife, Johanna.

All Wren has to do is run into Mark with her doppelganger looks, and let his haunted heart do the rest. In return, the FBI will release Wren’s brother from prison.

But Mark’s romantic obsession brings up emotions Wren has spent years suppressing. Soon Wren's caught in a dark temptation— slip out of her broken life and into Mark’s, or save her brother and betray Mark to the FBI.

She’s got to decide fast. Mark’s arrogant, infuriating, totally hot younger brother, Davis, suspects Wren’s up to no good… and he’ll go to any lengths to uncover her secrets.

And if you want to read a bit more, Cosmopolitan.com excerpted DarkWeb here.

Wow, sounds very intriguing! I'm not really one for suspense but this has surprisingly piqued my interest!

Ronnie wrote: "Wow, sounds very intriguing! I'm not really one for suspense but this has surprisingly piqued my interest!"

What a nice comment to leave! Thanks for making my day brighter!

The Perks Of Being A Book Addict