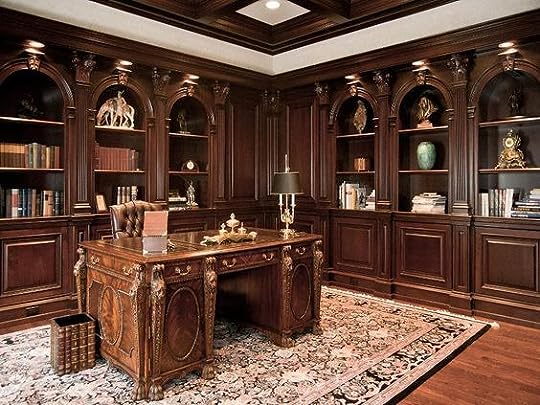 Cain's office serves as more than just the place where rebellion goes to die (or at least be temporarily quashed); the rich wood paneled walls hide doors to a private bathroom and bedroom, and despite having mandatory living quarters elsewhere on campus he ends up spending most of his time here.

It wasn't that the teachers at the academy were all awful. They weren't, really. There were one or two of them that she actually got along with. Navid was cool on occasion, when he wasn't drooling over her or talking about coasters. She'd met one or two of the council members and while they weren't despicable creatures from the bowels of hell, Oliver looked younger than she did and that made her uncomfortable, Vishnu was lovely but.. also made her feel uncomfortable. So meeting another primordial really just wasn't on her list of things that made her jump for joy.

Not that she had that kind of list just lying around somewhere.

He was on the security branch, and that was all she knew about him. Sure, she'd heard of Tartarus, she'd listened to stories and indulged firsthand accounts. But primordials were on a whole different level. She felt like a middleschooler meeting up with a college student to talk about quantum physics, apprehensive, uncertain and inexperienced in comparison. But that didn't stop her from holding her head high and walking with the grace of a wild gazelle on the golden pastoral plains of the Savannah.

Regardless of how she held herself though, she was in trouble. In short, she wasn't the greatest teacher. So she'd been sent here to notify Tartarus that it was now his responsibility to monitor her and teach her how to properly teach the students.

She approached the door and took a deep breath, inhaling, exhaling, doing so once more before reaching up and planting three firm knocks against the rich wood.

There was something impossibly relaxing about floating. Silence, darkness, returning to the womb of the abyss, his home, his being: one with the void. His body ceased to exist. His ears filled with the echo of endless water. All he felt was his own breath and the gentle embrace of the water on his skin. This room was surely the best addition he’d made to his quarters in the past four years.

He wasn’t entirely sure how long he’d been floating, but he had an alarm set to remind him of meals and had only soundproofed from the inside of his office door, so it should be easy enough--

What was that phrase? Speak of the devil and he shall appear…

With a heavy sigh, Cain shifted his legs under him again, rising to his feet as the heavily salinated water echoed its small splashes in the pitch-black room. Nudging his foot against the small set of stairs invisible in the darkness, he stepped up one, then another, reaching for the towel he knew hung on the back of the door. By now he had plenty of practice entering and exiting the sensory deprivation tank he’d built for himself, but the light that spilled in from the main office as he cracked the door - however dim it was with the curtains closed - still made him draw back -- but not before uttering a quick, “You may enter.”

He closed the door slightly again, eyes adjusting to the light even as it seemed swallowed up by the darkness around him. His mind was still in the water, drifting lazily as he slowly came to. He’d normally want to take a shower after floating… Maybe this knocker was just a message. Mail. He still wasn’t used to the whole computer concept, rarely checked his electronic mail if he could help it (and Athena gave him what was likely the proper amount of scorn for it). Perhaps he’d missed something important. Well, a quick message and then he’d take his much-needed rinsing.

Wrapping the towel around his waist to preserve some amount of modesty, he cracked the door a bit wider, taking one more step up until he was just inside the doorframe, glancing out.

Alice wasn't exactly keen on waiting. She wasn't a patient woman, and if she were being honest she'd also worked up a bit of anxiety on the way here. Primordials were capable of things she couldn't even imagine. Creating worlds, sewing together the fabric of reality without breaking a sweat.

But what she saw before her was a man. A very aesthetically pleasing man, near completely naked - which she figured wasn't exactly professional. Great. Wonderful start to this relationship. This was going to get complicated, she could tell. She could feel it brewing in the marrow of her bones, like a sixth sense ringing in her ears.

Man or not, he was dually, an anomaly, an enigma. Those were hard to come by these days. "..." her eyes were shadowed, two dark pupils flickering over what she could see, what she couldn't see. Now she was intrigued for more reasons than one.

"... For a primordial, you're not very timely" she commented, the corner of her lips curling into a smug smirk. "I was supposed to be here ten minutes ago, and you aren't even dressed." she pointed out.

Cain pushed a hand through wet hair, squeezing it to wring some of the water out as he looked over his visitor with a level gaze. “Not a messenger, then.” It wasn’t a question, more an observation. Based on her comment, he’d missed whatever message would have warned him of her arrival. Likely an electronic mail.

Glancing down, he took in his own state of undress. “Ah. I should probably change.” His voice was almost a disinterested murmur, excepting his perfect diction. Eyes flicked to the door on the opposite side of the office - the door to his bedroom, bathroom - and then down to his chest again, body still poised, still barely moving. Ideally, he would take a nice relaxing shower and have all the time he needed to return to the drudgery of life after floating. But apparently he had an appointment to keep. So instead, as one hand still held the towel at his waist and the other lazily rubbed at his jawline, he let out a sigh and plucked at his power for the briefest moment, drying his skin in seconds. Yes, it was simpler than the alternative, but there was something comforting to taking care of a human body in the typical manner.

Dry again, he returned his even stare to the woman who’d barged in on him, his mind gradually growing sharper. They’d met before, once or twice in passing -- Alex? His gaze moved past her to his desk, and he stepped out of the doorway, shutting it behind him, and gradually made his way to the black screened computer, stepping past his visitor - Ellis? - without acknowledging her presence.

Of course, the machine was off. He pressed the power button to begin it’s booting process before taking those few steps to his bedroom door -- Alice, that’s what it was. “So, Alice.” He didn’t raise his voice, and it seemed he didn’t need to, even as the door shut behind him, his voice still moving through the air like a chill, hanging there, almost physically present despite his distance. “Would you care to explain yourself?” His words were calm - almost detached - as he pulled on fresh clothes from his wardrobe, the message slithering perhaps under the door, perhaps through the keyhole, to blossom in the room on the other side.