Night of the Creeps

A few of my favourites:

An awesome lovecraftian flick and a great homage to John Carpenter's movies and to Lucio Fulci's masterwork: "The Beyond".

Night of the Creeps

Two that had an interesting premise, but fell short on execution:

An awesome lovecraftian flick and a great homage to John Carpenter's movies and to Lucio Fulci's masterwork: "The Beyond".

The Void was the first film that came to my mind. Superb Lovecraftian horror.

There is a really good creepy movie out there that I had rented from Netflix years ago and then I found it to buy at Walmart. It is called "100 Feet" - 2008 movie. Very creepy!

Also there are a couple of King movies that were made for tv that does not get mentioned much but they are creepy:

Also these movies listed below are good too:

Dr Terror’s House of Horrors is a great anthology film from the ‘60s with Christopher Lee, Peter Cushing and Donald Sutherland. It’s impossible to find on DVD unless you own a player capable of playing region 2 discs, though I do recall finding it on YouTube with Portuguese subtitles awhile back.

I take back it being impossible to find outside of region 2 - I just saw it’s available on Blu Ray.

Hausu is a favourite of mine. Very good surrealist horror film.

Three suggestions for movies that have depth beyond just the scare element. (I also agree with Carnival of Souls recommended by others).

Shutter (Thai, 2004, not the American remake) - A photographer and his girlfriend accidentally run over a young woman on a dark highway, then guiltily flee the scene. The dead woman begins to intrude into their lives, appearing first in photographs and gradually taking on a more corporeal presence.

Onibaba (Japanese, 1967) - During the 14th century civil wars that caused mass starvation, a woman and her daughter-in-law survive by selling the armor of wayward warriors lured by the women into a gaping pit.

Boys in the Trees ( Australian, 2017) - Two teens on the cusp of adulthood, estranged friends from childhood, reunite to test the bounds of loyalty. Their journey takes them into territory prowled by ghosts, beasts, and memory.

Jon wrote: "Onibaba (Japanese, 1967) - During the 14th century civil wars that caused mass starvation, a woman and her daughter-in-law survive by selling the armor of wayward warriors lured by the women into a gaping pit."

Good cal - I forgot about Onibaba, haven't seen it for a few years.

Thefiendfromdimensionx wrote: "Hausu is a favourite of mine. Very good surrealist horror film."

Isn't it! And very underseen.

I would also recomend anything by the Brothers Quay (Street of Crocodiles, The Unnamable Little Broom, In Absentia) or Jan Svankmajer (Alice, The Flat, Into The Cellar) if you like the works of Franz Kafka, surrealism, stop-motion animation, or experemental filmmaking.

The Void (mentioned earlier) is a neat homage to the era. The people behind it were also responsible for the (much less serious) Manborg, another 80s set film (although this time a homage to the campy action films of the era).

If, like me, you like "so bad it's good" films, I can recomend the astonishingly bad Blood Freak.

Some movies of lesser known that I plan on watching soon:

This might not count but "Rabbits" by david lynch is the only movie like experience that actually broke me. I couldn't feel normal for a few days after watching it.

They were obscure to me lol

A good lesser known horror movie is I Still See You starring Bella Thorne. I watched it the other day and it's really good.

Wow. Well...to set myself apart from the pack, I'll go with some disturbing French horror:

And a favorite American film of mine that literally no one else likes for some odd reason: Lovely Molly

Noroi by Koji Shiraishi - one of my favorite jhorror and found footage horror films of all time.

Ooh I been meaning to watch The Carnival of Lost Souls after seeing a poster of it on Pinterest.

This one is totally low budget (and it shows...), but it's the scariest haunted house movie I've ever seen: An American Ghost Story. I had to fast forward one part, and I've never done that before or since.

If you like eerie films, there's CURE by Kiyoshi Kurosawa. Not supernatural horror, but an eerie crime thriller.

My two favorites are Horror of Dracula (UK title - Dracula) and the first sequel Brides of Dracula. Both are tied for me with Nosferatu, which is more well known. They seem to be less well known than both the earlier films and the later ones, although I could be wrong.

Dated but still good, just watched Trilogy of Terror available on Amazon Prime. Based on stories by Richard Matheson and am currently reading The Best of Richard Matheson

Saw a few in the thread that I am going to see if available on the channels I have. Thanks.

I second Carnival of Souls (1962) -- spooky little ghost story with some nice effects for a low-budget movie of the time.

I also second The Leopard Man, one of the 1940s movies produced by Val Lewton; I also like The Body Snatcher (not Invasion of the ...; this is a different, period movie) and The Seventh Victim although it took a couple of viewings before I realized how good it was; it's like a precursor to Rosemary's Baby.

More recent, Don't Knock Twice -- not great, but well-done and well-acted. Better yet, The Autopsy of Jane Doe, with Brian Cox and Emile Hirsh, is about as tense and disturbing as you can get.

I liked The Autopsy of Jane Doe.

If you watch movies from Amazon video and like Horror/Comedy, this one is very different from the beaten path.

"When a modern-day alchemist develops a formula for synthetic blood, a group of traditionalist "Old Blood" vampires take a dangerous interest in the new artificial method of sustaining the undead."

Good music too. It's an indie so it's B-movie production quality, but that just adds to its charm.

I have to agree with 'Night of the Creeps'

Some others to consider:

'Heredity'
Seriously one of the most disturbing movies I've ever seen.

'Us' by Jordan Peele
Super creepy

'Drag Me to Hell'

Finally saw Carnival of Souls thought it was pretty good. Reminded me of The Twilight Zone.

Night of the Creeps is definitely a good lesser-known movie.

I think Dawn of the Dead is a bit obscure in the sense it doesn't get as good of credit.

I'm going through a Giallo films phase currently, they are just so atmospheric and stylish. Some recent ones I watched and enjoyed:

I just got so excited reading High Tension on that list! Favorite horror film, love it. Martyrs was also great, but definitely uhh.. ickier, haha.

Someone above also mentioned Hereditary? Definitely the most disturbing horror film I have seen in a while.

There are some great movies on this thread and a bunch I haven't heard of that I'll check out Here's a couple of my horror favs that less people know about.

The Midnight Meat Train (2008) is an adaption of one of the short stories from Clive Barker's Books of Blood. A New York photographer trying to capture "the real New York" finds himself caught up in killings taking place on the subway. Good stuff with young Bradley Cooper and Vinney Jones.

Vamp (1986) is a real guilty pleasure of mine. More of a horror comedy, but it's funny and moves really well. You have three 80s fraternity pledges visit an urban strip club where the owner and chief performer is vampiric Grace Jones.

Near Dark (1987) is another vampire movie, but is the first one I ever saw that took vampires out of the castles and made them a nomadic clan in the south. There's a bunch of familiar faces, but it seemed to get overshadowed by the Lost Boys.

Dead and Breakfast (just for grins)
Proteus (not sure the year, early 90's, its on YouTube)
Deep Rising (also on YouTube as Deep Deep Rising)
Autopsy of Jane Doe
Dead Silence
Below (a ghost story on a sub)
Carnosaur 2 (just because a velociraptor rips a person's arms off and I think everyone can appreciate that)
The Taking of Deborah Logan (creepiest possession film since Exorcist in my opinion)
Grave Encounters
Dread (2009)

I see lots of you have already said Autopsy of Jane Doe. One of my all time favorites. A few I didn't see...or maybe just missed:

Woooo i love horror movies and talking about them :) I just saw this thread and read all of your comments. I definitely agree with who said The midnight meat train (which I knew nothing about ever) and Lovely Molly as well, practically unknown. I actually have a video talking about some good movies free on TUBI, https://www.youtube.com/watch?v=wOZKC... including these too. But I have other videos about horror movies. I tried to find some lesser none ones.
I liked a lot Martyrs, I just saw it.
A new one always French which I loved is Teddy.
Someone even mentioned Dellamorte dellamore, definitely an obsure one, and it is ispired by Dylan Dog I think.
Maybe The taking of Deborah Logan is a lesser known one as well not bad at all.
Housebound is a fun one.
A classic horror story is a new horror italian movie (can you believe it?!) which wasn't bad for me at all.
But I could go oooon and oooooon :)

Climax, a French film about a dance troupe going to a secluded location for final preparations before performance. Not a traditional horror concept but it felt like horror to me.

Oh Climax was such a riiiiiiiide! So strange

Mod
The Ninth Gate (1999) one of my favorite movies, period. There was a year or two when I'd come home from work and put it on every single day to let me relax, and just watch it over and over, I wouldn't even watch the whole thing just pick up where I left from last and then restart the next day or day after that. My friends would make fun of me lol, oh whatcha watching, the devil movie again? It's so good tho, it's a very bookish movie too. 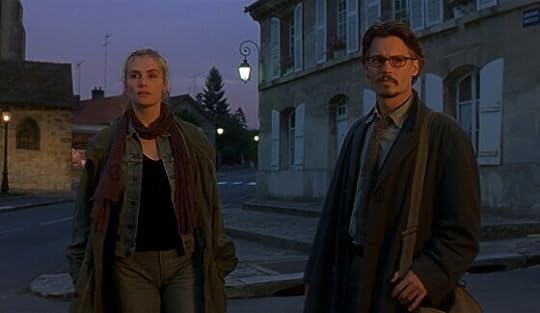 Monica wrote: "Oh Climax was such a riiiiiiiide! So strange"

It was a work of High Art with dance - treated as High Art - for a setting. My reservation was I'm not sure how I felt about the "monster" (view spoiler)[perhaps the LSD itself, perhaps the parts of us that can be unleashed by LSD (hide spoiler)].

Some random ones I'd recommend:

I'll probably have some more later, this is just what I can think of off hand. My preferences tend to lean towards older films, essentially low budget ones.