27 views
Movies & Television > The Predator franchise is back!

From the outer reaches of space to the small-town streets of suburbia, the hunt comes home in Shane Black’s explosive reinvention of the Predator series. Now, the universe’s most lethal hunters are stronger, smarter and deadlier than ever before, having genetically upgraded themselves with DNA from other species. When a young boy accidentally triggers their return to Earth, only a ragtag crew of ex-soldiers and a disgruntled science teacher can prevent the end of the human race.

Do you guys like the predator movies?
Did anyone read the movie tie-in books?

Huge Predator fan! I’ve read Predator: If It Bleeds.
But...
Why are they trying to turn it into a Marvel movie?
These movies should be dark action horror. This is daylight and kids. Will the Predator be on a cereal box? On a Happy Meal©?

Man Predator is one of my favorite movies of all time. Predator 2 is okay. The AVP movies I can't watch. Predators is all right. I'm so excited for this movie but so afraid it's going to suck.

Jake Busey is back? How about that.

Why has the kid got a box full of Alien gear?

Predator was a simple plot that was competently executed with a solid cast. When you add Arnold, in his prime, delivering dry one liners and Stan Winston's excellent work, you have cinematic gold. This was fueled by the 1980's movie market which fed straight into cable TV and all of our VCRs. Strange as it may sound, I watched more movies back when I had to go out and rent them, than I do now that I can stream anything at anytime. "There's the rub." It's easy to go bigger than the original, but it won't be better than I remember the original being.

The ultimate bottom line for me on this movie is that I'm going to end up seeing it, but I really don't have high hopes for it at all.

The trailer makes it look really good, I'd probably check it out when it comes out for rent.

Tim wrote: "The ultimate bottom line for me on this movie is that I'm going to end up seeing it, but I really don't have high hopes for it at all."

Tim, that reminds me of something I heard in a pub, in the early hours of the morning after all the good looking people had hooked up.

In fact, I think it might've been me who said it.

I saw this morning! Super excited for it! I hope they do a good job, it looks pretty decent at the very least! :) 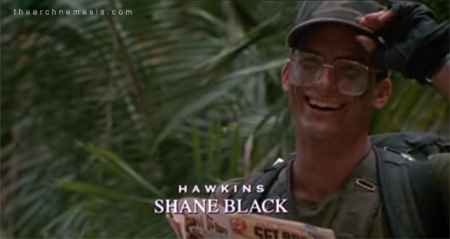 I had high hopes for this movie because director Shane Black was Hawkins in the first awesome Predator flick... after watching the trailer I'm just afraid this is another Iron Man 3 :/

It looks cool enough with all the action, but like a lot of other people said on here, there is nothing that can replace the original Predator. The first one was the best hands down, but then it had a great cast too. The other Predator movies to me were just so-so. I wasn't too impressed with any of them. I always loved the original, so nothing else could compare to what I knew first. :)

The original had great tension as the Special Forces team were (despite their best and careful efforts) hunted down one by one, and Arnold and the other actors had the charisma, physical presence and skills to carry off their roles to perfection.

I think one of the key flaws in the follow-on films is a lack of pivotal characters to really care about. We're left with shallow stereotypes, like "The Angry Cop," "The Wise-Cracking Cop," The Cold & Ruthless Government Operative," etc.

In contrast to PREDATOR - ALIENS is as good as, if not better than ALIEN precisely because Ripley is motivated on multiple levels. She wants the truth to be known, to clear her name. She wants to save the child because she's compassionate, and she specifically, wants to save "Newt," to redeem the deeply personal loss of her own daughter. She has both personal (save Newt, clear her name) and impersonal (save the child, leave no-one behind) goals that are 'noble goods,' that are easily recognized goods for most people and we relate to them as such.

Then she is thrust into a personal confrontation against great odds vs the "big bad," Alien Queen while under the ticking time bomb of the ruptured fusion reactor core...

Great character with depth and nuance and heaps of resonance with the audience, and great dramatic plot structure, and all completely absent in the follow-on Predator films.

Predator: If It Bleeds (other topics)