Must not this be Virgil's (and Aristophanes') ''Easy is the descent to Hell"? This is to be a real journey into the beyond, to be taken literally.

we need not worry about the discrepancy which some feel between those passages which seem to speak of going "down" to the underworld and the so- called normal Homeric view that Hades' house is beyond the stream of Ocean (10.508; 11.155-59).

DOWN
Surely Odysseus's question here to Kirke implies that going down to the underworld is normal and crossing Ocean to get there is not? He himself says that nobody has ever yet done it by ship. Homer and his characters think of the dead as being burned and then buried in a tomb heaped over with earth.

Penelope therefore speaks of dying as going beneath the earth (20.81), and the dead are depicted as hidden in, or held by, the earth at least seven more times in the Odyssey.

Even Antikleia in the underworld, who remarks that her son must have crossed many rivers, including Ocean, to get there (11.157-58), says, as Odysseus does to Elpenor, "How did you come beneath the dark air?" (11.57).

The dead are in the dark, beneath the earth but more, they are not even in this world, for were we to reopen their tombs and look for them, we would find only their bones.

As Antikleia puts it, their ghosts ( psukhai ), all that is left of their real selves, have "flown away like a dream.''

To follow them out of this world, Odysseus must sail across its boundary, Ocean; furthermore, he must sail beyond the light of the sun, for it looks on the dead no longer, nor they on it. Hence he must reach the land of the Kimmerians, which "Helios never looks on with his rays'' (11.1516).

When he has done so, he will find himself "down" in the House of Hades, as he himself regards it (11.164; 23.252). Hades'house is "down" because the dead are buried "beneath the earth"; it is beyond Ocean and the sun's track because the psukhal of the dead have "flown away," out of this world which Ocean bounds and the sun looks on.

For purposes of storytelling the two conceptions are harmonious, however inharmonious they may be from the point of view of practical action. If there is any difficulty about the geometry of this, we can infer that for Homer the world is spherical, but I do not think he or his audience bothered about it.

For them, for purposes of description at least, the world of dreams and shades was contiguous with the waking one, but to ask whether horizontally or vertically contiguous would be as irrelevant as asking whether a thought comes to one from the east or the west. Again, as we did in the case of the "easy" way to the underworld, we come up against the difference between the Homeric attitude and our own toward the world of what for us are mental events. Our way of thinking perhaps distinguishes more clearly and consciously between that realm and the physical, but our appreciation tends to suffer in consequence as mental events become more and more a figment, something we willfully create rather than a part of our environment. We must never forget that for Homer a thought or a dream is just as real as smoke or a shadow, and they all exist in the same world.

Mod
If geometry really does not apply to Homer's world of the dead, why does Kirke specify a north wind as the one to take Odysseus there?

Probably because, for an Aegean Homer, that was the wind to take you, as according to Nestor it did Menelaos, "into a sea so vast that not even the birds return/out of it in the same year, for it is great and terrible" (3.321-22). It will be remembered that Menelaos had been driven beyond Crete, and Nestor's description implies that some of Homer's audience at least did not realize that the Mediterranean was landlocked on the south. A traveled Greek's general feeling would be "land to the north and east and west, sea to the south." If he wanted to sail beyond the Ocean Stream, that would be the way to go. Second, though the land, too, might be unknown, it never seemed as indefinite, dangerous, and uncanny as the sea. Thus the southern sea is the place for the Hider, Kalypso, for the bulk of Odysseus's adventures (for he too was blown south), and above all for the way to the land of the dead.

Kirke's description of the scenery and topography of Hades' realm is equally appropriate. For Homer's audience and all who accept the world of the imagination, "the shelving shore and Persephone's groves,/the tall poplars, and willows which lose their fruit unripe" (10.509-10)these as well as "Hades'dank dwelling" (10.512) are perfectly real and satisfactory.

So too is the spot which Odysseus must seek out. There into Grief Flood flow Fireblast River and Wailing Stream, which comes from Loathing Water; a rock stands at the confluence of those two loud rivers; there, good hero, approach as close as you can. (10.513-16) In Greek these waters are of course Acheron, Pyriphlegethon, Kokytos, and Styx, respectively, but we must not let too much familiarity with "mythology" dull our ears to what their names suggest and to their appropriateness in the land of the dead.

Acheron must remind us of the akhos ("grief") we would feel when the kokutos * ("wailing") went up all around the corpse of a comrade as the "fire blazed" about it ( puri phlegethon; Iliad 23.197 of the burning of Patroklos's pyre: ophra tachista puri phlegethoiato nekroi ).

Styx ("hate'') will recall not so much the enmity we feel for our human enemies who killed the man whose corpse now lies on the pyre as it does the loathing and dread which disease, old age, and particularly corpses of the dead characteristically inspire, for such is the Homeric use of the related words stugein and stugeros .

In short, the underworld landscape is marked by streams and lakes whose names and relationships reflect the feelings and actions of the living in the presence of death and the dead.

Kirke tells Odysseus that he must turn the throat-cut sheep "toward Erebos, but turn away yourself/setting your heart on the streams of the river" (10.528-29). Kirke's instruction means, as similar ritual prescriptions to "turn away" probably also do,

"Dissociate yourself from what is happening; do not let yourself flow away to the dead along with the sheep's blood. Keep your grip on life.''

Erebos then seems to be the ''Dark Place," from which the dead will come, while "the river" is simply the one that separates the dead from the living, which Odysseus aims to recross, in this case the Ocean Stream (10.508).

Mod
An interesting depiction from a different source (Numen 56-2009, 185–197 The So-called Hell and Sinners in the Odyssey and Homeric Cosmology by Nannó Marinatos) 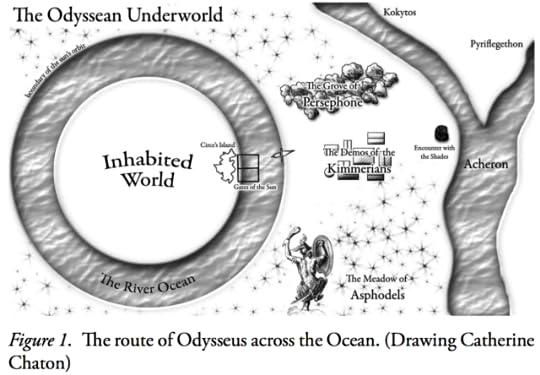 The author argues that Odysseus does not descend into Hades.

Odysseus is told to go to Hades by Circe in Book 10 of the Odyssey. The instructions he receives show clearly that this journey will not involve a descent to the underworld, but rather a crossing of the cosmic river Ocean; Hades lies on the other side. This is confirmed in the Iliad when Patroclus tells Achilles that because he is not buried he is prevented from crossing the river and entering Hades (Il. 23.73)

Mod
Brief comment on Hades from Hymn to Demeter

“Blessed is the one of all the people on the earth
who has seen these mysteries.
But whoever is not initiated into the rites,
whoever has no part in them,
that person never shares the same fate when he dies
and goes down to the gloom and darkness below.”

What if you’re initiated but unburied? (Elpenor, eaten shipmates…)