Here is the second of our May writing prompts--a mysterious young man drinking his refreshing water. Let your thoughts fly on this one and please keep it YA--what is his story??? Remember to mark the end of your writing with either The End or 4 ####. 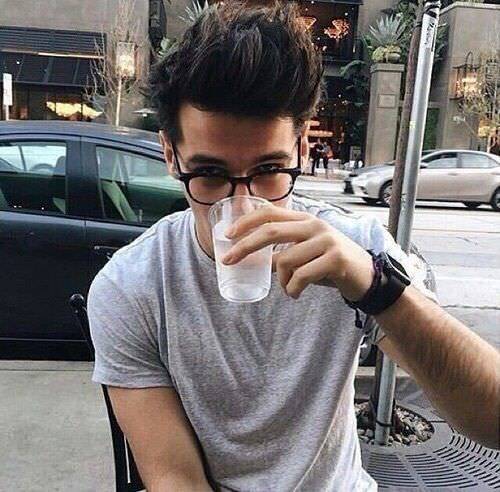 I was around the plaza with a couple of my friends, recording our new video on youtube!
I nearly didn't notice him, until a girl from my group pointed at him. I knew we had the chance to talk to him, since he already paid attention to us, as we were fooling around with the camera.
Thank God he was sitting alone. I offered the chair opposite of him to my girlfriend and I took another chair from the table next to him.
We both started asking him irrelevant questions, pretending it was about our video, but soon we got into flirting zone. At first, he believed that this was a prank, that's why he is laughing, but later we (me and my girl friend) both gave him our facebook profiles. The third guy (friend) stopped recording with our camera and got away from this small chat. So, the stranger confessed that he was bi and he liked the two of us the same. Finally we left, telling him that he can think about it and then, send a message to one of the two he prefers the most.

Harry!! What a unique take on this pic! Thank you for sharing!

Sammy Goode wrote: "Harry!! What a unique take on this pic! Thank you for sharing!"

Harry wrote: "I was around the plaza with a couple of my friends, recording our new video on youtube!
..."

That's a fun version. I wonder who he chose. :) Thanks for writing.

Blink of an Eye

Across the café table from him, Nick was taking a sip from his glass. Except…he wasn't. He held the glass to his lips, unnaturally still. His hair was lifted like a breeze caught it, but not a strand moved. He didn't blink, didn't twitch. His eyes seemed to stare through Jack, seeing nothing.

Is he breathing? Jack reached out, then realized that there was no motion on the street behind Nick either. Cars on the road stood frozen heading toward a yellow light that didn't change to red. Even a sparrow under the next table was caught in place, little beak aimed at a dropped french fry a centimeter away, never reaching it.

"Help?" He whirled and jumped to his feet, knocking his chair over. The crash echoed loudly against the hush of the voiceless, engineless, silent diorama. "Somebody! Help!" At the other tables, no one moved. The servers just stood, caught in motion, staring straight ahead. The one guy had a foot raised, a heavy tray of glassed poised on his shoulder. Why doesn't he fall? Jack stared but the guy remained poised, not even a muscle twitching.

Jack twisted his hands together, not sure what to do. If he shook someone, would they fall and break? If he ran for help, would they be here when he found it. Am I crazy? Is the world ending? He glanced up at the sky, for just a second imagining that the heavens might actually open and suck people up like a heavenly vacuum cleaner. The clouds hung motionless in a bright summer sky. Nothing happened.

"Turn around slowly," said a deep voice behind him.

He whirled frantically. "They're frozen! Nothing's moving! Help!" He lunged toward the man, hands outstretched. The guy danced back out of range with more grace than you'd expect from someone that big.

"Stop!" The man waved an odd silver handgun at him. "Right there. Freeze!"

Jack slowly raised his hands. "But—" He couldn't even finish the thought. But— everything.

The man tipped his mouth slightly toward his collar. "ID check stat."

As soon as he was done speaking, a woman appeared at his shoulder. Just not there, and then there, somehow expanding from a thin line to a person in the blink of an eye. Jack blinked harder, as she waved a device over him.

"Not the target," she said. "Resister. Four generations."

"Goat turds. No time to pursue that." The man raised his gun.

Jack held out a hand, as if that might stop whatever was coming. "Don't!"

The woman's gaze suddenly snapped left. "Target. There!" She leaped toward the road.

A sizzle of light from the silver gun caught Jack as he spun to watch her. It haloed around him, tinging the scene with painful, eye-piercing, fractal brilliance, expanding outward, outward, as the center went dark. Blackness blotted out her running figure, the parked car, the street, the sky. The world went dark.

Something hard was pressing against Jack's hip, and something warm was touching his face. He blinked bleary eyes and the scrolled iron leg of a patio chair resolved into view. Beyond it, a sparrow pecked at a french fry. The hard thing under him was pavement. A gentle hand brushed his hair away from his eyes and he rolled over to meet Nick's worried gaze.

"Are you okay?" Nick touched his forehead. "Did you hit your head?"

Did I? He wasn't sure. It ached, but with a buzz like a freaky, fading migraine, not like a bruise. "I don't think so." He sat up, glad of Nick's arm around him. "What happened?"

"You don't remember?" Nick hugged him tighter. "You were going to show me volcano videos and then you just…collapsed, I guess. So fast I didn't even see you fall."

"Fall." He didn't remember. Why did he think he'd gotten up, had been standing, over there—? He looked around the café. A few people nearby were eyeing him with worry and curiosity. The rest ate and drank and talked and scrolled on their phones. A tall waiter set a loaded tray of drinks neatly on a table He didn't drop them. Why did I think he might?

"We've been together a year. You think I wouldn't tell you?" Jack shook off Nick's arm and pulled himself to his feet with a grip on the chair.

"Hey, just asking." Nick hovered at his elbow, dark eyes concerned behind those sexy nerd glasses. "You freaked me out. I was worried."

"Sorry," Jack tugged his T-shirt straight. "Hey, I didn't even spill my soda." He sat down cautiously, but the wave of headache was receding. He felt surprisingly normal. "I'm okay" He took a long swallow of diluted Coke, crunching an ice cube to give himself time to think. What happened? He'd never passed out before, or had a fit. Of course, there had to be a first time, but he felt fine. And why did he remember Nick, sitting like a statue, glass frozen at his lips? A flash of memory gave him a woman running toward the street, haloed in white. A big dark man. "Not the target."

"Did I say anything? When I fell?"

"It happened so fast. One minute you were on your phone, then you were on the ground. You were coming around by the time I got there, though." Nick pulled his chair around closer and sat. "Do you want to go to the ER? Or a doctor?"

"You fell over. That's not normal. You should get checked out, babe." Nick laid a hand on his arm.

"I'm fine. Maybe it was the video. Like, some people get seizures from swirly gifs, and flashing text." He reached for his phone, where it sat on the table. Oddly far from his seat, on the opposite side. "Did I punt this across the table when I fell?"

Nick frowned. "I didn't see you do anything,"

"Hm." He thumbed the screen, entered the code. But instead of the volcano search, it opened to phone calls. With last call highlighted. 911. His fingers trembled as he stared at it. "Hey, what do you see?" He tilted the phone toward Nick.

"You called 911? Did you have, like, an aura? I know this kid who has seizures and she can tell when they're coming on."

At least he sees it too. "I don't remember doing that." He almost wanted to call 911, to see if it would ring and ring. But all around him, people talked and cars honked and the odds were, the operator would ask "What's your emergency?" "I'm going crazy?"

"I think you should go get looked at," Nick said. "Come on, let me pay and I'll bring the car."

"Seriously, I'm fine." …silver gun, flash of white… "But sure, let's head home. I can walk to the car though. If it happens again, I'll see a doc. If not…" Nick was just as much of a nerd as he was, with added brilliance as the cherry on top. "If not, I'm going to tell you an interesting story." Maybe Nick wouldn't believe him, maybe he shouldn't, maybe it was all a migraine hallucination. But he felt a little shiver of excitement go down his spine. What had the woman said? Resister, four generations? "After we nap and, er, things, we might go see my gramps. And maybe do a little research on line." He bumped Nick's shoulder with his own as they stood up, feeling a sudden rush of love and gratitude for the solid boyfriend he'd somehow landed, without really deserving him. "Hey, data-boy, what do you know about tracking down genealogy?"

Kaje wrote: "Blink of an Eye

Really cool take on this, Kaje!

Harry wrote: "I was around the plaza with a couple of my friends, recording our new video on youtube!
I nearly didn't notice him, until a girl from my group pointed at him. I knew we had the chance to talk to hi..."

That was cute! I'd like to think he 'chose' both!

Kaje wrote: "Blink of an Eye