In the first of our two prompts that tied for first place this month is this lovely gem. What are these two gentlemen doing? Prom? Special Night? Let your plot bunnies dance and give us a few words about these two magical men. As always keep it YA and if using more than one text box remember to mark the end of your writing with either four #### of The End. 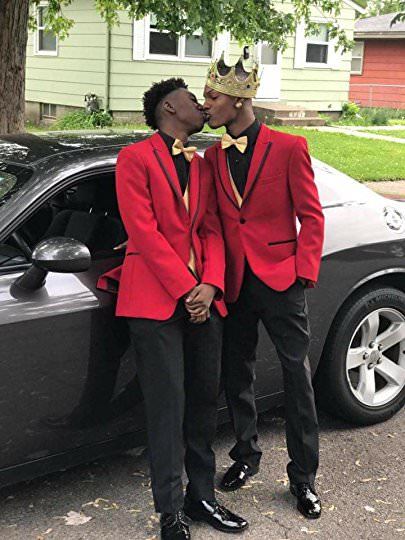 It is pretty obvious that those two guys were taking part in a gay pride, but it's not that simple. The local lgbt organization chose them as candidates for the Gay King Prize! Each candidate will be presented on a chariot alongside to a queen (lesbian), a priest (bi) and a mage (trans) and a small army. Brand and Jax are kissing each other before they split and head to their teams, while Jax is trying on the winning crown! Brand is a little worried about leaving his boyfriend alone, but after all, where could he go? They must be present on their throne :)
Who do you think is going to win ?

<3 that's a great scenario. Thanks, Harry.

See that guy out there? That's my big brother. Not by blood, because his mom and dad adopted me when I was ten, but still, my brother.

I kind of wish I was his big brother, yanno? 'Cause he caught a lot of shit for being gay all though school. I'm four years younger and you could call me a skinny runt, so there wasn't much I could do about the bullies. This is the first year we were even in the same building. I videoed them on my phone once, but he wouldn't let me show anyone else. He said it'd just make things worse. So freaking unfair!

Now look at him. That's his boyfriend, Michael, in the crown. Michael's not as fierce as Vic but he's cool, and when Vic put the crown on his head he just grinned and straightened it. I bet he'll wear it to prom, too, if Vic wants him to. Head high, 'cause they don't ever bend to people who try to shut them down. Everything those guys got, they worked for. Fought for, paid for.

I hope tonight is brilliant for them. I bet they walk into prom like a pair of kings and dance like they own the floor. I wish I could see it.

Is it bad that I'm also scared, just a bit? Dad sometimes says the nail that sticks up the highest gets hammered. And man, Vic sticks up real high. They'll be walking out of that prom through the school parking lot, and going out around town all night, and then back to school for two more weeks. And after they graduate, well, the real world isn't a picnic. Sometimes the proud and the scared inside me get so mixed together I can't breathe.

Not gonna think about that now. I'm just taking a picture. Looking at them kissing. Remembering this moment, when they're together and in love and the world is at their shiny-shoed feet. That guy there? He's my amazing big brother.

I would love to have a brother like him ^_^
Nice story, brilliant thoughts!

If I wanted to make my dad crazy, I'd post a picture on his facebook of me and my girlfriend kissing, or maybe the two of us when we went to Pride with rainbow face paint. I'd post it first thing in the morning, when he went to work, so it'd be up there for a whole day, and Aunt May would see it, and Gramps, and probably his fishing buddy Gordie. Before he could take it down, I'd be out and he'd have to stop saying that I couldn't because it would make Aunt May have a heart attack and Pastor Shawn would kick us out of church which would mean no Bible study for my little brother this summer, and oh, wouldn't that be a shame?

I hate how he says it's okay to be a lesbian but if I show it, then somehow it's this family disaster sledding downhill to a crash with blood and guts all over the road. Why can't he see the blood and guts leaking out of me when he says that?

I know his passwords. Five months I've been out to him and he hasn't even put one word of support out there where it really counts. Not actual support and no, I don't consider him posting gently on Aunt May's rant to tell her that gay men are not all pedophiles the same as support, because duh, that should be obvious, and if she's that far down the tubes to Crazyville then there's not much point in considering her feelings. Why does my life have to consider her feelings? Yeah, she helped us out when Mom was sick, but that shouldn't give her lifetime rights to sit on my chest and beat the air out of me with her Bible.

I go looking for pictures on Facebook, 'cause I'm not there a lot but wow, those're cool pics of queer couples at prom. Maybe I'll post one of those. Not my own face - that way he could say he was hacked, but he'd still see the crazy reactions and the way there's no hope of "just wait a bit" and "let them adapt to change" because Pastor Shawn would come in waving Leviticus like an old, dead club to bash me with, and Gordie will be gagging on spoons behind him and that'll show that sometimes you have to cut people loose.

I see the best one yet. Two guys and they're black and kissing and one is wearing a gold crown and they're happy and just there. There in all their queer glory and certainty and not-giving-a-shitness, like I want to be, will be, me and Leandra, next year. All the things people hate and I don't know why they hate, and it would pull down the perfect storm. And I'm not sure why there are tears running down my face as I hover over the "post" button.

Maybe it's just that they look so sure in that moment, and it's about love and I shouldn't use it like a weapon in my fight. Maybe it has to be my picture or none, because otherwise I'm taking someone else's courage and borrowing it for my own fight. Look at those guys. Imagine renting matching red jackets and gold bowties, probably going to the store together, chins up, eyes bold, trying things on and joking around in front of the mirrors, determined not to see if anyone in the store is making a face at their happiness. Imagine walking into their prom together, as a couple, in their outest moment yet, maybe dancing together, of course, dancing together. I can't use that.

Gordie posted a late birthday greeting for Dad, with stuff about best wishes for great fishing. His birthday was last week, what a loser, but at least he remembered. There's not a whole ton of birthday wises as I scroll down, and none that actually say stuff like Gordie's.

Dad has to do it.

Before I close out of Facebook, I download and print the picture of the two guys kissing. I don't know why that one because there were lots of great girl kisses too, but maybe it's the confidence. I print it and then shut down the computer but I write on it "Imagine two girls, better fashion, same general effect. That's me, next year, and it's going to get posted everywhere. If you want to be ahead of the curve, it's time to get into the game, and start standing up. I can show you where the rainbow emojis are."

I lay the picture on the keyboard and shut the laptop. Maybe it won't change anything, maybe Dad will be willing to talk. But as I get ready to go out for the day, I carry that image with me like a talisman. In a world that can have a hundred comments applauding those guys, no matter how many against, there will be room for me. I bet Leandra would love a top hat.

Mika wrote: "If I wanted to make my dad crazy, I'd post a picture on his facebook of me and my girlfriend kissing, or maybe the two of us when we went to Pride with rainbow face paint. I'd post it first thing i..."

Don't know how I missed seeing this, but thanks for writing for us <3