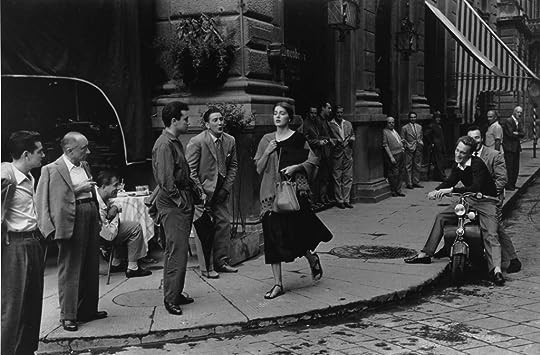 Ninalee Allen Craig in Ruth Orkin’s photograph “American Girl in Italy,” shot in Florence in 1951. “This image has been interpreted in a sinister way,” Craig said, "but it was quite the opposite. They were having fun, and so was I.”

"On an August morning in 1951, two American women met for the first time in the corridor of the Hotel Berchielli in Florence.

Ninalee Allen, who was known as Jinx, was a vacationing nursery-school teacher. Ruth Orkin was a freelance photojournalist who, after chatting with Ms. Allen, asked if would she would pose for a photo essay about women traveling alone.

Jinx agreed, and they set off on what Jinx called a “photographic lark.” As they came to the Piazza della Repubblica, 15 men were loitering. Some were leaning on a wall. Two sat on a motor scooter. Nearly all were staring at the 6-foot-tall Ms. Allen. One leered and grabbed his crotch.

Ms. Orkin snapped Ms. Allen twice walking that testosterone-charged gantlet. The first time, Ms. Orkin told The New York Times in 1979, Ms. Allen “clutched at herself and looked terribly frightened.”
“I told her to walk by the second time, ‘as if it’s killing you but you’re going to make it,’ ” she said.

The final shot, “American Girl in Italy,” captured Ms. Allen with her head tilted slightly up, her eyes cast a bit down and her right hand holding onto her sweater. For the rest of her life she insisted that she had been enjoying herself and had not felt harassed. Indeed, she said, she had imagined herself as Beatrice in Dante’s “The Divine Comedy,” striding past the men with dignity, refusing them her glance."

"Both women insisted that they had come upon the men at the piazza serendipitously, and that nothing had been posed."


See the image much larger here:

This photograph deserves amply to be considered a masterpiece. Unfortunately, Ruth never equalled it again.