James Kennaway's THE MIND BENDERS (1963) is a weird novel in the best kind of way. Part Cold War espionage story, part psychedelic horror, it was the basis for a cult classic film starring Dirk Bogarde. The story opens with a Nobel Prize-winning physicist committing suicide by throwing himself from a fast-moving train: why did he do it? British Intelligence thinks he was passing secrets to the Communists, but his colleague believes his death is connected to bizarre experiments using an isolation tank for sensory deprivation. To find out the truth, he'll have to repeat the terrifying experiment on himself, with horrifying consequences.... Kennaway's compelling and harrowing tale returns to print for the first time in decades, with a new intro by Paul Gallagher and cover art by M.S. Corley. 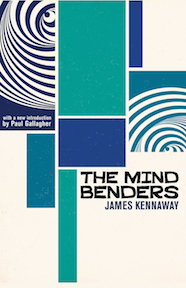 For more on this book and author, visit our website:

This sounds great! And I love the cover art.

The Mind Benders (other topics)