The anthology begins with some short fiction by Chen Qiufan. The opening one, "The Year of the Rat," involves assorted young Chinese soldiers in the battle against rats. The walking rats on two legs happened from an experiment in genetic modification and evolved with hitherto unsuspected capabilities. References to politics, trade, class, empathy for struggling life or lack of it give rise to characters' situations, beliefs, and actions.

I found this anthology very interesting. As usual (and I'm a little embarrassed that I always do this) I'll start by posting my review of the book.

Invisible Planets, as the subtitle indicates, is an anthology, translated by Ken Liu, of recent Chinese science/speculative fiction (from the People's Republic, not Taiwan or the Chinese diaspora). This anthology consists of thirteen stories by seven authors, and three very short essays at the end on Chinese science fiction.

I used to read (mainly American) science fiction in my teens and twenties, but I haven't read more than a handful of speculative fiction books since then, so I'm no longer much of an expert on the genre as it is today, and can't really say what is different about Chinese and American speculative fiction except in a sort of impressionistic way. One point of convergence seems to be that there is a blending of science fiction with fantasy in several of the stories, but only one or two that I would classify more as fantasy than science fiction. The essays at the end say that Chinese science fiction in the Maoist era was mainly for encouraging an interest in science in teenagers -- which I don't think is necessarily a bad thing; I remember reading some Soviet science fiction novels which had real equations (not just for show, but necessary to understand for the story), and they were good well-written stories which actually challenged the reader. The current trend, if this book is at all representative, and the essays are accurate, is more like the Western "new wave" tradition of literary science fiction with a skepticism of technology. The stories are almost all somewhat dystopian, although unlike American YA dystopias they are high-tech societies run by bureaucracies rather than low-tech post-Apocalyptic societies run by vampires and zombies, which are thankfully absent from all of these examples. (Although the two stories which are closest to fantasy are somewhat exceptions.) Perhaps the high-tech bureaucratic societies are a reflection of what China is becoming, just as the vampires and zombies are a reflection of modern America.

Nearly all of the stories are good, as you would expect in a very selective anthology which is made up mostly of award-winning stories; as in any anthology, I had my favorites. The two best, in my opinion, were Ma Boyong's "The City of Silence", a story explicitly based on Orwell's 1984 (which figures in the text), and Hao Jingfang's "Folding Beijing", both of which feature bureaucratic control through technology. The title story "Invisible Planets" is also by Hao Jingfang but is more like the parables in some of Stanislaw Lem's short stories; although not mentioned in any of the essays I think he may be an influence on some of the stories, but perhaps that's because he's one of the few authors I've read in the recent past.

I very much enjoyed Xia Jia's "Tongtong's Summer," a short story about a young girl's relationship with her octogenarian grandfather and their socially beneficial involvement with the robotic invention named 'telepresence.'

The same author's "Night Journey of the Dragon-Horse" featured an immense statue of a watery mist-breathing horse with dragon scales and human speech and consciousness, which comes to life after the collapse of human society. The living consists of numerous whirring insects and a talkative bat who recites lines from the Chinese poet Hai Zi (1964-1989), "With Dreams as Horses." The complete poem in a slightly different translation is at wushengli's space.

The bat intones some lines from that poem. One is the recurring Like all poets who make dreams their horses. In the blog, it's written as the same as any poet who rides dream as horse. The bat speaks another excerpt, too, from Zi: Faced with the great river, I am consumed by shame. What has my exhaustion accomplished...?, or in wushengli's space I feel shameful when confronted with the big river. I waste my youth, left with a body of exhaustion.

An unknown Chinese artist's drawing of the mythical Dragon-Horse 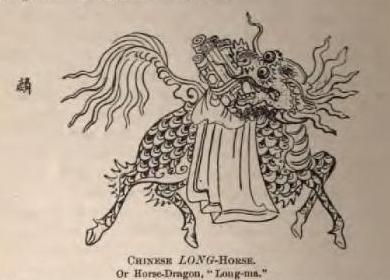 So what might the symbolism be about the crumbling, stepping metal statue from Nantes, France, through the empty city? The ending continues to evade physical reality with the metamorphosis of the dragon-horse.

James wrote: "...The current trend [...] is more like the Western "new wave" tradition of literary science fiction with a skepticism of technology...."

James wrote: "...The two best, in my opinion, were Ma Boyong's "The City of Silence", a story explicitly based on Orwell's 1984 (which figures in the text), and Hao Jingfang's "Folding Beijing"..."

Like you, I admired Ma Boyong's story "The City of Silence." It portrayed ways in which characters coped in repressive, technologically advanced societies where language and emotional associations increasingly became forbidden.

Fantasy Faction digests each story of this anthology in an abstract.

Hao Jingfang talks about her science fiction story "Folding Beijing" to the BBC.

Photo of the author by Deux Plus Quatre.

How inventive. A city mechanically turns its area inside out to accommodate its waking and sleeping populations in alternation to the day and night. I like the heroics of Lao Dao with his adoption of Tangtang, then starts on the perilous quest to the opposite, forbidden part of the city so he could afford to educate her. His humble profession, possibly jeopardized by robots, belies his true mettle.

The title of the short story "Call Girl" by Tang Fei, translated by Ken Liu, misleads the reader. It begins realistically in a kitchen at breakfast with Mom then at school amid mostly catty students. Unique about the girl student is a dog whistle necklace, the likely inspiration for creative storytelling. She wanders off, entering a waiting automobile. Its three-dimensional interior slowly changes through a collage of more vast environments in a fantasy extending beyond conventional space, time, and experience.

More about this particular story as it relates to other of her works as well as about her varied life and interests occurs in "The Spurred Storyteller," an interview in Clarkesworld magazine.

Cheng Jingbo's short story, "Grave of the Fireflies," takes its setting in February of an unknown year. The 'entropy' of a universe sends inhabitants fleeing towards a place which still has light. Lois Tilton in Locus Magazine summarizes this fantasy as follows:

"The stars are going out. Refugees pour through a stargate to the promise of salvation in the Weightless City, while on the road, Rosamund is born to their queen, with a clear recollection of the event. When they reach their destination, the queen disappears into the castle of the Weightless City’s creator, and Rosamund follows her there, where eventually she discovers the secret of the dying stars."

And, Jon C in The Encyclopedia of Science Fiction states that the story

"has prolonged exercise in poetic Fabulation, a Far Future tale of impossibly advanced humans fleeing the heat death of the universe (see Entropy), delighting in the likelihood that seemingly everyday words and concepts have mutated so far in meaning across the Time Abyss that separates the reader, that one might as well be reading a Magic Realist fairy tale."

Kate Baker does a lovely reading on Clarkesworld audio podcast MP3; that magazine published the first English translation of it in January 2014.

Liu Cixin's short story "The Circle" about a mathematically-minded 'Chinese assassin' has historical precedent in the life of Jing Ke as well as having derived from part of his famous novel The Three-Body Problem (2007).

Many creative endeavors credit that piece of literature as the wellspring of their origins, as 'derivative works' from that first volume of his trilogy. We'll be reading it following the current Invisible Planets.

If you thought that the concept of eternity meant for all time, then Liu Cixin's short story "Taking Care of God" will tell you otherwise. That span is but a pinpoint in this fictional, expanding universe eventually on the way to contraction. The advanced God civilization from outer space long ago seeded earth with elemental life forms like bacteria and algae. Now in its thousands-years senescence and being too comfortable in the 'Machine Cradle' to know how to fix the technology of aging spaceships to maintain the lightspeed, millions of Gods drift down from the sky for earth's families to care for them as is done for aged parents. From that vast out there, the plot turns on the experience of one God in one family, as typical of the visitors' boarding situations. Gods' lifespans, how that highly advanced civilization travels through space-time, and God's romantic quest for reunion with a female God on an exploration into the farthest reaches combines science and imagination. Liu likens the bittersweet relationship, kept alive by live tv image and distorted by time at the speed of light, to the classic Chinese legend Butterfly Lovers.

Three brief essays from some of the represented authors end this anthology of science fiction. I didn't know that when I purchased the sci-fi anthology from Whitcoulls books and stationery shop in Dunedin, NZ, (the town made famous for me in Eleanor Catton's The Luminaries ). In the first essay, Liu Cixin notes the historical changes in the content of Chinese science fiction and the former dismissiveness toward the once-banned genre during the 1980s. He introduces the ironic, literary sensation of his 'Three-Body' trilogy. Entirely coincidentally, The World Literature's next reading is that trio of novels, one of which won a Nebula Award for Best Novel.

Chen Qiufan's essay "The Torn Generation" in part speaks about his novel Waste Tide , soon to published in English translation, which textually illustrates his experience with the human and environmental costs of 'e-waste recycling' for other countries in a town near his childhood home. Elsewhere in the essay, he says that writing science fiction enables him to express possibilities for China's better future, i.e., for ameliorating the disheartening disorientation of rapid transformation and extreme competition.

I found this interesting in that the main occupation in "Folding Beijing"was also recycling and was also threatened by automation. I can't really imagine an American sf writer taking up this theme. I may look for this when it comes out in English.

I just noticed on Amazon that it is already available in the Kindle edition. There wasn't any indication when or if a printed version will be out. I'd rather get it through the library if possible, but if not I'll buy it for my Kindle, it's only 14 dollars.

James wrote: "I just noticed on Amazon that it is already available Sorry, I misread it; it's coming out in April of next year, not last April, and it now has a print version for the same date.

James wrote: "...the main occupation in "Folding Beijing" was also recycling and was also threatened by automation..."

Wouldn't automation of the main character's job in that toxic industry boost his health? Alongside that trend to downsize, China recently banned importing other countries' recyclables to convert into exports because that industry introduced contaminants into the natural environment. How America and elsewhere resolve the new predicament ceded to them could affect their societies and literature.
https://www.mnn.com/lifestyle/recycli...

James, there are some English-translated formats of 荒潮 [The Waste Tide] for next April, according to Amazon.