I'm going to fess up that I had never heard of Stuart Heritage before Mark's recommendation. Turns out he's a TV critic for The Guardian, amongst other things.

Anyway, I can already confidently state that this is worthy of its own thread, despite not being remotely Hamiltonian.

Stuart Heritage got where he is today by being decent, thoughtful, hardworking and kind. He is, in short, a model citizen. The favourite son.

His younger brother Pete is quick-tempered, peevish and aggressively pig-headed and, for a while, known to his friends as 'Shagger'.

But now, Stu has returned to his hometown to discover that Pete has taken his place. Practical and resourceful where Stu is not, Pete has become a shoulder to lean on. He is now undoubtedly the better son. And all at once Pete and Stu have to reevaluate their fraternal dynamic. It should be easy, but it isn't. Because, well ... Pete's a dick.

Don’t Be A Dick, Pete is Stuart Heritage’s unconventional and laugh-out-loud biography of his brother. It is a hilarious examination of home and family; sons, fathers, fatherhood, sibling relationships and how hard it is to move on in a system that’s loaded with several decades of preconceived ideas about you. 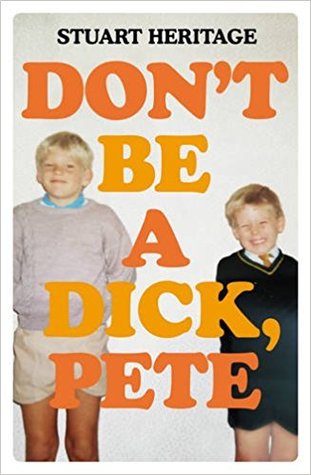 'Don't Be a Dick Pete' by Stuart Heritage

Mod
Nigeyb wrote: "A massive doff of the cap to Mark for this top tip

Nigeyb wrote: "A massive doff of the cap to GoodReads amigo Mark for his strong recommendation that I read 'Don't Be a Dick Pete' by Stuart Heritage"

'Don't Be a Dick Pete' by Stuart Heritage

Don't Be a Dick, Pete (other topics)