Mod
The Yearling is the 1938 novel written by Marjorie Kinnan Rawlings. It was published in March 1938 It was the number one best seller for twenty-three consecutive weeks, as well as being the best-selling novel in America.

Young Jody Baxter lives with his parents, Ora and Ezra "Penny" Baxter, in the animal-filled central Florida backwoods in the 1870s. His parents had six other children prior to Jody, but they died in infancy which makes it difficult for Ma Baxter to bond with him. Jody loves the outdoors and loves his family. He has wanted a pet for as long as he can remember, yet his mother, Ora, says that they barely have enough food to feed themselves, let alone a pet.

Join me in reading The Yearling, about a boy who adopts an orphaned fawn, the novel won a Pulitzer Prize for fiction in 1939.

Mod
I have seen The Yearling (1946) film that stars Gregory Peck and Jane Wyman many times but I have never taken a moment to read the book.

I hope you can join me, anyone in?

Mod
Happy to have you Kayla! Hope you find an edition soon!

I'm in! I'm about a quarter of the way through.

Mod
I hope you are enjoying Margaret!

Mod
The Yearling has a vast amount of detailed descriptions for the scenery and even the food! Making it easy for me to visualize the story. 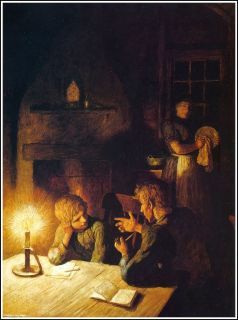 Lesle wrote: "The Yearling has a vast amount of detailed descriptions for the scenery and even the food! Making it easy for me to visualize the story."

When I read it several years ago, I enjoyed visualizing the almost island-like, but inland, backwoods setting for the story. I then watched both the movie version and also the 1983 movie of Rawlings' memoir, Cross Creek, which confirmed the visuals.
Cross Creek tells the story of Rawlings' life when she buys and moves to an orange grove in backcountry central Florida. I especially enjoyed the parts detailing her relationship with editor Max Perkins. The movie came out 2 years before the film of an author's similar memoir, Out of Africa.

Mod
I enjoyed the movie Cross Creek because it had good scenery, a good story and two of my favourite actors from that time.

My then-girlfriend, now-wife and I really loved going to the theater in 1979 to see the movie Time After Time, with Malcolm McDowell as the time-traveling H.G. Wells. Mary Steenburgen and McDowell met making that film and had great on-screen chemistry, and also off-screen.
Four years later and now a married couple (didn't last), it was Steenburgen's turn to play the author, portraying Marjorie Kinnan Rawlings, with McDowell in the small role as Maxwell Perkins.
Sorry to digress, but it brings up fond memories.

Poor Julie! felt awful for her, she took the brunt of the bear fight.

Pa's gun misfiring did not help much.

Jody is a loving kid but dutiful too!

Mod
Chapter 9
I cannot imagine trying to stay busy so you do not think about how hungry one is. He asked his father why he chose this land. Hardly any water available makes it a hard life. Penny stated it was the peace the area provided.

Jody often wishes for a pet. Wonders often if a young wild animal could make a good pet. 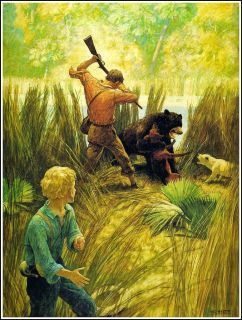 Mod
Chapter 11:
Jody and Penny go off to go fishing and discover something beautiful after Jody caught a whopper of a fish.

Penny seems to struggle with taking the side of his son and keeping things away from Ma that might get Jody in trouble. So he just does what he needs to (chores) to keep peace.

Mod
It's all about women!

Penny teases Jody about a girl, Eulalie (the name alone made me giggle). Jody is so mad about being teased he throws a potato at her! Penny ask why and the lesson?

"Well, son, you cain't go thru life chunkin' things at all the ugly women you meet"

They drop in on Grandma Hutto with a gift from hunting and she treats them so much better than even Jody's Mom that he wishes she was his real Grandma.

Mod
While out looking for their missing hogs, Penny is bitten by a snake. Seeing a Doe, Penny takes its life and uses the liver to draw out the poison.
Unknown at first the Doe has a Fawn.

Jody does his fathers chores while trying to figure how he can raise the fawn that his mother saved his father's life.

I understand the struggle that Jody is going through, He wants something of his own, to raise and take care of. Nothing any other boy raised on a farm desires. Usually, a dog is the first thing offered for learning responsibility, but that would be something else for the family to feed. With life being so rough and hard a wild animal as a choice means that the woods provide.

The fawn follows Jody everywhere he goes, which is exactly what a lonely boy needs.

The farm life for the family is hard work to just put food on the table, than a wicked storm devastates the crops and even the wildlife in the woods.

Flag (Fawn) is growing and is never far from Jody. Flag gets himself in serious trouble with the family and Jody takes it hard.

Flag and Jody spend time in the woods carefree and enjoying the runs they take together. Jody is not lonely any longer.

Old Slewfoot causes the family and their means of living a huge loss when he takes a calf. Penny makes the decision to hunt the bear down. This bear has caused Penny's mood to change drastically. Finally revenge is done. The family spends Christmas with Grandma and when they leave to return to the farm, life is quieter.

Now that Flag is a yearling Jody worries about him even more, giving him stern warnings about behaving and staying out of the crops, but it fails and Flag eats the entire crop of corn. Jody has to replant the field on his own and try to keep Flag in a fenced area that he must build. Even his mother starts to take pity on him and helps Jody build the fence even higher, To no avail. Now Jody is left with the worst punishment ever. It is Flag or the families winter food.

Jody leaves the family, finds himself lonely once again and starving. Jody feels the family is better off without him but soon realizes that is not true. He returns home and decides he needs to be a man and suffers the loss of his love of Flag.