10 views
Other worldviews and beliefs > Are all faiths Exclusive?

Mod
Are all faiths exclusive? Many assume only Christianity is. But...

I suppose any statement of belief could be considered exclusive. For instance, saying that faith in Jesus Christ is the only way to the Father is an exclusivist statement/belief. It is likewise an exclusivist statement that there is no God or that all forms of matter are sinful. Any truth statement, regardless if the evidence backs it up, in itself is a statement of exclusivity. This is true, that is false. This faith is true, all others faiths are false or fall short in some way.

Mod
Well said. If there is truth - there is non-truth. Fun eh!

Ah, now we have situational truth, a cousin of situational ethics. Glad I'm in a scientific field (genetics) where "truth" at this point in time is pretty solid. Of course, future discoveries may invalidate some of it. As Rod has pointed out, many scientific fields, especially ecology and environmental biology are fraught with political correctness which is the opposite of seeking truth.

Rod - as I related to you, I stayed on the "other" board to at least hold the moderator's feet to the fire concerning extreme right-wing "Christianity". He has taken to deleting my posts. Guess his "truth" withers under assault, too. Christianity is solid if Christ isn't hijacked for fringe agendas. Unfortunately, in most modern sects, that is the norm.

Can't we all just 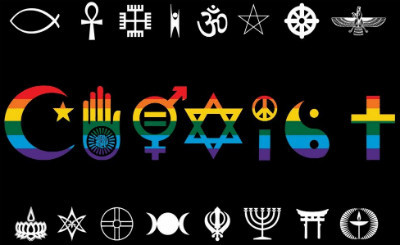 Chris - everyone here is a servant of Jesus. That doesn't mean all is well with the present day observance of Christianity - far from it. if we cannot honestly discuss issues among we believers, how will we ever respond to dissembling secularists. Here is the place to air your misgivings among the faithful, consolidate your worldview, then go out like lambs and spread the message to the wolves, but at least you'll be forewarned and forearmed.

Many people ponder the question, "Why can't religions coexist peacefully?" The short answer is because the various religions are competing with one another for the hearts and souls of men; another way to put it, all faiths are exclusive. The very nature of religious belief is exclusive, because each religion makes claims about truth that are at odds with the claims of other religions.

Every religion addresses these basic questions: Where did man come from, and why is he here? Is there life after death? Is there a God, and how can we know him? These questions help frame one's worldview, the foundational philosophy of how one deals with life. When two people have different answers to these questions, there is bound to be conflict of some sort. This conflict can range from a friendly disagreement to a life-and-death battle, depending on the people involved. Since there are hundreds of different religions in the world, and millions of people framing their worldview, it is easy to see how things can escalate.

Typically, when the question "why can't religions coexist" is asked, the focus is on the historic struggles among Christianity, Judaism, and Islam, although other religions are often included. Sometimes, a contrast is drawn between the pacifism of Eastern mysticism and the violence of traditional monotheism (Christianity, Judaism, Islam), though violence and extremism can also be found among the mystic religions. A brief look at history will confirm that every religion has its extremists and carries its share of blame for violence. An important question to ask is whether the bloodshed can be attributed to a religion's essential teachings, or if it comes from a twisted application of those beliefs.

One word can sum up the reason why religions cannot coexist peacefully: sin. Because sin affects all men, the tendency to fight can rise up even in religious contexts. While different religions may have similar positive benefits to society, all religions are not equal. Only Christianity addresses the sin problem by changing the heart of man. "If anyone is in Christ, the new creation has come: The old has gone, the new is here!" (2 Corinthians 5:17).

But... are ALL faiths exclusive? I would say definitively, yes. Even if you subscribe to a belief that "What's true for you may not be true for me," you are making a statement of faith that excludes people that see things differently. Even for atheists who say there is no God, that is a statement of faith. And anytime you make a statement of faith, you are excluding those who do not agree with you.

Mod
Whichever religion lives in fear of being displaced--- should seriously ponder its deity.

I don't fear for the future of Christianity at all. It's when it prospers that I get nervous. The bible warns us how this is going to play out.

Chad - if I say "I have faith that Capitalism is the best economic system", I'm not excluding anyone. A black marketer is engaging in a form of Capitalism (the supply and demand side, but neglecting to pay taxes), but probably doesn't consider himself one. Many small business owners on their social justice side prefer socialism. A Communist still buys clothes from WalMart. You're only exclusionary if you ban someone, otherwise they have a way of worming their way in and being (usually) a disruptive influence!