30 views
Book Discussions (general) > Onward and Upward in the Garden, by Katherine White

Mod
Onward and Upward in the Garden 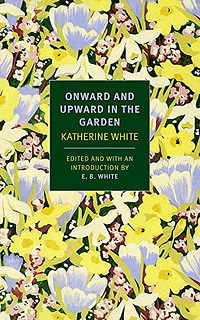 In 1925, Harold Ross hired Katharine Sergeant Angell as a manuscript reader for The New Yorker. Within months she became the magazine’s first fiction editor, discovering and championing the work of Vladimir Nabokov, John Updike, James Thurber, Marianne Moore, and her husband-to-be, E. B. White, among others. After years of cultivating fiction, she set her sights on a new genre: garden writing. On March 1, 1958, The New Yorker ran a column entitled “Onward and Upward in the Garden,” a critical review of garden catalogs, in which White extolled the writings of “seedmen and nurserymen,” those unsung authors who produced her “favorite reading matter.” Thirteen more columns followed, exploring the history and literature of gardens, flower arranging, herbalists, and developments in gardening. Two years after her death in 1977, E. B. White collected and published the series, with a fond introduction. The result is this sharp-eyed appreciation of the green world of growing things, of the aesthetic pleasures of gardens and garden writing, and of the dreams that gardens inspire.

Mod
This comes out tomorrow, so I'm moving it over now. Let me just say that it is charming and perfect for the oncoming spring.

Trevor wrote: "This comes out tomorrow, so I'm moving it over now. Let me just say that it is charming and perfect for the oncoming spring."

That's good to hear, as I'm pretty keen on this one! Thanks Trevor.

Yes, it can join her husband on our shelves. I love the cover.

One of the things I learned from this book is that in the 17th century, all the New England white pines whose trunks measured 24 inches or more were marked as Crown property and were cut and transported to England to be used as ships' masts, which is why pine boards wider than 23 inches are rarely found in early New England houses.

Also that lawnmowers (for very large lawns) used to be pulled by horses. Which seems logical, but it's one of those things you rarely think about.

Most of the chapters are about seed catalogs, though.

Most of the chapters are about seed catalogs, though

I still thought they were fascinating because they often touch on the personalities of those behind the seed catalogs, extolling the passion that instills even these writers with creativity. That was my favorite aspect of the book, actually.

Trevor wrote: "Most of the chapters are about seed catalogs, though
I still thought they were fascinating because they often touch on the personalities of those behind the seed catalogs, extolling the passion tha..."

Yes, I've heard some mixed reviews about the whole seed catalogue aspect. I'm intrigued by the idea of someone managing to write whole columns about that, though, so hopefully I will have the same response as you, Trevor. I guess we'll see!

I love flowers, seeds, and gardening, so whole chapters about seeds and seed catalogs are certainly not inherently offputting to me. I could sit here and page through a Burpee catalog without getting bored, no problem.

However there is something about her underlying tone which I found a little offputting. At one point she describes some enormous dahlias she grew one year, the size of dinner plates, which embarrassed her because "the only word for them was vulgar." Perhaps she is the only person on earth who would be embarrassed by the vulgarity of a flower. As if it were a leopard print miniskirt or a Hummer with goldplated hubcaps or something.