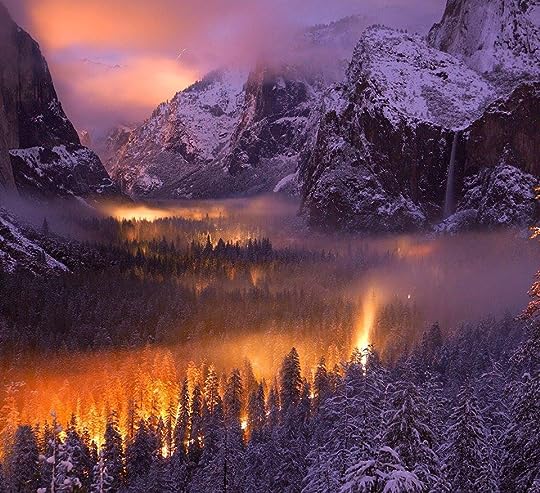 Mod
(I'll post first if u want, I will be using calla my werewolf )

Mod
calla sniffed the ground, then snorted having snow being blast into her snout was not fun. Swishing her tail back and forth she ran and dove right into a snow bank, creating from one of the many tall evergreen tree's. She layed their and watched the snow fall silently down. Taking a calming breath, she shifted. Once into human form calla ran her hands over the snow. She watched as the snow melted into nothing, one of the perks of being a werewolf was you where never cold. Turning to watch the sky , calla open her mouth and stuck her tongue out to ketch some snow flakes.

Mod
calla sniffed the air, something smelt off. almost diffrent, twisting around so she was on her stomache in the snow she looked for the smell.

Mod
'What is that smell' calla though to herself . A cold breeze lifted her dirty blonde hair off her shoulders, sniffing she caught the smell again, ' fairy' she thought . Jumping to her feet she started making her way to the direction it came from. Moving between the tree's just incase she needed a fast escape, she couldn't be to careful, ren loved playing tricks on her. As she walked the smell was getting stronger

Mod
Yep definitely fairy' calla thought as she grew closer to the smell she noticed a small body shivering, instantly she was anxious what was a fairy doing all the way over here
"Hey!, are you alright,"?

Mod
Called raised her eye brow
"Calla" she responded , this fairy was in the wrong place, calla had no idea why she would be way out in the cold, calla racked her brain wasn't fairy in warm weather not cold.

Mod
Calla watched the little fairy , she felt a swell of something inside her . Maybe it was because the little fairy was the first person she had seen since she ran from Ren and the pack.
"You know you should be jumping on the tree tops , not walking on the floor of the forest, their is many things there that would see you as dinner"

Mod
Calla looked around and cringed the little fairs voice took on a raising edge
" could you try not screaming" calla told the girl
"You are walking the wrong way the water fall is that way" pointing behind herself , calla shook her head their was no way she would leave this poor girl alone, she could easily become food to vampires, that hunted out here. Calla was used to the vampire she knew they we're their before they new she was .
"Come on I'll help you home" calla felt a strange tug at the corner of her lips, she was smiling she realized , and it felt strange to her

Mod
She stiffened, calla had never heard anyone say that to her before,
"Uh. Thanks" she replied weakly, calla was lost for words
"So" calla started "why on the moon would u go on by yourself you are very young"

Mod
" I don't have a pack" " wait no, we'll it's a long story" calla whispered she could feel the little fairy eyes on her

Mod
Haha she is in human form )
I was just a pup when my life was snatched away from me," calla started
" my father was the alpha and a rebel pack came to our home and slaughtered my mother and father in front of me ," calla paused trying to ketch her breathe she always cried, when she remembered her parents death. Looking to the little fairy
" they killed everyone, but left me alone, sooner then I thought" call looked ahead as the snow fell harder " I was dragged kicking and screaming, to their land. I didn't want to be with them, they murederd my entire pack, and as I get to their pack. I notice their was only two female's . They were about my mothers age. I ran to the one older woman and begged her to protect me. She hugged me and told me everything was going to be alright, I was sent to live with her till I was a little older then u are today, about 15" calla picked up some snow eating it and continued " when a young wolf goes through something called. Heat cycle it means they are ready to be mated and unluckily for me I was just starting them" calla could picture it perfectly . She was rocking back and forth holding her stomachs crying and screaming till mags, the older werewolf came in and gave her some tea to try and help. " the older werewolf I was living with was named mag's , she was like my mother in so many way's, when I got my first heat cycle, the alpha of the pack Tyler orderd his son Ren to teach me how to fight, for a long two year I was taught by the alpha son how to fight and each day I grew to hate ren, but I started to love him aswel. On my 18th birthday I was told by mag's that Tyler told her that I was to be wedded to Ren, I was furious I didn't want to be this wife, when a werewolf mates it is for life. I wasn't even sure If I could handle fen, see he had these outburst of rage and jealousy when I talked with other people and it came to be a hassle when he murderd one of the few friends I made their. I begged mag's to try and stop the marriage and she agreed with me she went to talk to Tyler and I never saw her for 4 days" calla took a deep breath not even bothering to hide the tears flowing freely down her face " Tyler called a meeting, and everyone was gathered around a figure on the floor I pushed my way to the middle and say Tyler lift his hand in the air and say 'this is for those who dissobay me' and mag's looked at me and screamed 'I love you calla' Ren held me back as his father whipped mag's head off but not before I got one last word from her lips , she told me to run , and that is just what I did, on the eve of mine and Ren's wedding I ran with the clothes on my back and I have been hiding since waiting for Ren and the pack to find me , I know ten very we'll and he never gives up one time he almost had me but I was able to escape but not before I received this,." Calla turned towards the little fairy and showed the three claw marks on her shoulder

Mod
Calla squeashed the little fairy hand and wiped her eyes, " dry your eye's child, I am alright now." Calla did not like that she was crying she felt a warm feeling almost like she had to protect the little fairy, 'must be a Wolfy instinct' she thought
"What about you what's your story?"

Mod
Alice was sneaking around, wearing all black, thin layers, she saw a guy walking around. Smirking to herself she jumped down from the tree she was in and ran up, put pocketing him then running away.

Mod
Alice laughed, climbing up the tree again, counting the money he had, she smirked, What a loser!

Mod
Alice yelled as one of the snowballs hit her in the face, she growled, wanting to kill him now. She jumped down, rage on her face, "You hit me." She said in a threatening tone.

Mod
Alice looked at his tail, she let hers grow, "If I wasnt in a good mood, or you'd be bleeding by now." She said glaring at him, "Don't mess with me."

Mod
Alice glared, then smirked, "Cheak you pocket," and with that she started to run off.

Mod
Alice laughed, still running, "Try to catch me!!" She yelled back to him teasingly, "If you can!"

Mod
Alice wove around trees, ducking around branches that swug out, she laughed as he changed her.

Mod
Alice laughed so hard she fell on the ground, rolling around in the cold snow, snowflacks getting caught in her hair, she just kept laughing.

Mod
Alice kept laughing, snow all over her now, "It soo is!!" She said between laughs.

Mod
Alice laughed more, "Still want your wallet?" She said standing up and dangling the wallet.

Mod
"Fifty-two, ah...this makes it less fun..." Alice said with a sigh, "Want me to check if its swelling up?

Mod
Alice jumped up, climbing up the tree to where he was, "Hmm," she said as she looked at where the branch hit, "It's not swollen but its starting to turn a greenish purple..."

Mod
Alice nodded, "I'm sorry for getting you hurt, I didn't mean too..." She said blushing a little.

Mod
"Okay...just tell me if you need anything.." She said, then brushed her lips against his cheek.

Mod
Alice blushed more, "Don't tell anyone I did that, it's really unlike me, okay?"

Mod
Alice gave him a smile, "Thanks, um..where you headed?"

Mod
"I know a place, there's a hotel up north, I can lead you there if you want, it getting dark anyways." Alice said offering her hand for him a take.

Mod
Alice jumped down from the tree, "It's Alice, you?" She said, waiting for him.

Mod
Alice smiled at him, "Lets get put of the cold...I'm freezing my tail off" she said, pulling him forward.

Mod
Alice walked next to him, once in a while taking a quick glacé at him. "So...how's your life?"

Mod
"Been okay, but I'd wipe that smirk off your face if you don't want to get a fist in your stomach." Alice said flatly, looking straight ahead.

Mod
Alice glared, "What's adorable? Sure as heck it's not me." She said coldly.

Mod
((Oops!!))
Alice gave him a death glare, but her eyes softened, she came closer to him, wrapping her small arms around him.

Mod
Alice realized what she was doing and tried to jump away but she couldn't, she sighed and continued to hug him. "Sorry..."

Mod
"For hugging you..." Alice said a faint blush on her cheek, she cursed at her cheeks for warming up.

Mod
Alice stood there, frozen, not moving, a blush grew even brighter, then she smacked his arm, "What was that?!?!"

Mod
Alice snapped back into her senses, "Hey..this is how it's done." With that she kisses him, right on the lips.

Mod
Alice pulls away, her cheeks bright red, they weren't walking anywhere now, she stared into his eyes not knowing what to feel.

Mod
"Okay..." Alice said, getting close to him, getting very cold in the snow.

Mod
Alice grinned at him, "Thank you!" She said walking into the hotel.