Look HERE to get the character template! 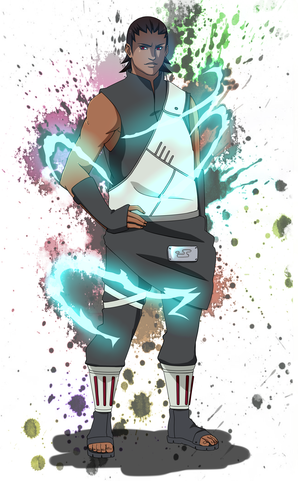 He has red eyes and a muscular build. His hair is a deep dark black, he doesn't have any facial hair and he looks exactly as he does in the picture, his height is just about 5'12 to 6'2 and weighs about around 180 to 205 lbs. His voice is deep but not too deep, if you want an idea of how he sounds, he sounds like Vin Diesel the actor.
Forehead Protector:
Attached to his waistcoat like just in the picture, but he also has one on his forehead too.
Personality:
Akiyama isn't exactly the quiet type. He talks a lot and only shuts up when its needed, he constantly jokes even in dire or serious moments. His favorite things to do is basically read, eat, sleep, train, joke around, prank, pick fights, watch the clouds and of course train more. He has high respects for those that can actually put up a good fight and not just run their mouth about it, he considers everyone and thing even from different villages to be equal and potential friends, unless of course you cross him or the Lightning Village. He really outgoing and will talk to a complete stranger as if he's known them for years, that includes enemies too. His battle tactics are more leaned toward Taijutsu than any other style, by combining lighting style and his weapon expertise with it and his grand speed, which isn't anywhere near that of the Raikage, he is considered a lethal force if you let him get too close.
Clan:
He is a member of the Yotsuki clan on his Mothers side.
Nindō:
The Yotsuki will never sell out their comrades.

Elemental Affinities:
Lightning and Water Style
Combat Style:
He relies more on his speed and Sword fighting than anything else
Weapons:
Four Swords
Two on his back making an X and two on the back of his waist making an X
Special Characteristics:
Kekkei Genkai: Storm Release
Training points:
2,200/5,500

History:
Akiyama grew up as an average kid in the lightning village does, he passed the academy with flying colors, voted highest and best to succeed and all of that important stuff. But of course he just got lazy as time got by, his squad would always get sent on boring missions and weren't getting anywhere in the ranks on their own. After about five years there was an attack on Killer Bee's mountain place and his squad was one of many that went to help out.

During the attack he was able to witness Killer Bee and Raikage fighting together, and Akiyama was in awe and amazement at it. A few month later he found Killer Bee and with a lot of persuasion over another few months he was about to convince him to be his new sensei. After another five years of grueling and harsh and near death training he survived and is now a Jonin and known amongst his comrades and fellow villagers as "Lighting Wolf" and is known to teach and train others.

He knows all of the Basic Lighting and Water style Ninjustu. These are just his favorite ones to use most of the time.
· Lightning Release Armour
· Kirin
· Lightning Rod
· Lightning Style: Shadow Clone Jutsu
· Black Lightning 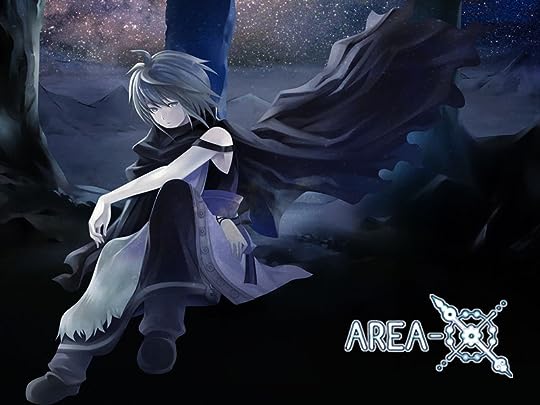 The snow is so Hard and Cold.. Its why it cant be hurt.. It finds a way to blend in with its surroundings by turning to water and giving life to the world around it.. I wish to be like the snow.. Hard and cold and yet.. Able to give life to the earth without being destroyed..

Name: Rin, Yuras
Name meanings:
-First-
Yuras means "Born with the wind" or "Snow born". Again, his parents didn't give him this name. He inherited this name from the orphanage that raised him.
-Last-
Rin is of Japanese origin and means "Snow" or "Severe cold". He never had a last name to begin with, so he just picked this one. Not only because its easy to spell and say, but also because being born in the snow village, he was born for the snow. 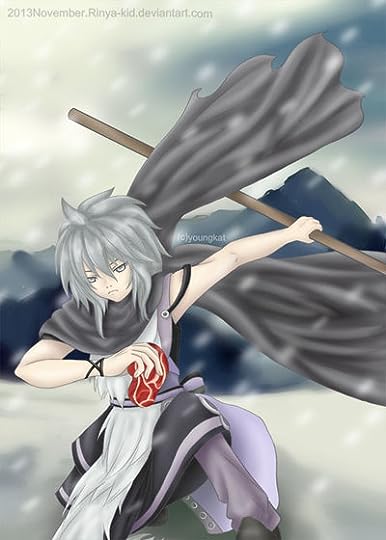 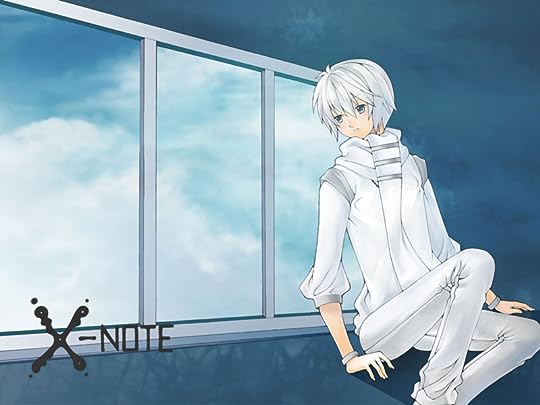 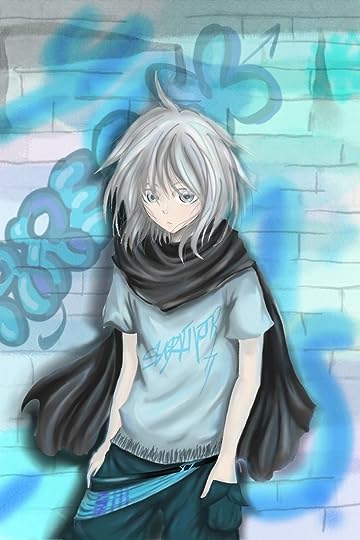 Forehead Protector: On his arm

Personality: Strong like the storm, cold like the snow - an honest, straightforward boy with few words, Yuras doesn't initiate conversations unless you prompt him to.
Yuras' strength will be your best asset. Don't expect much about everything else though.
Yuras rarely shows any emotion, even when shocked or in pain, but is secretly very caring. He pushes others away to keep himself and them from being hurt so he doesn't have many friends. He's very quiet and shows less emotion then Sasuke does, and much like Sasuke also, he craves revenge to those who killed his parents and separated him from his sister. Yuras is one to want to fight by himself, just so he can charge into battle without worrying about protecting his team mates. Although he's emotionless and may seem cold and hard like the snow, Yuras is very protective of his team mates, honest even if it will hurt others, loyal and brave. He will fight with his team mates if he must and isn't one to get in a pointless argument with just anyone. It is quite hard to upset him or anger him but just to push others away, he may seem a bit harsh by remaining silent to those who speak to him, only answering if he feels he should and tries making the answers as short as possible. If you bother him too much, he is often seen getting up and walking away. He just needs someone to not give up on him easily.
Yuras is a gifted boy. He's one of those people that don't forget anything since the day he first came into this world. He remembers his parents being killed when he was a newborn and even remembers his sister smiling down at him when she was 1 year of age, so you can try to frame him, but he'll always know the truth.

Likes:
*Snow
*Coldness
*Dogs
*Ice tea
*Aura Borealis (The rainbow colored lights shown in the sky in the north pole, they're known to show up in the land hidden in the Snow once a year on Christmas at midnight)
*Hunting
*Fighting
*Reading
*Being alone
*Life (secretly)
*Thunder Storms
*Winning
Dislikes:
*Darkness
*When his team mates are in danger (Secretly)
*Weak people
*Working with others (But will if he must)
*Losing
*Sour stuff
*Showing emotion (Makes an acceptance to showing his team his emotions but tries not to)
*Fire
*Being alone (Secretly)

Strengths:
*Snow
*Coldness
*Darkness
*Fighting to protect his team mates
*Showing no emotion
Weaknesses:
*Fire
*Too much warmth (for example, his powers will be weakened if he were to fight in the Land hidden in the Sand)
*Showing emotions
*His "Cold and Hard" Personality
*How calm he is
*How he pushes people away (makes it hard for him to make friends) 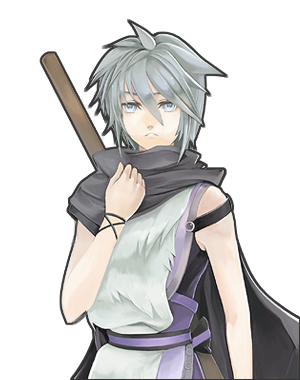 Clan: The Rin Clan. He's the last of this clan. This clan is known to be very powerful with snow and isn't one to be messed with lightly. He came up with his last name, so he has always been the last of his kind but this clan is well known in every village.

Nindō: "I work alone, emotions only seem to get in the way anyways.. Why do I need to be paired up with a bunch of idiots just for you to realize that?" 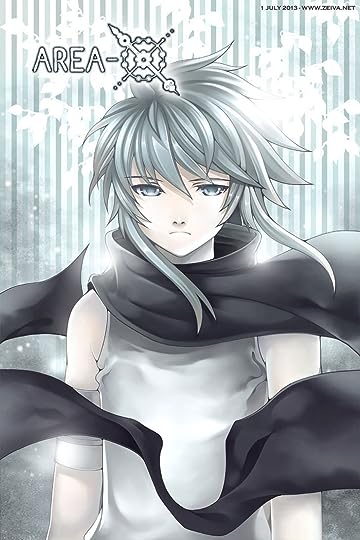 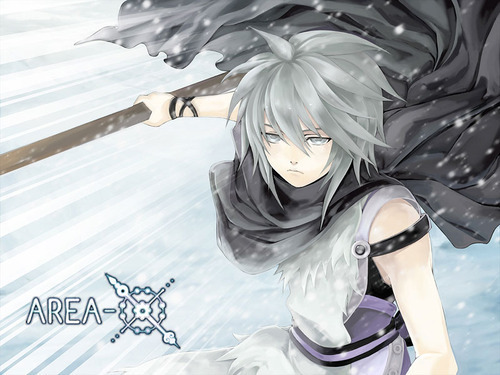 Origin: Yuras originates from the land hidden in the snow, but has moved many times since he lived there

Affiliation: He now lives in the village hidden in the clouds

Combat Style: Yuras usually likes to fight fearlessly. Though, he wont fight you unless he knows you're strong, otherwise he refuses to fight, though he will if you attack him first. He shows no emotion on battle, even when in pain so its hard to know what he's thinking.

Weapon Name: Sunōburēdo, Suno for short
Rank of Weapon: S-Rank
What does it do: Sunōburēdo means snow blade in Japanese and like the name states, this blade gives him unlimited amount of snow use but is stronger in a cold, snowy enviorment, which is why Yuras makes it snow before he goes into battle. This blade allows him to create a snowy area even when indoors and allows him to do anything imaginable with the use of snow. This Blade also goes by Suno which means snow in Japanese. 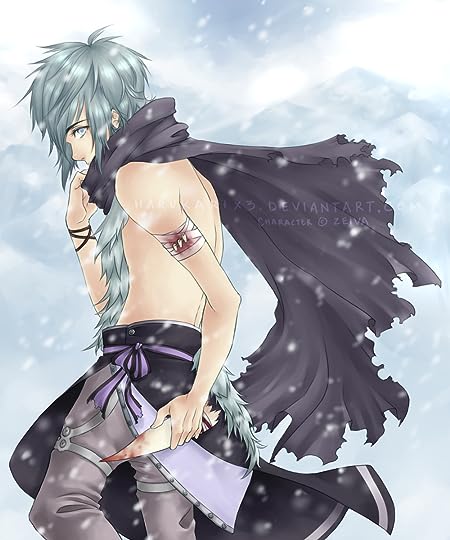 History: Yuras had a rough childhood, which explains his emotionless personality. Yuras' parents were killed on his birth date of December 25th, exactly on Christmas, but him and his 1 year old sister were spared for being so young. He remembers it clearly since he never forgets anything. He remembers the blood on the floors and on the walls and he remembers how confused and helpless he was when he saw his tear stained, terrified sister who he wished even back then that he could of protected her and regrets every waking moment with that memory. Him and his sister were soon separated on his 4th birthday where she was sent to the Leaf village and he was sent to the orphanage in the Cloud village. He remembers him and his sister used to love watching the aura borealis every year on his birthday so after that on his birthday he'd often miss it and be more isolated then normal. He went to the school at the Cloud village and was much more cheerful then he is now. But, the kidnappers returned to take him away again, and since he refused to learn to control his powers because it reminded him of his past, he got quite upset and while trying to stop them from killing the people in the orphanage who took care of him, he screamed for them to stop and he blacked out. When he awoke, the whole orphanage was iced over and everyone in it was dead, including the people who took care of him. He then grew upset and ran off, changing his last name to "Rin", claiming it was easier to say and spell. He then joined the ninja school at age 11 to learn to control his powers better but ever since then he has lived alone and shows the personality that he shows today. He plans on leaving some day when he's the hokage of this Cloud Village in hopes of finding his older sister. 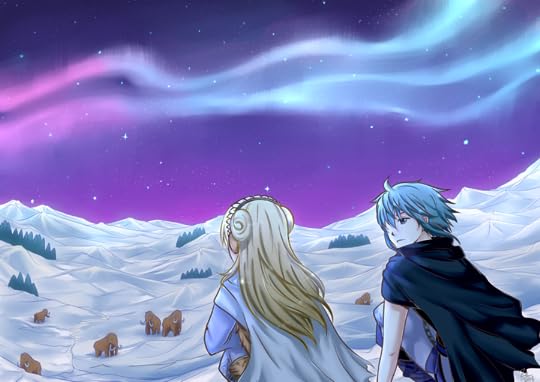 B-rank Shinobi: Anything to do with snow (They call him the snow king or Yuras, king of snow) 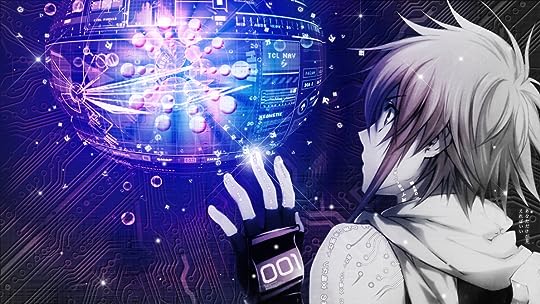