Mod
Arthur Conan Doyle's The Hound of the Baskervilles Crime Novel from 1902.
Dr. James Mortimer asks Sherlock Holmes for advice following the death of his friend, Sir Charles Baskerville. Sir Charles was found dead on the grounds of his Devonshire estate, Baskerville Hall. Mortimer now fears for Sir Charles's nephew and sole heir, Sir Henry Baskerville, who is the new master of Baskerville Hall. The death was attributed to a heart attack, but Mortimer is suspicious, because Sir Charles died with an expression of horror on his face, and Mortimer noticed "the footprints of a gigantic hound" nearby. The Baskerville family has supposedly been under a curse since the era of the English Civil War when ancestor Hugo Baskerville allegedly offered his soul to the devil for help in abducting a woman and was reportedly killed by a giant spectral hound. Sir Charles believed in the curse and was apparently fleeing from something in fright when he died. 256 pages

The story is set in 1888.[1] The Sign of the Four has a complex plot involving service in India, the Indian Rebellion of 1857, a stolen treasure, and a secret pact among four convicts ("the Four" of the title) and two corrupt prison guards. It presents the detective's drug habit and humanizes him in a way that had not been done in the preceding novel, A Study in Scarlet (1887). It also introduces Doctor Watson's future wife, Mary Morstan. 129 pages

I aim to read Hound of the Baskervilles & look forward to the discussions.

I've read both. I have to say I liked The Hound of the Baskervilles the best, as I found The Sign of the Four to drag on a bit - however the content of the latter is more significant to the Sherlock Holmes stories to come thereafter. I really liked the plot of The Hound.

I've never read either. I'm looking forward to reading Hound of the Baskerville. First chapter has gotten my attention.

Mod
I enjoy the relationship between Holmes and Watson, and especially enjoy Watson's way of telling the stories.

I finished reading The Hound of the Baskervilles today. I enjoyed it, especially the descriptions of the moors. But I had expected Sherlock Holmes to have a more prominent role in the book. Yes, he provided solutions, but I didn’t feel he was really involved in the story.

Mod
This is my most loved Holmes novel of the four. The mystery is very intriguing and the Holmes's actions and deductions in unraveling the mystery are very clever.

Pretty good story so far. The woman crying in the night and denying that it happens is kind of suspicious.

Before I read this book i was under the impression that Watson was a bumbling detective. He was actually quite clever and a decent detective. I'm inspired to read more Sherlock Holmes stories. Especially if they are this good. Also, what was Dr Watson a doctor of?

I think he was a G.P. previously working as a British army doctor in Afghanistan.

Trisha wrote: "I finished reading The Hound of the Baskervilles today. I enjoyed it, especially the descriptions of the moors. But I had expected Sherlock Holmes to have a more prominent role in the book. Yes, he..."

In retrospect, I think that's why I like The Hound of the Baskervilles better of the two. Watson usually has the minor role and must often tolerate being belittled by Holmes, even if Holmes might not be aware of his lacking social skills (you wonder why Watson always includes these situations in his chronicles!) ☺️ In this story, Watson gets a more significant role and gets to show off his competence and wits.

Anne wrote: "Trisha wrote: "I finished reading The Hound of the Baskervilles today. I enjoyed it, especially the descriptions of the moors. But I had expected Sherlock Holmes to have a more prominent role in th..."

That’s interesting, Anne. I haven’t read any other books by the author so couldn’t compare. Though I will probably read others in the future.

Anne wrote: "Trisha wrote: "I finished reading The Hound of the Baskervilles today. I enjoyed it, especially the descriptions of the moors. But I had expected Sherlock Holmes to have a more prominent role in th..."

That's a good point, Anne, about why Watson includes the situations where he is belittled by Holmes in the story. I sometimes forget he is the writer of the stories and is thus in control of the story!

I finished The Hound of the Baskervilles while on a train trip to San Antonio. Thus I read the book one chapter at a time each day after a day of touring and margaritas. Haha. I think that influenced my understanding of the book, to say the least!

I enjoyed The Sign of Four more than Hound. I think my expectations for Hound were higher also, so I felt let down. Anyway, a good novel by Doyle.

Mod
I liked Sign of Four more than Hound and a Study in Scarlet. 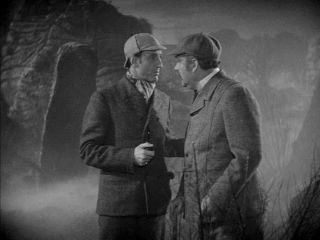 Mod
I thought it was a great representation too!

The sleuths in action 🙂

I read The Hounds a couple of years ago and felt a lot like Trisha.

Trisha wrote: "But I had expected Sherlock Holmes to have a more prominent role in the book."

It was my first time reading Conan Doyle and any Sherlock story. I too missed Sherlock in the book. I was pretty disappointed when I realized Watson was going to take center stage with Sherlock being in a supporting role. Eventually I'll read another Sherlock story and see if I enjoy it more.