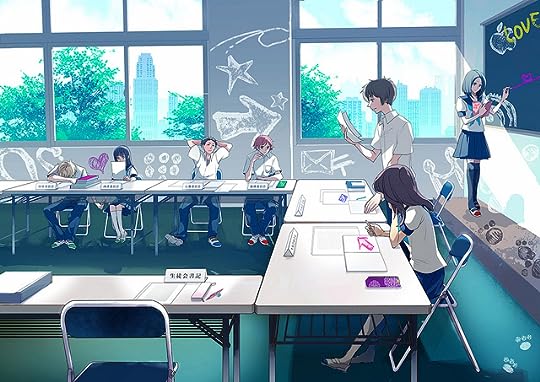 Mod
Alois quietly hums cheerfully to himself as he draws on a large piece of paper, seeming to draw quickly yet amazingly well, smiling at the looks of it. (view spoiler)[ 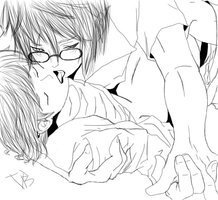 Mod
Claude had been sitting stiffly at his desk, reading what couldn't be indentified due to the cover being blank. He let out a small breath, his eyebrows slightly furrowed as he stood up, beginning to check the artwork of the other students.

Mod
Claude stopped at Alois, staring down at his picture and tilting his head to the side. He was interested. Unlike many of the other teachers, he believed that there were no tabboos in art, therefore anyone could draw what they liked.

Mod
Alois quietly giggles as if he enjoyed drawing this stuff though he hears people whispering and he quickly glares over in there direction, making them immediately shut up. He then blinks at a shadow over his desk and glances back at Claude, immediately smirking seductively,"You like it?"

Mod
Claude blinked faintly, looking away, "Good job" he mumbled blankly, trying to keep his cool. Considering that he was attracted to Alois, and Alois somehow could easily flirt so god damn openly.

Mod
Alois smiles cheerfully,"You really like it?! Yaoi's the only thing i have an interest in drawing, well.. Detailed that is" He smiles down at the picture.

Mod
Claude nodded, "The outline is decent, as well as the exocution, the clothing fringes are nice and the draw back is extrodinare." he murmured.

Mod
Alois glances up at Claude, smirking seductively,"You want it? I have many others at home"

Mod
Claude stared away, "It's fine. You keep it." he replied before walking forward.

Mod
Alois cutely pouts,"Aw.. But i drew it in example of you and someone who likes you.."

Mod
He blinked, Must he be so ... non subtle.. he thought, "Fine. Put it on my desk and I'll collect it on my way out" he replied.

Mod
Alois blinks, smiling cheerfully and gets up, skipping over and places it on the desk as ordered to before he returns over to his desk again to draw some more.

Mod
Claude sits at his desk, discreetly putting the drawing into his wallet.

Mod
Alois hums as he begins drawing this. (view spoiler)[ 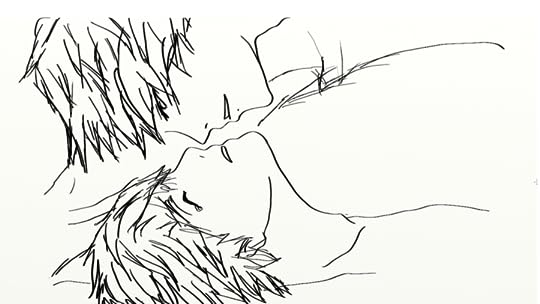 Mod
Claude stares at the clock, Be over school. Be over. he thought.

Mod
Alois glances over at the clock right when the bell rings before he slips his already finished drawing into his bag and stands up.

Mod
Claude sighed, he hadn't had anything better to do. So like any other perfectly sane person would do, he'd probably follow Alois.

Mod
((To the art club!! XD Or.. Chess club? Which one?)) Alois smiles, skipping out cheerfully.

Mod
<< Not sure, how would Claude become his butler? >>

Mod
((Hmm.. Well.. I know how Sebastian will be Ciel's butler.. Maybe Claude could ask Alois? Or Alois could be in trouble and Claude could save him, making them both agree that Claude should be his butler))

Mod
<< Sure, Alois could get hurt or something >>

Mod
((Oks lol ill post in the hallways then))

Mod
Alois skips into the art class 10 minutes before it was to start. Unlike other purple students, he wasn't a loner. In fact, he craved human contact. He wore black pants, white buttoned up shirt, dark purple vest, black tie and a purple jacket like all males in the purple class were to wear. This may of been on the purple and blue campus, but some students from the other campus' came here for art class as well, since it was better then the other art classes.

Mod
((Is there actually any other students? Cause it doesn't say...)) Rosaline walked down the hall towards the art classroom. She may have been royal, but no way that was to stop her from getting her hand dirty with paint. She was wearing her red jacket and tie with a white button-up shirt with a blue skirt, as instructed. She looked down at her watch. Still ten minutes! she thought with surprise. She was going to be early for once!

Mod
((No lol we just gotta imagine they're here XD))

Alois smirks, flirting with some men, ignoring any girls that were to talk to them. Sure, he was one of the cutest guys in the class, but he never seemed to go for women, no one really knew why. It was a shock though that he came to class without his butler following him, perhaps his butler had other things to do, but Alois didn't care.

Mod
Rosaline opened the door to find Alois flirting with some of the guys, like usual. Rosaline sighed and took her seat in the back of the classroom away from everyone else. She liked it back there it was quiet and peaceful and no one seemed to bother her. And it was perfect to look at the board where Claude taught their lessons and assignments. She got out her sketch pad and pencil and began to draw, ignoring the rest of her classmates.

Mod
Tohma enters the class. He was in a purple low cut shirt, black rich looking jacket, black pants and purple shoes with sunglasses and a black hat on, smiling,"Welcome class, please get to your stations. Im Tohma Teguchi, ill be your substitute. Claude has went on vacation for a few days and until he comes back, ill be teaching here."

Alois goes to his usual station, eyeing him lightly though huffs at the mention of Claude. Damn idiot decided to leave without Alois. Oh well, he could go a few days without Claude, right?

Mod
Rosaline looked down. Well this was going to be interesting. she thought plaintively. I mean, it can't be that bad right? She continued drawing while Tohma shed his coat.

Mod
Tohma grabs a piece of paper,"Rosaline, are you here?" He glances around the class, waiting for someone to raise their hand.

Alois huffs, already becoming bored so he starts quietly chatting with one of the other guys.

Mod
Rosaline raised her hand. "Here," she mummered. She stared at Alois and another guy chatting. Rosaline felt like this guy had close to no experience in art. She didn't like him.

Tohma blinks,"Strange.. I thought Claude would of brought you.. You're the only person he talks about.. Then again, he rarely ever talks.." He then checks down their names.

Alois huffs,"Yeah yeah, we get it, he said it was too dangerous, big whoop. I could of handled it." He then goes back to talking to the guy.

Once Tohma finished, he nods,"Ok, now for this next project, ill be partnering up two people together, the list is in the back of the room."

Alois skips over their, checking for his name and blinks,"Who the fuck is Rosaline again?" He asks, obviously having not paid attention to the attendance being taken.

Mod
Rosaline scowled and replied "I am," through gritted teeth. Why the hell am I paired with this jackass! she thought angrily. Great! I wish Claude was here! He never would've paired me with that! she thought, staring at him bounce up and down all giddily. She sighed and put her head in her hands. ((I'm going to go to sleep now...sorry! I'll post as soon as I can tomorow!))

Alois blinks, huffing,"Why the hell am i paired with a girl?! Has no one heard the rumor of what happened to Hannah?!" Ugh! I wish Claude was here, he'd be my partner, even though he's a teacher.. He huffs, walking over to her station.

Tohma nods,"Good. Now, ill give you all to the end of the class to try painting the other person. If its not finished, come back tomorrow before class or today after school to finish it."

Mod
((Again!?))
"What rumor?" Rosaline asked, not looking up. She had already began to draw Alois. She decided to do it from the side to capture some of the important features.
[image error] 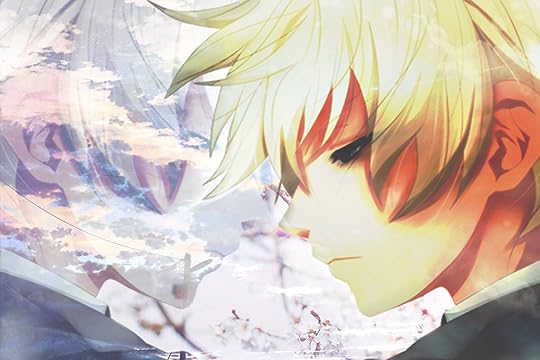 She was almost complete just a few more touches.

Alois glances at her, blinking,"Drawing already?" He huffs,"I wasn't ready!"

Mod
"Well, deal with it!" Rosaline said. She was finished so she got her sketchbook and began to draw again.

The teacher sighs,"And after that, it will be the other persons time to draw."

Alois murmurs,"Finally. Ill do better then that."

He then starts drawing quickly.

Mod
Rosaline looked at Alois in disgust. Why did he have to be here! He wasn't even a demon! and Claude followed him around even though he for sure didn't like him! She went back to drawing her picture and tried to ignore Alois' ignorance. ((Erica Blandelli from Campione))

Mod
((My friend, the one who plays Claude, might be rejoining soon))

Alois huffs, thinking, Damn idiot asked me out then left.. Maybe i should of asked to go instead of expecting him to offer? He furrows his brows at the thought as he continues to draw. (view spoiler)[ 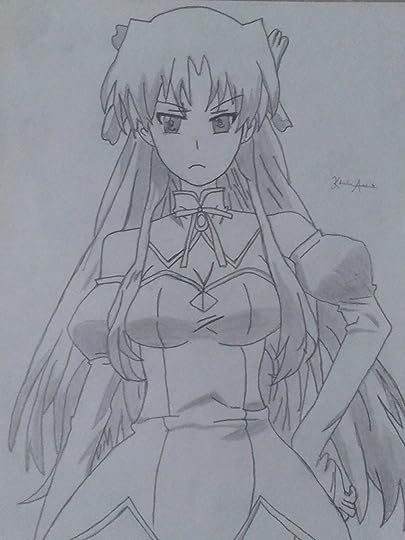 Mod
((Yay!!! That would be great!)) Rosaline looked over. "What's wrong now, Alois?" Rosaline asked sighing. He looked over And scowled. She put up her hands in defeat. She looked at his picture. "Not to bad for a freshman!" she said plaintively.

Mod
((Ugh! I'm offended XD)) "Thanks," Rosaline said sarcastically. "And stop acting so childish! This is high school! And if you don't give a damn, why'd the hell did you join?" Rosaline said angrily.

Alois crosses his arms,"Because the only person who mattered to me became a teacher here." He states blankly, starting to apply the color to the picture.

Mod
There was a soft knock on the door. More precisely, three knocks in a row, each sectioned one second apart methodically.