Mod
Animal Farm a classic, thought provoking and I haven't read it in...well, a long time.

Mod
I'll accept nominations from now until 7/28 and then I'll put up a poll.

I'd like to nominate The Testament of Mary by Colm Tóibín. It's just 96 pages, but one of the most powerful books I've read. This slim volume was a finalist for the Booker.

"In the ancient town of Ephesus, Mary lives alone, years after her son’s crucifixion. She has no interest in collaborating with the authors of the Gospel, who are her keepers. She does not agree that her son is the Son of God; nor that his death was “worth it”; nor that the “group of misfits he gathered around him, men who could not look a woman in the eye,” were holy disciples.

Mary judges herself ruthlessly (she did not stay at the foot of the cross until her son died—she fled, to save herself), and her judgment of others is equally harsh. This woman whom we know from centuries of paintings and scripture as the docile, loving, silent, long-suffering, obedient, worshipful mother of Christ becomes a tragic heroine with the relentless eloquence of Electra or Medea or Antigone. Tóibín’s tour de force of imagination and language is a portrait so vivid and convincing that our image of Mary will be forever transformed."

Fiona Shaw performed this as a monologue piece, which received raves: http://www.theguardian.com/stage/2014... However, the Broadway run of the show ended early, which is a real shame. 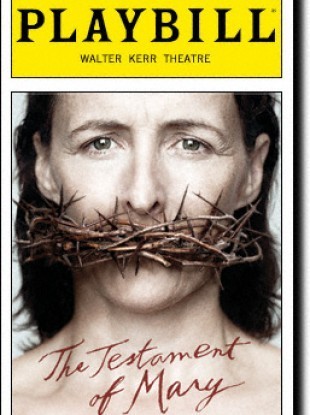 Maybe we should keep a running list of some of the titles not nominated and use that for the poll one month? I would like to nominate G.K. Chesterton's Manalive, but it seems to me we've read him recently and could use other authors.

Galveston, Texas. September 4, 1900. A giant hurricane—destined to be remembered as the storm of the century—is brewing offshore. Fighter John McBride has arrived from Chicago to challenge the local heavyweight champion, a 22 year-old Jack Johnson, as-yet unknown to the broader boxing world. Problem is, Johnson is black and the local Sporting Club doesn’t want him to leave the ring alive. Around this central story, Lansdale weaves a compelling historical tale, filled with prostitutes and gamblers, storm-tossed sailors and everyday citizens. His unflinching dialog recreates a time when racism and violence were facts of life -- Goodreads

I nominate G.K. Chesterton's "The Man Who Was Thursday."

The Bridge of San Luis Rey by Thornton Wilder

Couple of these have been on my to read list for a while.

The Man Who Was Thursday

The Loved One by Evelyn Waugh

I've nominated this before. I haven't read it yet only because my library doesn't have it for download.

I nominate Monte Verita by Daphne DuMaurier. It can be found here:
https://www.goodreads.com/book/show/2...

This novella has romance, suspense, and the supernatural. This is my favorite novella and I hope others will love that novella too.

The Man Who Was Thursday"

We already read this one Dec 2012 - these discussion have all been left open and you can certainly add a comment.

Mod
Still, At Your Door: A Fictional Memoir

Mod
Ronald wrote: "I nominate Monte Verita by Daphne DuMaurier. It can be found here:
https://www.goodreads.com/book/show/2...

This novella has romance, suspense, and the supernatural. This is my..."

Ronald - I will nominate it, but I think I'd have to encourage people to read "Don't Look Now" and "Birds" too - they are brilliant long-short stories.

"Ronald - I will nominate it, but I think I'd have to encourage people to read "Don't Look Now" and "Birds" too - they are brilliant long-short stories. "

I like that idea. Monte Verita + Don't Look Now + The Birds.

Julia wrote: "I'd like to nominate The Testament of Mary by Colm Tóibín. It's just 96 pages, but one of the most powerful books I've read. This slim volume was a finalist for the..."

Hi Julia - The Testament of Mary is an amazing book - one of my all time "new" favorites.