Mod
Join us on Wednesday, August 6, 2014 for a special discussion with author Bobbi Romans. If you have a question for her, please post it in this thread, where Bobbi will be discussing her writing and her books.

Remember - you can post questions here throughout the duration of the Featured Author Read at any time!

I'm around so don't hesitate to ask away.
:)
Bobbi


Do you have any advice for an aspiring writer, like myself? Was becoming an author your dream or passion? What's your inspiration or who is and Why? Also, how do you conceive your plot ideas?

Hum? Lets see if I can do the question justice.

1) Join a writers group. (something very powerful in being around like minded people.) If none in your area, look into online groups.

2) Join a crit group. They are usually filled with newbies and established alike. Also, AutoCrit for picking out overused words. It's a fantastic (cheap) program. I usually do one chapter at a time so I don't faint at how many "was" or "it/there's" I need to remove.

3)Park it and write. No excuses. Just do it. Hit a block, edit in AutoCrit and/or get completed chapters critted or in front of a beta.

Did I know I wanted to be a writer as a child? No. But after so many teachers mentioned and urged, I gave thought. As most teens, the thought didn't last long. Years later, the love returned and I played with FanFiction. (With authors consent I should add) A fantastic author suggested I do my own thing and see where it led me.

And here I am.

Ideas? I'm not joking, real life is so crazy, idea's aren't a problem. I promise this though...

Not one damn one has a back up of laundry or dinner dishes.

How long did it take you to finish your first novel?

1st published nove? About a month. It was a short. It was written in about 2 weeks, then went through autocrit and a crit group before being sent in.

1st book ever written with serious intent? I'm STILL working on. Every time I get caught up to go back to it, I either see another call that interests me, or something comes up.

But its getting closer. LOL

Okay. So I just finished reading "Table for Three - Hold the Blood" and I am dying to know the following:

(1) Did you intend for this to be more spoof like (cuz I'll admit I laughed quite a bit even though it was "horror") or was that an unintended consequence of Shana's character?

(2) Where did you come up with those names of Marklon and Erron? I've never heard of those in my life and I'm in my mid-forties. [Although I'm all for creativity, I have to admit I found Marklon particularly distracting while reading.]

(3) If you could redo any part of this story, what would it be?

(4) I find that every single one of my stories has a little bit of reality from my own life or experiences in it. Is there anything in this story that has the ring of truth to it?

Well done Bobbi. I laughed quite a bit reading this story.

LOL, I died laughing over your update about the story not being a good dinner read.

1) Not as much as it became. I was shooting for an old school 80's, summer, horror flick feel. Like from the old Friday the 13th days. Shana had other idea's.

2) When I start a story, I say the names aloud. Those popped into my head. No, I've never heard of a Marklon either, but kept it since I hadn't. (LOLOL)

3)I would spend more time on their relationship. Particularly in the beginning. More information about them as Shana and Erron, then more with Marklon.

4) The only realm of me in the story is my love for both horror movies and horror spoofs. I can zone out with joy to both. I grew up watching Vincent Price flicks on Sat mornings. He was both terrifying and funny.

Glad you enjoyed AND laughed.

Almost everything I write has a sense of humor found scattered about. I mean... who else ya know has armadillo and opossum shifters?

Thanks Bobbi. I was eating right at the point where I read The Exorcist line and had to draw the line!!!

I can totally relate to characters driving the story in a direction you didn't anticipate. They have a way of doing that. :-)

I also grew up with Friday the 13th and the like and LOVED them. I think your story line was great and really achieved that icky feeling. The last third of the book was really creepy and suspenseful that way. And it was good in that Shana could wise crack all she wanted in the beginning but once it became personal you could sense her fear. It would have been interesting to be inside the head of The Chef for a chapter or two.

Anyway - thank you for the enjoyable read!

Looking forward to your upcoming discussion tomorrow! As an author who writes series, I noticed that you never go beyond 3. Is there a reason for that? I often wonder when the best cut off point is. ie. do readers get familiar with a location/character where they'd rather not see them leave? Would it be better to build momentum with one series rather than starting an entirely new one? Thanks!

Mod
Hi Bobbi - just wondering if you have a specific place where you like to write? We often hear of the differences in writing locations based on the author's introversion or extroversion. Do you enjoy writing in public spaces or do you prefer to write in more of a quiet solitude?

Looking forward to your upcoming discussion tomorrow! As an author who writes series, I noticed that you never go beyond 3. Is there a reason for that? I often wonder when the best cut o..."

LOLOL, you ask this right before book (technically 4) releases in the Swamp Magic Series. I did a 2.5 so am giving the book, a Book 3 title. Dead Man Rising releases shortly.

I think its all up to the characters and story line. Has it been played out or is there still wicked things happening? (wicked meaning wicked good)

I do think many authors though stop at 3, but I've also seen many continue on. To name a few, Kate Douglas, Keri Author and Jeanine Frost.

As far as switching series, I bounce back and forth as you can tell. Every author has their own unique process, so go with what feels right for you.
:)
Bobbi

The series I have is ongoing so I do Volumes - now I'm on volume 2, writing on Book 2. It gives me the option to go back, and add Book 4 or 5 later on, with a different character set - just a thought for you :)

Digiwriting wrote: "Hi Bobbi - just wondering if you have a specific place where you like to write? We often hear of the differences in writing locations based on the author's introversion or extroversion. Do you enj..."

I wish more than anything I had a quiet writing nook. Nope. Kitchen table which of course is the hub of the house. I do write some in my bedroom in the evenings and LIVE for the twice a year writing retreats I get to attend.

That's what happened for me when I wrote my Christmas novella! Casey and Harry were fav characters!

Just read your response to DigiWriting - I find sometimes I get the best ideas in busy places. And, when pressed for time, the writing goes better. Maybe your writing comes faster because you relish the focused-time when you have it!

Hi Bobbi, I was wondering if you find it hard to write for a particular gender i.e. a male vs. female character. Does anything help you get into the mindset of a male character?

Mod
A question we often ponder: How do you select the title for your books? Do they grow from your writing or do you have the title in mind before you start to write?

Adam wrote: "Hi Bobbi, I was wondering if you find it hard to write for a particular gender i.e. a male vs. female character. Does anything help you get into the mindset of a male character?"

Again, depends upon the character. Sometimes one is so vivid, regardless of gender their voice comes through super clear.

I use music or even background movies for certain characters. Say I'm writing his side, and he's a bit darker, I might put on horror movies. Things with raw edges, etc.

Blue Moon wrote: "A question we often ponder: How do you select the title for your books? Do they grow from your writing or do you have the title in mind before you start to write?"

Both ways. 98% of the time I select a title first from the idea I have for the story. Occasionally I will alter the title (my next release started as Iron Clad Contract and became Iron Clad Redemption) as the story progresses.

Mod
Thanks Bobbi. Speaking of titles, if someone were new to your writing, which book would you start them off with and why?

Blue Moon wrote: "Thanks Bobbi. Speaking of titles, if someone were new to your writing, which book would you start them off with and why?"

All depends on what you like reading. I've written horror (humorous though gory) paranormal and contemporary.

Sorry I'm getting into this conversation late!

Bobbi, do you have a muse?

Mod
So Bobbi, give us one for each genre :)

Monica wrote: "Sorry I'm getting into this conversation late!

Bobbi, do you have a muse?"

Pure escape from reality. LOL. We have 6 children total, 2 grandchildren living with us (and their mom) at the moment. Laundry is always backed up as is the sink. Someone is always hungry wanting a snack, while another fed 1/2 their sandwich to the dog.

No chores in romance. ;) (unless you WANT it there)

Blue Moon wrote: "So Bobbi, give us one for each genre :)"

Paranormal: Swamp Magic (I love Moss) and the book is featured in the Boxed Bundle Deal from Crimson right now (Only .99 cents for 10 books, from 10 diff authors)

but I'll be honest...I've picked up the most fans from Damien (an armadillo shifter-no he doesn't turn into, but takes on the qualities of. (he's in bk 2 and 2.5)

(Didn't mean to be so long winded with this.)

Bobbi, incredible that you have TIME to write!

Just read through Swamp Magic so am wondering about your inspiration for "Bog Man" ;)

Monica wrote: "Bobbi, incredible that you have TIME to write!

Just read through Swamp Magic so am wondering about your inspiration for "Bog Man" ;)"

Even as a kid I loved hearing about local legends. Florida has, the Skunk Ape. Really? The best we could do was Skunk Ape? Anyway... I was wanting to write about different kinds of shifters. Well, on my way home one night I saw an armadillo make it across the road. In one piece. Kind of did a WOO HOO for him.

That got me thinking.

Lets have a better legend "Bog Man" with alternative shifters.

Plus, (these are from house/yard and even vacations) seemed fate pointed me in that direction. 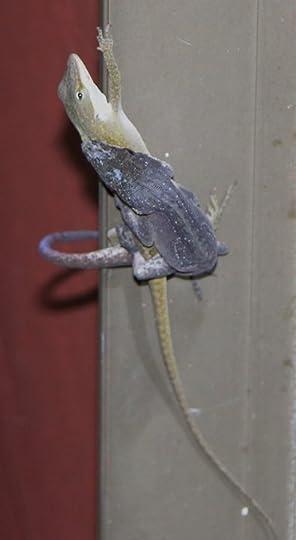 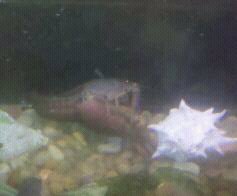 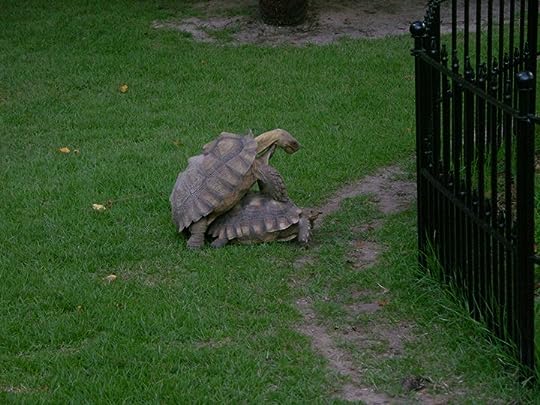