It's as big as, well, a football field! 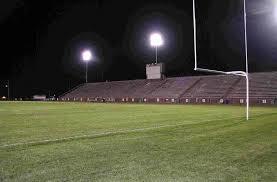 ((I'm gonna start at the end of a game so they can actually talk and stuff :p))

Malachi ran a hand through his sweaty hair, looking around at all the people on the football field after a game. Their team had won. This made him happy, of course, and all the guys were patting each other on the back and congratulating one another, but he was focused on something else. Or, someone else, rather.
The guys had gotten so sick of Malachi talking about Jessica, the cheerleader who he's had a crush on but couldn't get the nerve to talk to, so they made a deal with him: if the team lost this game, he could talk about her as much as he wanted and no one could complain. But if they won, he would have to finally talk to her or never mention her name again. Either way he won because he would have talked to her eventually. Maybe.
His eyes finally landed on her talking to the other cheerleaders. He bit his lip. "Here goes." He said to himself and strode towards her.
"Hey, Jessica, right?" Of course he already knew that was her name, but she didn't have to know that.

Jessica turned when she heard her name called. She turned and looked up into the face of Malachi and her cheeks immediately reddened. She'd had a crush on Malachi since he had started football. That was one of the reasons she had started cheerleading. Her friends had always teased her about him, and she had always brushed them off. She never thought that he would be talking to her. She didn't think that she was that pretty. She turned back to her friends and said, "One second." She turned back to Malachi and apologized, "Sorry." She blushed even brighter and hoped it wasn't as bad as she felt.

"I'm Malachi." He grinned like a dork. What next? His brain scrambled for the right words to say. You're pretty? How do you do? Why did he suddenly forget how to speak? He finally opened his mouth to speak again, but what came out was Latin.
"Te respicere pulchra." He cringed inwardly. Smooth, Malachi. Real smooth. Good thing Latin is a dead language.

Jessica's jaw dropped open and she laughed and blushed at the same time. "Gratias tibi" she said. She had learned Latin in her first year in high school. She was shocked that he also knew Latin.

((Do you want them to go to the spring fling together? I entered my character already.))

((Yeah, if you want. We have until the end of March for them to become a couple and go))

Malachi knew that if ever there was a time when he blushed, it'd be now. "I-uh- didn't think you'd understand." He rubbed the back of his neck. "You speak Latin?" He was already starting to like her even more.

She nodded. "I've been speaking for a while now. I was shocked that you knew Latin. I didn't know anyone else knew it." On the outside, she was blushing, and smiling, and on the inside, she was jumping up and down with joy. She really liked Malachi so far, and she was liking him more and more as they chatted.

"I also know Hebrew and Spanish. Not that you really had to know that." He shrugged. "Would you maybe wanna hang out some time?"

Was he asking her out? Her heart raced with the thought. She had liked him ever since she had seen him. She nodded and said, "Yes, I would like to very much." She hoped she didn't sound to eager. She loved the thought that he spoke Hebrew and Spanish as well. She smiled at him.

"Cool." he grinned cheekily, "I'll see you at the Spring Fling, then." Was it gutsy to take her to the spring fling as a first date, and to assume she'd be okay with it? Did he care? Heh, no. It would be great, he would make sure of that.

She smiled at him and said, "See you there then." She was so excited, she could hardly contain all her excitement. She was already picking out her dress and her outfit.
((Do we want to skip ahead to the Spring Fling?))

((Yo I'm gonna be taking a break from RPs for a little bit cause school is getting crazy. Maybe for a week, or maybe even a month, I really don't know, but wait for me cause I'LL BE BACK!😂 also I apologize for taking a break right in the middle of the Spring Fling, Malachi will make it up to Jessica somehow))

((Okay, thanks for letting me know.))

Jason arrived on the field. It was midnight and he had a bag with him. The stuff inside the bag he needed to use to prank his rival, Colt Creed, aka the guy people were more focused on than him. He needed help to pull off this prank so he asked his roommates sister to help him. "Where is she", he said.

"Im just making sure its me who the college scouts notice more than the campus football golden boy", Jason said turning his head to her. "I need you for your lockpicking skills, i have to get into the locker room and put a powder in Colt's bodywash that will make him itch. I thought about adding hot pink hair dye in his shampoo, but im not that cruel", he added. He knew their was no security in the locker rooms and he was greatful for that.

"Their was more in this prank like switching his granola protein bars with chocolate protein bars since chocolate makes him throw up, but someone revealed Colt's dark past. I do like to prank my rivals, that person went too far. My cousin still thinks i had a hand in it somehow", Jason said. He grabed his wallet and pulled out a 50 dollar bill. "Here you will get anouther 50 once we are finished this prank", he added while handing the money to her.

"Your brother never told you. Well im also offering to buy you and your brother, dinner if the prank is even better than i think it will turn out," Jason said. If no one catches them, he may have have to put Indy on payroll for future pranks on Colt

"Well i am in one of the most powerful football dynasties", Jason said. He would have brought a couple of cartons of cigarettes, but he is famous and someone would most likely take photos and send them to TMZ Sports.

He led her to a building behind the field and to a door that had Blue Lake Dolphins Football Locker Room, written on it. "This is it, the door is just a normal locked door, no timer, slient alarm, or keypad", he added as he stepped back so Indy can do her part in this.

"Every male im my family , with the exception of my cousin Brett, plays football and we go pro. As for Colt he has shut everybody out except his boyfriend/roommate Sebastian. Eversince that person told the campus about his past, he only leaves his dormroom for class and practice", Jason said holding the bag.

He began to think about Indy's commett about cheating and hot bad Colt was hurting inside. This would hurt Colt even more and he wouldnt even trust his own teammates anymore. Then he realized this was a mastake.

"Indy stop, I cant do this while my rival is hurt and broken inside. Come on i will give you the other 50 bucks on the field", he added and began to walk back to the field

"Ok but keep the 50 bucks. Think of it as either an early birthday or Christmas gift. How about instead of Chinese food i can take you to the arcade and battle each other in lazer tag and bowling," Jason said

"Im sure after all my father, uncle, and brother are mutimillionares. As for Chinese food, i prefer Thai and Japanese food, when I want Asian food. But i can accept the counter counter offer", Jason said bringing out his left pinkie to seal the deal

"I agree no take backs", Jason said shaking her pinky. "I never heard of Pho food, may have to try it out, one day", he added. This whole prank may have been a bad idea, but it did make him and Indy potential friends and gave him one more person on his side of the rivaly

"I will tell your brother the time and location", Jason said

{unless the roleplay is finished, right? we’re finished :)}

((No Wish, it has to be two weeks after the RP is finished. Its stated in the rules))

{I think they mean if the rp isn’t finished but no one’s posted in two weeks, then you can start.
but maybe I’m wrong, that’s just the jist I’m getting. because if a roleplay is finished, then what’s the problem with starting another there?}