((Hey I was just wanting if you wanted to rp with my character Phoenix? Blake and her to make a great match.
Name: Phoenix Aria Jenkins

Species: Half dark angel, half vampire. 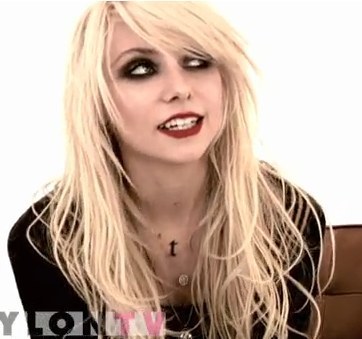 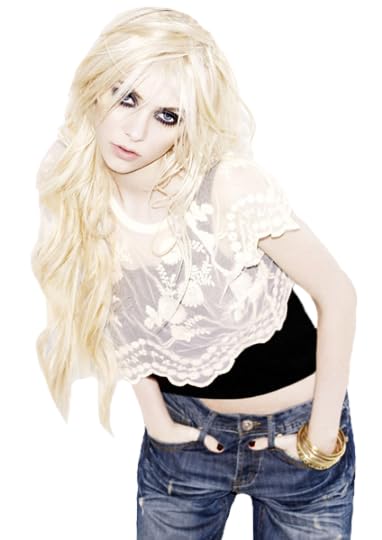 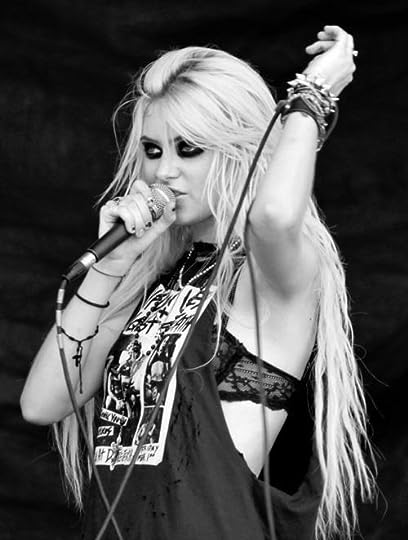 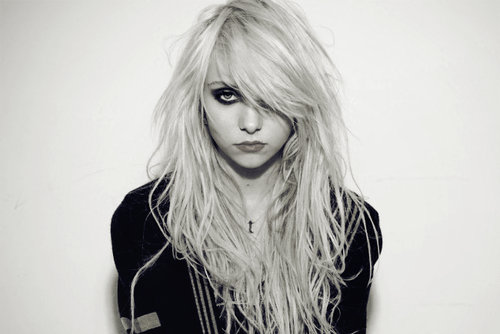 Personality:
Phoenix Jenkins is a wild troublemaker. She attends parties and always makes sure she is the life of them. She is rebellious against her parents and refuses to be the perfect girl they want her to be. She has no fear in her actions and never thinks them through before she goes along with them.


Late nights out with friends drinking has gotten her in trouble with the law. She has a bad temper that is easy to set off with the right words. She never fails to come up with a witty comeback to go along with her snarky attitude.


Phoenix lives young and wild as if she wouldn’t wake up to see the next day. She doesn’t believe in love at first sight or happy endings, especially since nearly everyone she meets rubs her the wrong way.

Phoenix is very stubborn and once her mind is set on something she won't change it. Once she trusts you she will protect you with her life. But she doesn't trust many people, it's very hard to earn a good status with her. But once she opens up she can be just as sweet as the next girl, if you're lucky.

Name: Blake Reynolds
Age: 17
Year: 11
Species: Sorcerer
Gender: Male
Relationship status: Single
Appearance: http://media-cache-ec0.pinimg.com/236...
History: Blake realized he had powers around the age of 13, but hid it from his parents due to the fact that he knew they wouldn't believe him. Otherwise, he had a normal teenagers life. But after his mother died from a tragic accident, that all changed. His father, in his grief, abandoned him and his sister Chandler in the middle of nowhere with no supplies capable to help them survive. It took them months on end with only a few scraps picked up here and there until they found Auris, and they are eternally grateful.
Personality: He's confident about anything he does and comes off as a really cocky and mischievous character. He doesn't show his soft side often, but when he does, it's normally short, sweet, and to the point. He doesn't talk much about his past, he's tried his best to block it out as much as possible. The only thing left from his past is his ferret and sister, who he would do anything for and protect with his life.
Pet: http://upload.wikimedia.org/wikipedia...
Skills: He can control mainly water and ice for the most part. Sometimes air and earth, but not as often.
Hall: Sorcerers Hall

(Yeah sure, that'd be great. Where should we have them meet?)

(How about we do the second one? That one might have a more interesting story)

Blake walked into the dorm and let his pet ferret down from his shoulder to run around the room as it pleased before checking the place out.

Daniel knock the door and then open it, there was a guy in there, his roomate, Daniel though... He put his bags on a bed and walk to the guy "Hey, I'm Daniel, Your new roomate" He said smiling

"Hey, I'm Blake." He smirked and pushed his sunglasses to the top of his head, sticking a hand out for him to shake.

Daniel shake his hand "nice to meet you..." He said watching him into the eyes

"Yeah, you too." He took his hand back and picked up his ferret who was scratching at his feet, putting him back onto his shoulder as he wandered around the dorm a little more.

(It's all good, and yeah that would be great)

Phoenix barged into the random room. She was panting heavily. She slammed the door shut and leaned against the door listening for footsteps.

"Uhm what the hell are you doing in here?" Blake asked the girl rudely, walking over to her.

Daniel stayed in silence watching the girl enter the room... 'WT* with that girl' he though...

"Oh don't get your panties in twist, I'll be gone soon," Phoenix replied waving the guy off.

"This is our dorm." He said, motioning to him and Daniel. "So get the f- out and find somewhere else to hide before I drag you out myself."

"I'd like to see you try pretty boy," Phoenix replied confidently. "I'm in the mood for a fight," she said walking up to him. She leaned in close to his ear. "Bring it," she whispered.

"Fine." He smirked and threw her over his shoulder with ease, reaching to open the door.

Phoenix extended her wings and flapped them hard. She smacked the mystery guy with them and successfully pulled away.

"Stop BOTH of you! My God you look like a married couple..." He said watching them in a 'Fail of a fight', still lay down in his bed maintaining calm

Blake ignored Daniel's request and chanted a spell under his breath, which turned on the sink without him having to do so himself, and soon enough an abundance of water shot out, aimed directly at Pheonix.

Daniel was a shade rate 5, so he had the ability to stopped the water... "No..." He said stoping the water in the air and using to stop the fight

Phoenix cocked her head. "And I thought I had anger issues," she said with a laugh. She let herself back to the floor. "Impressive performances from both of you really," she smirked. She looked at the guy who had started this," but I've seen better."

Daniel was still laying on the bed, he didn't made a great effort to stop the water, he got it back to the sink without saying much

"That was nothing." Blake snorted. "At least I still have more skill than you ever will. So do you mind getting out now? I'm sure that whoever you were hiding from, because you're such a p- you couldn't face them yourself and fight, is gone now."

Phoenix rolled her eyes. "If watch your tone. You wouldn't want to piss me off. Especially when I'm feeling... hungry," she growled, then ran her tongue across her fangs.

"Does it look like I care? I could just perform a protection spell and nothing will happen to me." He smirked and laid down on his bed with his arms behind his head, his ferret Jinx crawling up onto the covers and laying on top of Blakes' stomach.

"Fair point," Phoenix smirked. She jumped on the bed next to the guy. Honestly he was lucky he caught her in a good mood. She had just pulled the prank of her life. Little did he know that she had gotten some of her mothers vampire powers and could make him hurt himself at the snap of her fingers. The perks of mind control.

"I love your ferret... It's so cute..." Daniel sadi clapping twice to call his Red Panda

"Thanks, his name's Jinx. I like your panda." He directed towards Daniel before looking back towards Phoenix. "What were you running from anyways?"

Phoenix smiled, "I pulled a stupid prank and ended up breaking a cop's car antenna off."

"Sweeeeeeeeettt." He draws out. "Wish I coulda been there to help."

"Mm. Wasn't that fantastic. I just strung fishing line from one side of the street to the other. It's hilarious to watch someone flip the f*** out when their antennae snaps back against their car windshield and have no idea why," she smirked.

"Still better than anything my sister would allow me to do. She's such a goodie goodie, I have no idea how we're related." He snorted.

"Gross. Goodie goodie? How do you live?" Phoenix snorted.

"To be honest, I don't know. Although she's a pain in the a--, I love her to death. She's all I have, other than Jinx." He shrugged nonchalantly and pet the ferret a couple times.

Phoenix smiled," that's more than I've got. I wouldn't know."

"Really?" He turned his head, her words pricking his interest. "What's your 'oh so sad' story?"

"As much as I would love to tell you. I wouldn't want to bore you to death. Plus it's not something I talk about. I don't like the attention that comes with it. And it's the past. I like to live in the present and have a little fun. Not dwell on what used to be," she shrugged.

"Hmph, a girl after my own heart." He said and stayed silent for a moment before speaking again. "I'm not one that's into much attention. I just do whatever the hell pleases me, and if others don't like it, they can piss off."

(Hey guys, I'm gonna be going on a mission trip for 5 days and were not allowed to have our phones so I won't really be able to reply....sorrryyyyy)

"I completely agree," Phoenix smirked. Finally someone who understood how she thought. This guy was like a breath of fresh air.

"That's nice to know. Normally people get offended, which personally I find really stupid." He said and looked over to Daniel, giving him a quick wink and mouthing the words 'I got her in my bed'.

"Easily offense people are so annoying. But I love to argue. So I don't mind sometimes. Just makes it more fun for me to criticize them more," she shrugged. She acted like she didn't hear what the other kid said in his head.

"That's nice to know. Normally people get offended, which personally I find really stupid." He said and looked over to Daniel, giving him a quick wink and mouthing the words 'I got her in my bed' jokingly.

"Huh, nice logic." He smirked. "Arguing is pretty fun, especially with my sister. She comes up with the worse comebacks. (sorry. phone spazzed(

"I excel in comebacks. It's something I pride myself on," Phoenix said with a smirk.

((It's fine. My wifi sucks so it might take a long time for me to reply.))