How would you define art (as it relates to sex/nudity) and erotica and pornography? What are the differences or similarities?

Art you want to look at and appreciate, perhaps from a slight distance. It captures moments - maybe at a different angle from the usual.

Erotica you want to be a part of. It gives you the essential emotions and movements while leaving something to the imagination.

Pornography is like an instruction manual (sometimes poorly translated from Chinese) - tab A into slot B, add slight variations, ad nauseum.

Art -- You can look at with your grandmother standing next to you. She may *tisk*tisk* but you don't care.

Interesting question. I'm an artist, and the distinctions are quite slippery, not at all easy to define or separate into clearly marked boxes. I feel quite certain that some works qualify for all three designations, but the terms are highly subjective, too.

In life drawing class, working from a nude model always seemed detached from sexuality, to me, even if the model was very attractive. You stare at the naked figure posing in front of you for hours, trying to faithfully capture or cleverly interpret the form on your pas of paper. Looking at the resulting sketches or paintings does not generally convey anything erotic, mostly because of the static pose in an academic setting. The models were not arranged for us in luxurious beds like in Manet's famous work, nor were the poses deliberately provocative. So that's one kind of nude art form, at the far end of the spectrum from erotica or pornography. Anatomical, observational, concerned with technique.

I've also participated in several exhibitions with a theme of erotic art. You see a pretty wide range of interpretations submitted in response to a prompt like that. Often there is some element in the composition or presentation of a nude figure, in that setting, which is trying to emphasize sexuality. That could be just rendering a naked body as beautifully as possible, or it could focus very intimately on a detail that draws the viewer in, or it could depict a connection between two people, through touch or expression. Erotica presents the body as something more desirable, rather than clinical or simply as an object in space and light.

Art is what you make of it. Every piece is completed by the viewer.

I'd say erotica is the art and pornography is a means to an end?

Caitlin wrote: "I'd say erotica is the art and pornography is a means to an end?"

I agree with this, and also an artist here.

Pornography is meant to get you off, without any intention to do more or keep your mind occupied with it. It is completely replacable and undetermined, most any which will do.

I think we're too busy labeling and categorizing things to simply enjoy them.

Margo - a.k.a. she who is forever behind on her reviews wrote: "For instance I had a co-worker who felt the Victoria's Secrets ads on TV were pornographic and was horrified that his children might see them. " 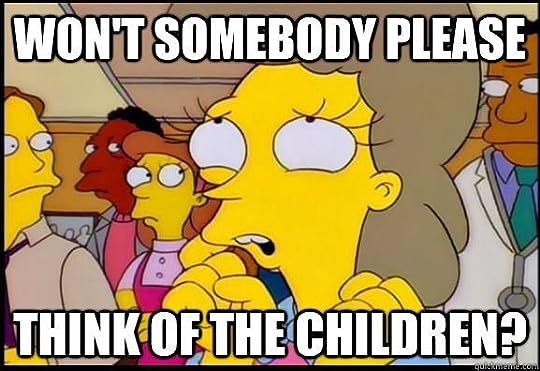 Margo - a.k.a. she who is forever behind on her reviews wrote: "Since people's perspectives vary so greatly, I think it's important we allow a wide variety of materials out there, and then let people choose for themselves what they want to see. ..."

have the potential in the hands of a zealous prosecutor to cause enormous problems for the viewer and owner. Which goes in much of Europe, definitely in the UK, also for a lot of merely written content. 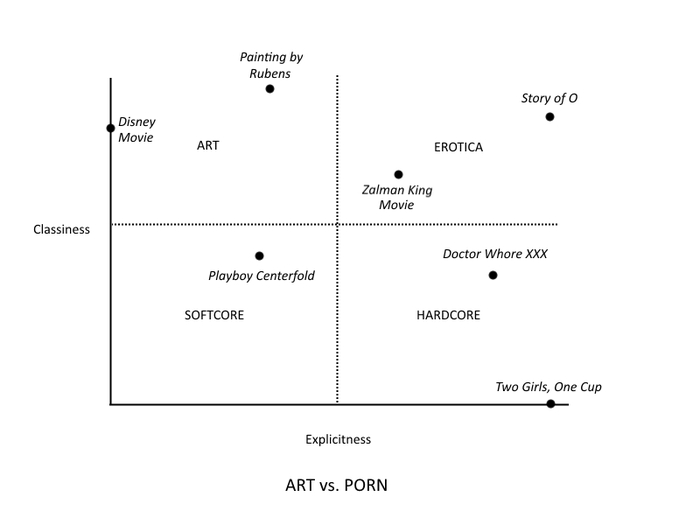 Charting the constellation of ambiguous designations? Lovely piece of graphic art! (But not too graphic.). :)

Art is about highlighting the nude form.

Erotica contain nudity of hints of it, but it is really about highlight sensuality.

Pornography is about highlighting graphic depictions of sex.